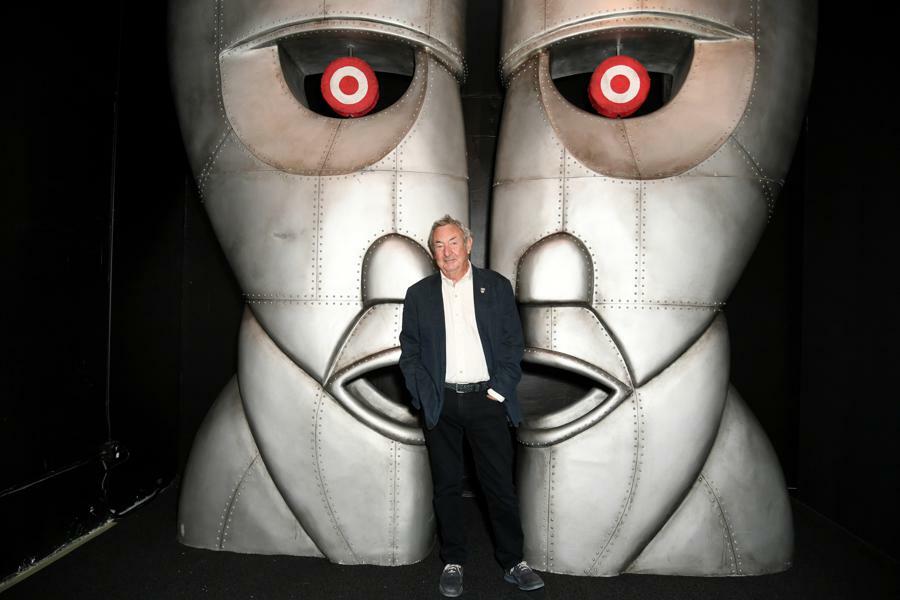 As a kid growing up a proud music geek there are moments you think would be cool — meeting your heroes, being backstage, typical rock star fantasies. Then there are those moments that are so far beyond your wildest dreams that this quote Steven Van Zandt once said to me sums it up best: "You couldn't have dreamed my life."

Touring a Pink Floyd exhibit with more than 400 artifacts chronicling every phase of the band's career, including Dark Side Of The Moon and The Wall, with Pink Floyd drummer Nick Mason definitely falls into the beyond your wildest dreams moment.

But I had that experience recently at the opening of the exhibit, Pink Floyd: Their Mortal Remains (which runs through January 9), at the new Vogue Multicultural Museum in L.A. Mason, who flew in for 24 hours for a VIP event and opening day, seemed as overwhelmed by the exhibit as the fans.

As we discussed during our interview, it's not often as an artist you get the opportunity to go back and see your entire career laid out in a museum. Some of the pieces, like attire and characters from The Wall and the iconic pig from Animals, were obvious. But others were brand new discoveries for longtime Floyd fans.

Fan Paola Mondragon was particularly impressed by the 1975 tour comic that  Mason explained was initially met with resistance, but is now, of course, a collector's item.

And the simple fact is seeing all of this and hearing the story together, from the early Syd Barrett days, to the post Roger Waters days, seeing the band's early instruments, ticket stubs, concert posters, so much of the iconic artwork from Storm Thorgerson (who did their album covers) and more, underscores the weight of Pink Floyd's legendary career. Very few artists, as Mason and I discussed, lend themselves to a museum retrospective.

I spoke with Mason about what other artists could carry an exhibit like this, the underrated Pink Floyd albums in the catalogue, what the exhibit means to him and more.

Steve Baltin: I imagine an event like this prompts a lot of memories because when you are in the midst of something of course you don't have the time to think about The Wall being number one in America.

Nick Mason: Yeah, that was a very curious thing. I think no one...maybe Bob Ezrin did, 'cause it was Bob's idea to set it at that particular disco tempo. But I remember 'cause we were over here when it was number one in the UK. And it's always a little bit surreal, because you're not actually experiencing it.

Baltin: Exactly. So when you get to come to this, does it trigger a lot of memories of things that you hadn't thought about in a long time?

Mason: Yes, absolutely. The comic, it's one of those things where you think it's lasted really well, it still makes me chuckle just a little bit. [chuckle] But it was bordering on a disaster in terms of the audiences 'cause it was an alternative program. But they didn't get it at all. They wanted a proper, shiny, nice program and this didn't do it. So we ended up, I think we took them to Japan and gave them away for free and most people didn't bother to take them home. They just didn't... I mean, it would have been a little bit odd at the time for the Japanese to have understood the joke. 'Cause these are very, very geared to a period that was sort of like the '50s, actually, when comic books had these sorts of stories in them and this sort of illustration.

Baltin: So when was the last time for example, that you thought about this comic or looked at this comic?

Mason: Well, curiously, until probably 10, or 15 years it have haven't crossed my mind. But it's in my mind now because not only is it here, but I just had an email a couple of days ago from someone who's doing a full-on study or a PhD or what something entirely on this comic and nothing more.

Baltin: Obviously, one of the cool things about this exhibit is you highlight the lighting, the production, all these people who helped make Pink Floyd what it was and I was lucky enough to get to interview Storm a couple of years ago. When you look at this artwork, are there things that it triggers as well? Because as you say, there's so many people involved in all of this.

Mason: Well, yeah. I think that's one of the important points about this whole thing is an understanding that it's not just the band, it is a band with all sorts of really good people. And the fact of the matter is, the more successful you are, the better the people you can have, yeah, working with you, and particularly someone like Mark Fisher, who did all the spatial design stuff and technology that went into that was fantastic. No band could have done it on their own.

Baltin: It's funny too to look at these line-ups, Steve Miller Band, Captain Beefheart. Are there particular shows that stand out to you as you think back on all this stuff?

Mason: Usually, the sort of the beginnings of the first Dark Side shows the ones where we almost were rehearsing it before we took it into the studio, and in some cases, ditching things that are on the run, there's a version of it which sounds almost like a jazz band playing in sort of weather reports or something and then we scrub that and did the VCS3 loop instead. Yeah.

Baltin: Are there albums in the catalog that it makes you sort of go back and revisit songs or look back on it in a different way because, again, it's been a long time?

Mason: I think not so much. I mean to me, the real album going back is A Saucerful Of Secrets because I still feel that some of the music on that is some of the best we ever did and there are ideas there that can clearly be seen to be taken forward and used perhaps in skipping the Dark Side and going to Wish You Were Here.

Baltin: So, when you look back on it, then what are one or two of the moments from A Saucerful Of Secrets that really stand out to you?

Mason: The title track, I think that was a real leap for us in terms of moving on from something having to be a song length to being something a bit more elaborate, and when that sort of found its way into Meddle, and then on from Meddle into Wish You Were Here.

Baltin: There are certain milestones you hit in your career, whether it's sold-out shows, stadiums, Grammys. But not many people get a museum exhibit. Could you have ever imagined?

Mason: No, one would never. When we were appearing on the Top Of The Pops in 1967, I assumed that I would be back at architecture college a year later. They held a place for me. That's the thinking.

Baltin: So what would your 22-year-old self say about having your own museum exhibit in Hollywood?

Mason: I'd say, "Well done, good work."  I think most bands could do quite interesting exhibits, which they did. But for us, we have a slight extra lead on it because there were so many graphics, because when everyone suddenly discovered television screens, and so on, we never actually used them on us. We always made films to go with the music, but we did other things to augment whatever was going on. And consequently, we have a raft of different sorts of graphics, Gerald Scarfe's stuff, but a lot of other things as well. And I think that's why, in a way, it made a difference. I remember saying to some other people that I nearly scotched this whole thing, because the director came to talk to me and I just said, "I don't think we can do it. We haven't gotten the stuff. We don't have the wardrobe." In fact, wardrobe consisted of Roger's coat, two shirts, and a t-shirt that had Pink Floyd in it. But of course, that's not what you need. And so there was a way.

Baltin: As a fan, who would be a band that you would want to see an exhibit of? Because you bring up a good point. There's very few people that have that visual component.

Mason: Well, I suppose, inevitably, it would be some of the big, similar to Michael Jackson. You'd present it in a different way, but you'd have endless costumes, you'd have endless video that you could show of different things he did. Because he embraced the whole thing as a theatrical event. And even a collection of his videos is pretty good from that point of view, because they go from the Jackson 5 and, what was it, called Soul Train or something, right the way through to his mega shows.

Baltin: What do you hope people take from this when they come through? What's the coolest thing that you could hear from people as they walk through this exhibit?

Mason: Well, the two coolest things is, one would be I never realized that, and that could be almost anything. I never realized that so-and-so did that, or did that. And I think also, the other great thing would be to hear a kid saying, "You know what, I wouldn't mind working on something like this," pointing at maybe some tech thing or whatever. They might just think there is more to this than just appearing on the television or on stage. There were a lot of other people doing really interesting, expert jobs. That would be nice. And then I'm very happy to hear people saying, "Oh, God, I remember that. Yeah, it brought back memories of all those drugs I did."

Baltin: Going back to A Saucerful Of Secrets does it also feel like an opportunity for people to revisit and understand there's so much more than The Wall and Dark Side?

Mason: Yeah, although, in a way, I'm not sure whether that would particularly happen, really. Whether they would discover the album, they might go away and go, "Oh, maybe I will check out the early work." There's not enough music here to really, really grasp the range for instance, the Syd Barrett catalog. There are maybe one or two almost like free jazz items, like "Interstellar Overdrive." But the rest of this entire catalog is a really extraordinary mix of pastoral, almost folk songs, and slightly more chapter 24, the I-Ching. Yeah.