By Jason Burke and Zeinab Mohammed Salih in Khartoum
SudanKhartoumPolice

Security forces in Sudan have mounted a fierce crackdown in recent days to crush remaining unrest, six months after a coup that brought a military regime to power in the unstable strategic country.

Police fired teargas and shotguns at protesters as thousands took to the streets in the capital, Khartoum, and twin city of Omdurman on Monday. The violence followed a similarly harsh response to demonstrations over the weekend. In all, 113 people have been injured and one killed in recent days, according to doctors.

Ninety-six protesters have been killed since the coup in October last year, and more than 1,500 detained.

Security forces have carried out a wave of arrests targeting the resistance committees, a network of informal associations that have organised most of the protests. Nazim Siraj, a high-profile pro-democracy campaigner known for organising medical assistance to injured protesters, was detained on Sunday.

“In the last few days, they have increased the arrests. Two from our [resistance] committee were taken at the weekend. There have been lots of other people taken. We are keeping a low profile these days,” said Yousef Abdallah Adam, a 35-year-old painter and decorator who leads a pro-democracy “resistance committee” in south Khartoum.

Legal representatives said 80 people associated with the protest movement had been detained in less than two weeks. Many have been dispersed to prisons around the country, often hundreds of miles from their homes.

“The authorities believe the wave of arrests will have an impact on the momentum of the protests but the resistance committees will continue to exercise their right to peacefully protest despite the pressure on them,” said Osman Basri, of the Emergency Lawyers’ Association in Khartoum. “They will not stop until they achieve a civilian government”.

The October coup came two and a half years after the 2019 popular uprising that led to the fall of the veteran dictator Omar al-Bashir and derailed Sudan’s move from a power-sharing arrangement to democracy. It prompted massive protests, with huge crowds in streets in cities across Sudan denouncing both the military takeover and a subsequent deal that reinstated the prime minister, Abdullah Hamdok, but sidelined the pro-democracy movement. Hamdok resigned in January, saying he was unable to work with the military.

Though protests this weekend were the largest for some time, the pro-democracy movement is struggling to mobilise big crowds.

Many had been injured in previous demonstrations and the mood was defiant. “I was protesting against Bashir, against the army rule afterwards, against the coup too. We are many and we will win,” said Momin Ahmed, 27, who has yet to regain the full use of an arm after being shot earlier this year.

Ijlal Syed Bushera, 43, said the protest movement would win eventually. “Even if more are killed and they drive trucks over us we be here until we achieve the goals of the revolution,” Bushera told the Guardian.

After two hours, police moved in, firing teargas and charging with vehicles to disperse the unarmed protestors who ran down side streets, coughing and streaming tears.

Activists admit the crackdown and holidays during the Muslim holy month of Ramadan have made it harder to organise large protests, but also say they have switched tactics away from mass rallies to focus on smaller, localised demonstrations.

Observers say the unrest that eventually ousted Bashir after 30 years in power started with small but repeated protests but grew as the economy plunged in the last months of the Islamist autocrat’s rule.

The military seizure of power in October prompted international donors, including the US and the World Bank, to pause significant amounts of economic assistance and debt relief to Sudan. Economic chaos threatens, with millions of people already facing a severe shortage of food and inflation soaring.

Earlier this week, the US government warned American businesses and individuals against dealing with businesses owned by the Sudanese state or controlled by the military.

The new advice “shows the costs of the Sudanese military failing to cede power to a credible, civilian-led transitional government”, US officials said.

The recent crackdown has been condemned by international and regional powers. The African Union and the United Nations mission in Sudan appealed to authorities “to stop the violence, release all detainees, including members and leaders of the resistance committees, stop all arrests … lift the state of emergency and [conduct] credible investigations … into all violent incidents”.

The governor of Khartoum state, Ahmed Othman Hamza, praised the role of security forces in maintaining security and stability. 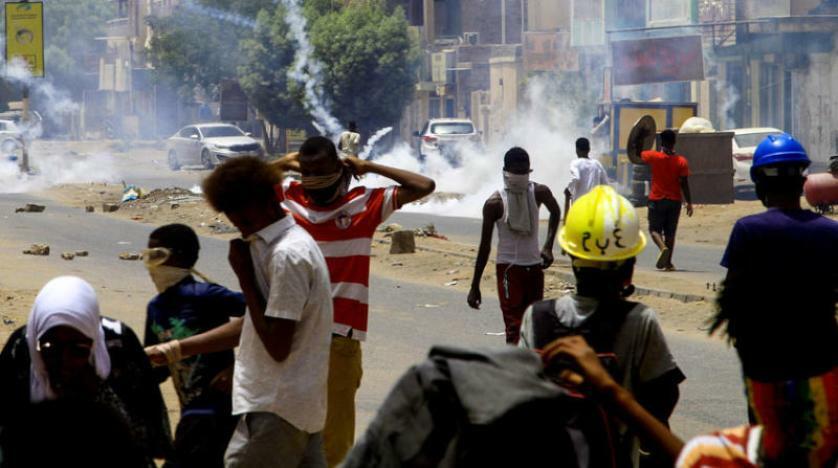 The Independent UK
One Killed, Dozens Wounded in Sudan Protests