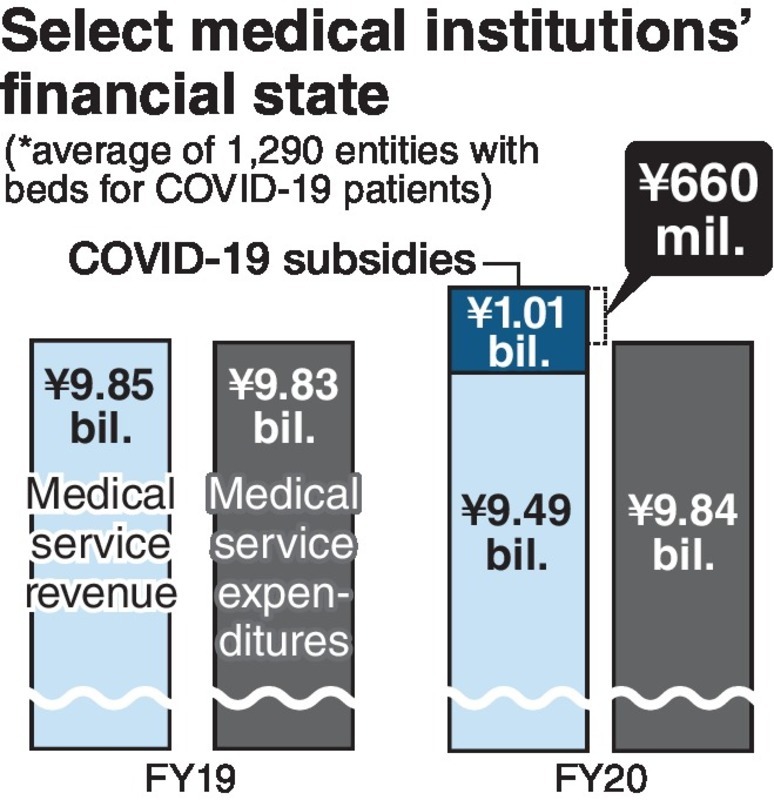 Coronavirus-related subsidies led to an average profit of 660 million yen in fiscal 2020 for medical institutions that secured beds for COVID-19 patients, according to data compiled by the health ministry.

The central government paid subsidies to medical institutions that secured the beds in line with requests from prefectural governments.

The financial data was obtained by the Health, Labor and Welfare Ministry through surveys sent to 1,715 hospitals that received the subsidies, with 1,290 of them responding.

The report was delivered to a subcommittee of the Finance Ministry's Fiscal System Council on Monday.

Looking at 140 state-run hospitals, 94 of them accept COVID-19 patients. These institutions received an average of 1.01 billion yen in subsidies and their final financial balance on average was 640 million yen in the black, compared to just 10 million yen in fiscal 2019.

Among all hospitals that have received the subsidies, there have been cases where it was difficult for them to accept COVID-19 patients due to reasons such as a shortage of nurses or difficulty in ensuring patient flow.

A Finance Ministry official said. "Each medical institution has its respective situation, thus we cannot immediately say there are problems. It is necessary, however, to examine the cost-effectiveness of the subsidies."

Concerns over the shortage of hospitals beds have been easing because the number of newly confirmed coronavirus cases has been on the decline, but fiscal authorities aim to raise questions over how public subsidies should be provided in preparation for another wave of infections.

Frequently during the pandemic, there are cases nationwide in which there are no hospitals in a given area that will accept COVID-19 patients.

In light of this fact, the possibility remains that providing fixed subsidies per bed has not resulted in the expected effect of securing a sufficient number of hospitals where COVID-19 patients can be admitted.

If the report indicates that subsidies to hospitals that accept COVID-19 patients was sufficient in terms of monetary amount, why has the effect been less than sufficient?

Isn't it necessary to examine the issue by precisely checking details such as the size of hospitals, the management entities and the local situations?

There are many hospitals that are concerned about the difficulty in having on hand doctors and nurses who can handle COVID-19 cases, even if they want to accept patients.

What kind of policies are effective for securing hospital beds that can actually help to admit more patients?

To prepare for the next possible spread of the infection, more effective measures must be considered.