Strong winds bring down trees, powerlines, across the South Island 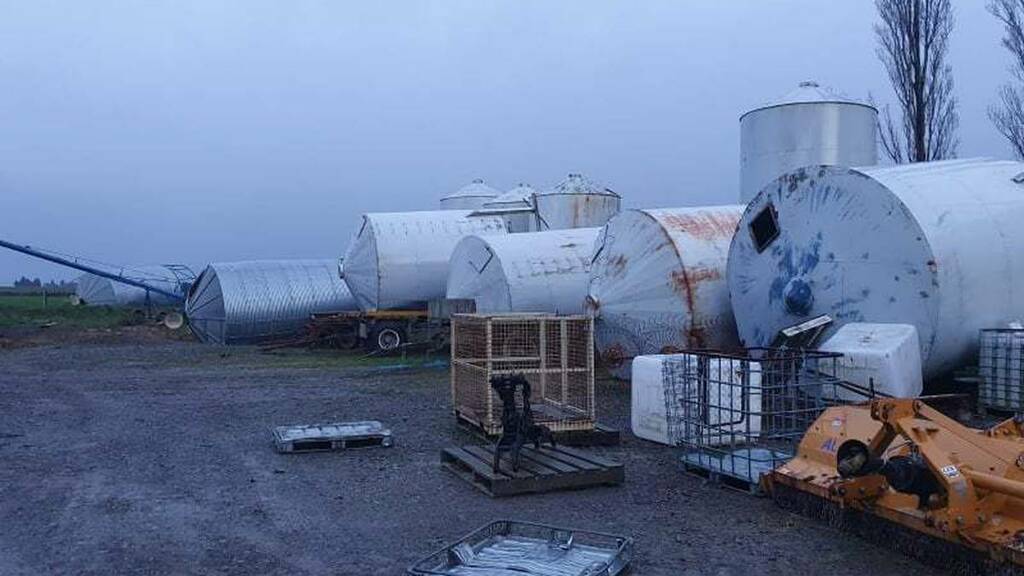 Firefighters in the South Island have been battling numerous blazes overnight as strong winds have moved up the country.

Most of them are due to trees coming down over powerlines or previous burnoffs flaring up in strong winds, Southern fire shift manager Andrew Norris said.

With the winds batting, it is now safe for linemen to get their ladders out and venture power poles to restore power to customers.

The force of the winds

Winds gusting as high as 149 kilometers per hour were recorded in North Canterbury.

The wind power was so strong it snapped a power pole near Oxford bringing down powerlines.

Trampolines were also an easy target, lifted and tossed into trees caught by the strong winds.

Thousands of homes and businesses are without power across Canterbury as the winds batter the region.

Orion has restored power to 1100 properties in Mid Canterbury but there are still around 1600 homes are currently without electricity around Canterbury and Christchurch, while at 9.30 am MainPower said around 7000 are without power throughout the Waimakariri and Hurunui regions.

Canterbury locals on social media report "crazy" winds - with trees down, objects blown around properties, and windows smashed - with the gusts yet to peak.

The damaging winds have brought down trees across roads and paddocks, into farm sheds.

Too dangerous to go outside

"It's devastating," said McCaw. "We have had horrific winds overnight and it has blown down massive big trees - we can't get out of our driveway because there is a big macrocarpa that has blown over and blocked the road.

"The silos have blown over the irrigators, they have been smashed by trees that have fallen down on them."

McCaw said the mess is "massive" and she is worried they will lose power.

"We have dirt in the house that has been blown in from the paddock into the house.

"I am about to clean up the mess before the power goes off because we have got a short that is sparking where the lines have gone down.

"It is still blowing and too dangerous to go outside.

"We can't do much until the wind stops and get out there with the chainsaws and try and clean up the mess basically," said McCaw.

As of 6.30am, Fire and Emergency had around 30 crews responding to about 10 wildfires from South Canterbury to Hurunui, Southern Communications Centre shift manager Kevin Barbara said.

Most were in rural areas. The largest was currently burning in the Glentui area of the Waimakariri District. The only report of fire damage to structures so far was a hayshed.

Fallen trees and debris blocking roads were making it difficult for firefighters to reach some of the fire sites in rural areas.

Some of the fires are at the sites of previous managed burn-offs and had been reignited by the wind. Others may have been caused by fallen power lines, or lightning strikes.

Fire and Emergency had activated its Canterbury regional coordination centre in monitoring mode, in response to the multiple incidents.

Crews would be returning to the sites of some of the Otago fires at first light to check that they were fully out, Barbara said.

There is no power at Loburn School, with power lines down and a fire in the Mt Thomas area, principal Stuart Priddy told parents.

"Without power, we have no water and no operating toilets," he said.

Oxford Area School is also closed today due to high, dangerous winds. The school has no power and buses are not able to run in these conditions.

Orion spokesperson Linda McGregor said there were 19 separate outages at the moment, most of them around Hororata, Darfield and at Sheffield Coalgate areas in mid-Canterbury.

"Crews are out on the road and investigating all the outages," she said. "We hope to get the power back on as soon as possible."

The strong winds were scheduled to abate around 11am at which point most crews could get to work.

"Obviously with very high winds it is not safe for our crews to be up ladders up telephone poles, but there will be some instances we will be able to repair and others we will wait until the wind abates."

Around 3.30am police said there were multiple sites on SH1 and SH79 where trees had fallen in high winds and partly blocked roads.

NZTA Waka Kotahi said a strong wind warning was in place on SH79 between Fairlie and Geraldine and drivers should take extra care, especially if in a high-sided vehicle or motorbike.

There were reports of "quite a bit of debris from trees, rubbish bins and the like blown across road", NZTA said. "We urge caution for those commuting into the city this morning."

A truck driver told RNZ he made it through Arthur's Pass to the West Coast on SH73 overnight, and had seen "the big green highway signs snapped off at ground level".

At one point he said a gust of wind had blown his eight-wheeler into the other lane.

Wild weather continues up the country

Strong wind warnings were in place overnight for the lower South Island and the weather is set to continue up the country this morning.

"Damaging gales" in the Canterbury high country are due to continue till 11am with gusts up to 140km/h, according to MetService. Strong gales are also expected around Christchurch.

Marlborough can expect severe gales with gusts up to 120km/h until 5pm, while there's a strong wind watch in Nelson and surrounding areas.

The bottom of the North Island is also in the firing line, with Wairarapa including the Tararua district due for severe northwest gales through till 9pm tonight. Gusts could reach 130km/h in exposed places and could bring down trees and power lines, MetService warned.

A strong wind watch is also in place for Taihape until 10pm.

Despite the winds, Christchurch Airport remains open, a spokeswoman said. It's not been as bad as feared at the airport so far. "We're having some gusts from time to time but not nearly what was forecast."

Fire and Emergency's Norris said there had been a "significant weather event" that started with very strong wind around Dunedin on Thursday evening.

It had caused problems with a fire on Three Mile Hill and started a vegetation fire on Cape Saunders Rd above Portobello.

Crews from Dunedin City and Wakari Rural Fire had got those fires under control by about 2am, after the wind died down and rain arrived - but it was just the start.

The weather moved north and crews from Fairlie, Albury, Geraldine, Timaru, Pleasant Point and Cave attended "a multitude of fires" including a hayshed near Fairlie and a plantation along the State Highway near Albury.

"At...the plantation the winds were so strong that the crews were unable to actually do anything that was effective. They basically let the fire burn through underneath the plantation, just protecting a nearby house," Norris said.

There had been fires around Waimate, Temuka, Timaru, St Andrews, Methven and Ashburton. They were moving progressively up the island and this morning were around Springfield and Sheffield, Norris said.

"All of the incidents that we've had have been hampered by very strong winds. Trees that are falling over the road are hampering the ability of crews to respond and also bringing down power lines."

"We've got trees down all over the place and they'll be working well into the day clearing those."