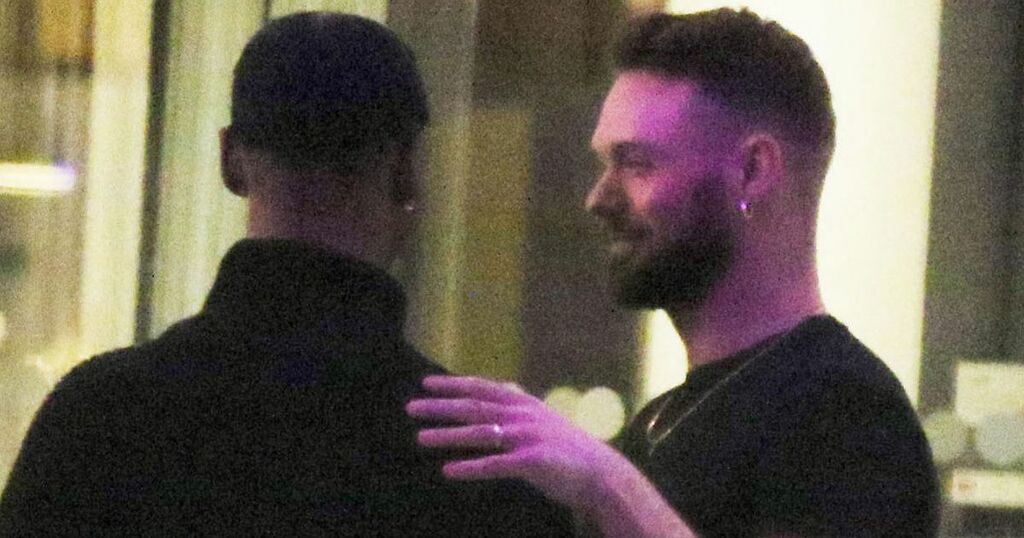 John Whaite and Johannes Radebe looked absolutely thrilled to be reunited at a London hotel as they prepare to go deep into rehearsals for the upcoming Strictly Come Dancing Live Tour.

The 32-year-old former Bake Off star and the 34-year-old dance professional became firm friends while competing on Strictly last year – making it all the way to the live final and just missing out on the Glitterball Trophy to ultimate winners Rose Ayling-Ellis and Giovanni Pernice.

John has been teasing the fact that he was soon to be reunited with Johannes – and now the boys are back together and getting ready to toss each other into the air.

Arriving at a London hotel on Monday, John and Johannes were beaming as they reconnected following the festive break.

Both were wearing black tops – with John sporting a simple T-shirt despite the chilly January winter air as they caught up together.

The friend affectionately embraced while outside the hotel – and it sounds like they are getting straight back to working up a sweat ahead of taking to the stage for the Strictly Tour which is due to kick off in little over one week’s time.

On Sunday, John shared his excitement at being reunited with Johnannes, sharing a throwback photo of them rehearsing together.

"Sadly we won’t be dancing our Argentine tango on the tour, but we’ve got our Paso Doble and Showdance to look forward to. Who’s coming to watch?"

The star later teased that he will be throwing Johannes in the air in an effort to wow crowds at the upcoming live shows.

Posing in a lift, and showcasing his muscular arms and legs, John wrote in a post shared via Instagram Stories: “Time to prepare myself to lift Jotato up again.”

Making a light reference to the time he dropped Johannes during one of Strictly’s live Saturday nigh shows, John added: “I’ll try not to hurl him to the ground this time around.”

John and Johannes wowed fans of Strictly during the 2021 season – which saw the boys, who both have respective partners, develop a deep friendship with each other.

Following the conclusion of their time on the show together, Johannes said he could no longer remember life before he had met and worked with John.

Sharing a clip of them online, the South African dancer declared: "SOME PEOPLE ARRIVE AND MAKE SUCH A BEAUTIFUL IMPACT ON YOUR LIFE, YOU CAN BARELY REMEMBER WHAT LIFE WAS LIKE WITHOUT THEM.

"I managed to watch the finale of strictly with my family and friends back home in South Africa, it was lit!

"@john_whaite they are desperate to meet you hun'. The pride reflected on their faces for everything we've accomplished is heart-warming."

He continued: "@bbcstrictly delivers an awesome show every year but this season has been nothing short of revolutionary and to EVERYONE involved THANK YOU from the bottom of my heart.

"The aim has always been to inspire...Representation of any minority group in media acknowledges their existence in the real world, influencing societies openness and understanding of others which makes for a better world for all.

"Thanks to everyone who tuned in every weekend, supporting and cheering for great Saturday entertainment aimed at bringing audiences some sparkle, joy and escapism.”

Indeed, fans will be able to see a lot more of Johannes in 2022 if they so wish.

As well as featuring as part of the cast of the Strictly Tour – which will take in dates up and down the UK beginning on January 20 until February 13 – the dancer is also touring the country with his own solo dance show.

His show, which is titled Johannes Radebe: Freedom, will kick off in April and last until the end of March with fans treated to an explosion of movement featuring African, Latin and classic dance arrangements.