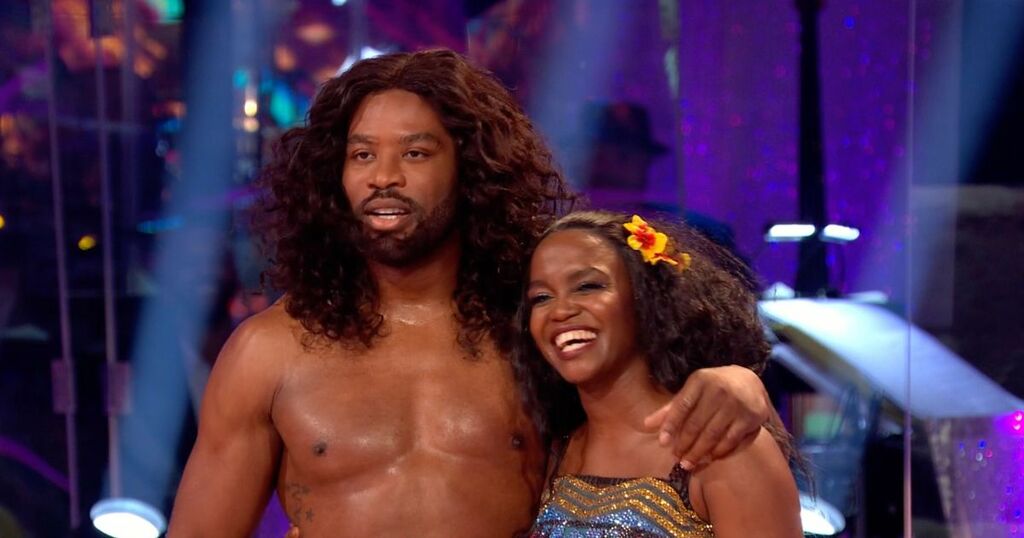 The former rugby player showed off his ripped body in tonight's performance to You're Welcome by Dwayne Johnson, from the Disney movie Moana.

Ugo was wearing just a leaf-style skirt and a wig as he moved his way around the dance floor with Oti.

The sportsman had viewers' hearts racing as they saw the hunk dance on their screens.

Another cheekily penned: "I think Ugo Monye's left pectoral muscle is worth a couple of points on its own!"

And a third added: "I'd happily wait in a tree for Ugo to swing in and rescue me."

Ugo is all smiles on the dance floor when he showcases his best moves with Oti.

But the rugby legend has recently suffered from immense heartache having got divorced and losing his beloved father in the space of just months.

After his first ever live performance, a Samba to Iko Iko (My Bestie) by Justin Wellington ft Small Jam, Ugo explained he had actually been at his father's funeral earlier that day.

Because of this, the brave sportsman dedicated the dance to his dad, Theophilus, who died from prostate cancer aged 81.

"My dad passed away a couple of weeks ago, prostate cancer, and this morning we had the funeral," he told host Claudia Winkleman.

"And during the funeral, we spoke about today being a day of celebration and that’s exactly how today felt.

"There’s no better way to celebrate than through dancing and so today feels really special."

Ugo has two daughters, Phoenix, four, and Ruby, one, who he credits with inspiring his decision to do the show.

"My two beautiful daughters never had a chance to see me on the rugby pitch," he explained in a statement.

"So, to know they can watch me waltzing and twirling every week is really special to me.

"I love an outfit at the best of times, so bring on the sequins," he added.