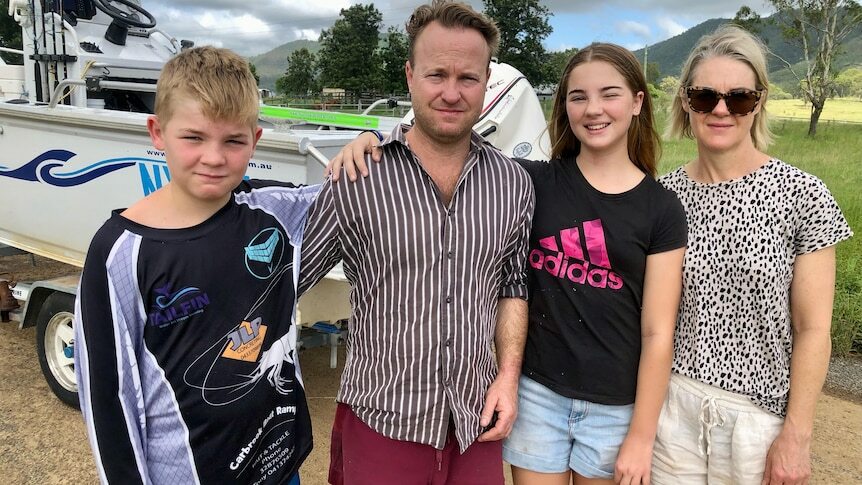 Remarkable stories of survival continue to emerge from flood-ravaged areas around Gympie, north of the Sunshine Coast, that have received almost a metre of rain in recent days.

A Brisbane family of four say they and five others escaped raging floodwaters at Woolooga, north-west of Gympie, by tying their tinny to a power pole in the middle of the night.

Troy Schumacher's four-wheel drive became submerged around 1am Saturday on Brooweena Woolooga Road despite being told by locals they were safe on high ground.

The Schumachers had been making their way to Gladstone when they became cut off along with two other families in separate vehicles.

"We parked up at the highest ground. Locals said, 'Go there, this is your best spot, you can't get out of here'," Mr Schumacher said.

'It's too dangerous, we can't get you'

The family spent hours watching water rise around them until a young family in a car beside them knocked on their window.

"The family next to us were in a low-lying car; they knocked on our windows about 1am and said: 'Have you got any spare seats? Can we get the boat floating?'" Mr Schumacher said.

He said they managed to fit themselves and five others in the boat and rode out the wild weather.

"And we just sat there in driving rain with a bilge pump on all night."

The group called emergency services who deemed the situation too hazardous for a rescue.

"The firies tried to get us, they called us on the phone and said, 'Nup, it's too dangerous, it's too rough, we can't get you'," Mr Schumacher said.

Chris Stanford was on her way into Woolooga to look for a lost dog when she came across the tinny loaded up with the stranded families.

"As I came down the hill there was a boat coming towards me, and as I came closer I realised it was nine people in the boat and four kids," she said.

"The kids were terrified, so I said, 'Well, quick, you better hop in and I'll take you up home'."

The three families have spent the past two nights with the Stanfords, who were more than happy to provide accommodation and food.

"They've been with us for two nights having a great time," Ms Stanford said.

Mr Schumacher said the Stanfords' hospitality had made a difficult situation much easier for the families.

"Yeah, the Australian way, that's what came through for us," he said.

"I think the family are a bit scarred but we're lucky.

Ash Davis, Acting Sergeant officer in charge from Kilkivan Police Station, said she expected more calls for help once a phone outage in the region had been resolved.

She said roads had been badly affected and a bridge at Running Creek, Woolooga had been washed away.

"I still have people stranded on properties that I'm trying to get to, the roads are still washed away and that sort of thing.

"It's been a multi-agency operation between the SES, QFES and ourselves."