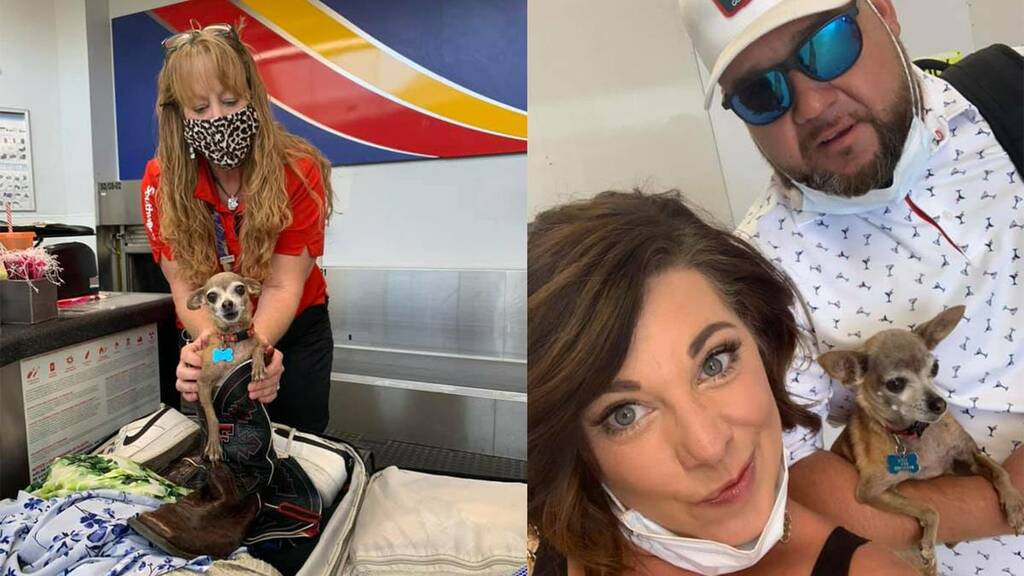 A couple from Texas have told Southwestern airlines they have had no idea how their pet chihuahua got into their suitcase.

The dog was discovered in luggage at Lubbock Airport in Texas bound for Las Vegas on 26 September, after the suitcase was found to be almost 3kg overweight.

The extra weight belonged to Icky, a pet chihuahua, which was found folded into one of owner Jared Owens's cowboy boots.

The photo of the dog being pulled out of a shoe was shared to Facebook by Jared and Kristi Owens, who claimed to have no have no idea how the animal got in there.

"You know it's going to be an epic trip to Vegas when you get to the airport to check your bags….6lbs over weight, and out pops a chihuahua from your boot," he wrote.

The couple blamed the stow away chihuahua on a last-minute pack. They had been running late when they dropped off their two other dogs and children, 4 and 8, with their grandparents. They had lost track of Icky.

"I guess this little burrower just burrowed down in the bottom of it and we never had any clue," Jared told Insider.

"She didn't make a peep, not one sound," said Kristi. "We had no clue and as soon as we unzipped it, she just came crawling right out."

The owners thanked the Southwestern employee Cathy Cook who made the discovery for being so understanding.

"She offered to watch Icky until we got back," said Jared.

Cook said this was a first in her 25 years of working with the airline. Rather than sending the Owens home, she offered to dog-sit Icky, allowing them to catch their flight.

"I always will have the best story to tell about overweight bags," she said.

Fortunately the Owens were able make their flight and family members picked up Icky from the airport shortly afterwards.

A representative for the airline confirmed the story to local media.

"We thank our employee for showing the hospitality that Southwest is known for to everyone — even our four-legged friends!"

Southwestern airlines does allow pets to travel in cabin, for a fee, rather than smuggling dogs in cargo. However the rest of the Owens' travel plans did not have room for Icky, so she had to be left behind.

Some airlines specifically ban Chihuahuas and other snub nose dogs from travelling, due to the potential breathing difficulties in and cannot be taken as cargo.

Carriers including Air New Zealand will not carry Brachycephalic dog breeds on longer routes saying air travel can be "an increased risk for brachycephalic breeds."