Stop Forcing Cowboys-Giants Games on Us on TV 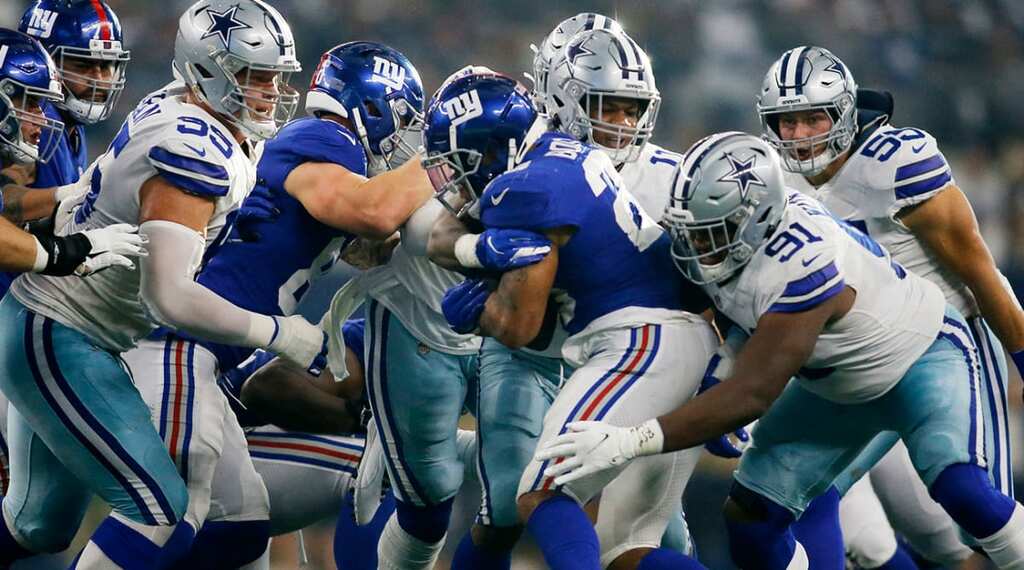 Even before the Giants-Cowboys game became a Mike Glennon résumé-builder—arguably one of the worst kinds of games—the sheer hubris of a broadcast network’s using the “America’s Game of the Week” moniker to promote these two teams with the contemporary appeal of a M*A*S*H rerun felt a little overwrought.

Putting a tilt between two gigantic markets in a prime spot, which Fox at 4:25 p.m. ET is, is likely television making 101, but how often do we—and should we—force ourselves to consider what America’s Game of the Week really is, and which teams are actually deserving of that centerpiece in our homes each week? Assuming that fans with access to local-only channels would absolutely want to watch Cowboys vs. Giants is a lot like assuming they are lost in time and still vaguely believe that Bill Parcells and Troy Aikman are milling about in pads and a headset. And while that might be true of a certain brand of fan, it also holds up the disconnect between where the NFL is now and where it should be headed.

Looking at a broadcast map of the late-window slate, almost the entirety of the U.S. was subjected to this game, while a sliver of the West Coast and some blessed towns in North Dakota, northern Idaho and northern Minnesota were allowed to watch possible MVP frontrunner Kyler Murray take on Trey Lance, the No. 2 pick in the draft, in a matchup between two teams that compete in the best division in football. While the network choosing between these two games did not have access to Browns-Chargers or Bears-Raiders, it simply added to the irony that all of these budding young stars were probably going unnoticed at the expense of a Jason Garret–led offense sitting over an otherwise enjoyable Sunday like a damp grey cloud.

Making us watch Cowboys-Giants is making believe that the players (and most fans for that matter) still believe in these prewarmed rivalries that have almost nothing to do with the current state of play. Those cosmopolitan city slickers against the scruffy, cattle herders down south. It reinforces these old fedora-hat-in-the-press-box tropes that are simply tired and worn out. This was, arguably, one of the least relevant games of the week and, outside of the enjoyment many of us derive from watching Dak Prescott on each drop back, offered nothing in the way of enjoyable, aesthetic football. Do we think that the Cowboys and Giants actually hate each other now? Do we think they read all the nasty stuff they’re sayin’ in the papers and get extra motivated to give it their best?

Come, kids. Let’s gather around the Admiral and watch these two coaches try to compete in a silent battle to log more punts.

I suppose the argument we’ll get in return is that a modern football fan with a more diverse range of football-related interests (perhaps influenced by the fantasy football and daily sports betting scenes) is better able to access out-of-market games through different apps, multiple Red Zone channels or a bar with NFL Sunday Ticket. Many of the people who were truly forced to sit through this game at home are probably those who have trudged along with their local team for decades and have considerably less interest in matters outside of that.

But if those fans cheer on one of the 24 teams playing at other times in Week 5, wouldn’t you want to expose them to something better? Cardinals-49ers wasn’t a white-knuckle adventure ride, but it featured the lone undefeated team in the NFL and the league’s most efficient and accurate passing attack. It featured the most complex offensive scheme in the NFL, one that has been unsuccessfully copied by almost half the franchises in the league, being run by an explosive, raw and extraordinarily gifted passer who came from relative obscurity (one full season at North Dakota State) to upend the 2021 draft.

Maybe when more fans get a taste of what is happening instead of what is familiar, they’ll stop complaining about how the NFL is unwatchable, or nebulously too soft or poorly officiated.

Cowboys-Giants was once a game that carried with it a certain level of gravitas, just like Lehigh vs. Lafayette or North Carolina vs. Wake Forest. It was based on a reality that simply doesn’t exist anymore, and while it’s nice to revisit that time once in a while and feel the way we used to feel, it doesn’t represent the larger national interest. Continuing to shoehorn these teams into choice TV windows at literally every opportunity to do so is simply forcing people to reduce a game to background noise instead of making a better game the showpiece it deserves to be.