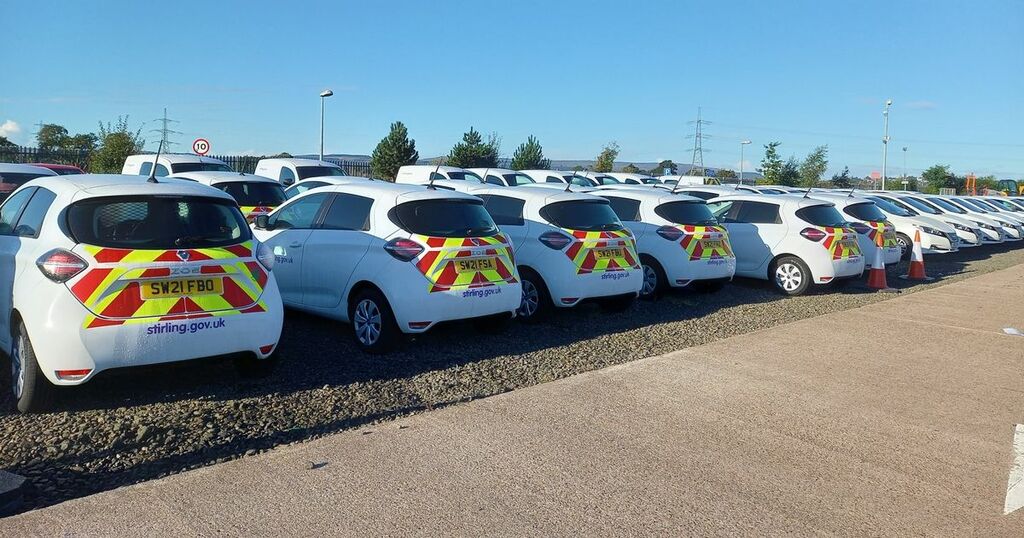 Delays in the deployment of brand new Stirling Council electric vehicles worth more than £1 million have been put down to coronavirus restrictions.

For the last few months around 60 electric cars – which include Nissan Leaf and Renault Zoe models – have been sitting at a car park at the local authority’s Lower Polmaise Waste Management Centre near Fallin. Each car’s retail price is around £30,000.

Stirling Council this week pointed to coronavirus restrictions causing hold-ups in utility companies commissioning charger installations as well as a general decline in vehicle use during the pandemic.

A Stirling member of the public had contacted the Observer last week to highlight that the vehicles had been sitting at Polmaise for a number of months.

It followed the revelation that South Lanarkshire Council’s fleet of electric vehicles had hardly moved since that local authority had taken delivery of 141 Renault Zoe vehicless in September last year.

The resident, who spotted the Stirling vehicles, said: “These cars have been sitting there for about two months not doing anything. There must be more than 50 of them parked there.

“You’d think the council would want to get them on the road as quickly as possible – for climate crisis reasons obviously, but also in the current circumstances when it can be difficult to get petrol and diesel.

“They could be charged up and existing petrol and diesel vehicles taken off the road.”

“Grant funding of £990,000 was secured to procure this order of vehicles to replace existing diesel and petrol vehicles in line with our ambitions for all council vehicles to be operated from renewable sources.

“Covid restrictions caused delays with utility companies commissioning charger installations, and also saw a dramatic reduction in vehicle use across the council’s fleet in general.

“However, work is ongoing at some of our main sites to complete charger installation by November, and some of these electric vehicles are already in use on our Additional Support Needs transport routes, where electric people carriers have replaced diesel equivalents.”

Stirling Council Conservative group leader Councillor Neil Benny said: “However good the reason for buying these vehicles, this is still £1m of taxpayers money that has been spent on cars that have sat in a compound for months.

“That’s not good enough and the SNP administration at the council should have ensured there was a plan for sufficient charging points to get these vehicles in use asap.”

Green councillor for Dunblane and Bridge of Allan Alasdair Tollemache said: “It is really good to see the ambition of the council to expand its electric vehicle fleet and the work that has been done to increase the charging capacity in the Stirling area.

“Leading the way in sustainable transport is vital if carbon reduction targets are going to be achieved.”

The Stirling Council spokesman said this week that as of July there were 161 free public charging bays in the district with a further 58 to be installed later this year.

Earlier this year vandals had caused approximately £5000 worth of damage to chargers at the council’s flagship EV charging hub at Castleview Park and Ride where there are 64 charging points.