The Guardian - US
Sport

Steve Kerr: the moral compass at the heart of the Golden State Warriors

Basketball was the furthest thing from Golden State Warriors coach Steve Kerr’s mind before his team’s playoff game against the Dallas Mavericks on Tuesday night.

Hours earlier 21 people, including 19 children, had been killed in a school shooting in Uvalde, Texas. It followed shortly after a self-described white supremacist terrorist was charged with killing 10 people at a supermarket in Buffalo. Kerr, his hands and voice shaking, wavered between anger and devastation as he refused to speak about basketball and instead highlighted the political dysfunction that has helped such slaughter become all too common in the United States.

“There’s 50 senators right now who refuse to vote on HR8, which is a background check rule [for gun purchases] that the House passed a couple years ago. It’s been sitting [in the Senate] for two years,” Kerr said. “There’s a reason they won’t vote on it: to hold onto power.”

By the end of the press conference, Kerr was too angry to continue. “It’s pathetic. I’ve had enough,” he said and walked out the room.

Kerr, along with figures such as his mentor, Gregg Popovich, and star players LeBron James and Chris Paul, is one of the moral centers of the NBA. It’s no surprise that gun violence is such an emotive topic for Kerr. His father was shot dead in Beirut in 1984. Kerr was playing college basketball in Arizona at the time, and the incident has defined much of his life.

“There are a few issues that I am particularly passionate about, one being gun control,” he told me when I spoke to him for my book We Matter: Athletes and Activism. “My father was murdered, so gun control is always something that I am very passionate about, and that was really the first issue that I brought up with the media years ago.”

According to CNN, the 18-year-old gunman in the Texas shooting had legally purchased two assault rifles and ammunition for his birthday in the days before the massacre. The gunman accused of the murders in Buffalo is also 18 and had also legally bought assault rifles, one of which he is alleged to have used in the killings. Why any teenager needs – or is allowed – to own an assault rifle is beyond belief. Politicians, as usually, offered empty words after the Texas shooting. Republican Tony Gonzales, who represents Texas’ 23rd Congressional District, which includes Uvalde, tweeted a message in which he said: “I know the people of Uvalde. I love them. There are absolutely no words to describe the pain our community is carrying right now.” This is the same politician who in March 2021 tweeted that: “I am a proud supporter of the 2nd Amendment and will do everything I can to oppose gun grabs from the far Left”.

All of this speaks directly to the heart of Kerr’s frustration and why he was livid at his press conference on Tuesday.

“I’m so tired of getting up here and offering condolences to the devastated families that are out there. I’m so tired,” Kerr said. “Excuse me. I’m sorry. I’m tired of the moments of silence. Enough.”

The Warriors ended up losing the game to the Mavericks 119-109, but Kerr’s bravery was not lost on the Warriors players. Golden State’s star guard Stephen Curry retweeted his coach’s entire pre-game press conference, along with the caption: “Watch this as much as you watch the game tonight.”

Curry followed up that tweet with further praise for Kerr. “I appreciate his leadership. It’s on everybody’s mind coming into the game,” Curry said. “It’s kinda hard to stay focused on playing basketball. It happened in this state. I got kids, take them to school every day, drop them off.”

His teammate Damion Lee agreed after the game. “It’s just sad. You saw Steve’s pregame presser. Those are my exact same sentiments,” Lee said. “It’s sad the world we live in. We need to reform that. It’s easier to get a gun than baby formula. It’s unbelievable.”

As a former player I can attest to the fact that trust and respect are crucial to the relationship between player and coach. During my interview with Coach Kerr in my book, he explained how he gives players the freedom to be who they are and discussed with me topics his team are passionate about.

He supported his players when they refused to visit the White House while Donald Trump was in office, and backed them when they spoke out about racism and police brutality. Indeed, Kerr himself has had his own battles with Trump and attacked the former president’s proposed ban on refugees and travelers from some Muslim-majority countries in 2017.

“I would just say that as someone whose family member was a victim of terrorism, having lost my father, if we’re trying to combat terrorism by banishing people from coming to this country, by really going against the principles of what our country is about and creating fear, it’s the wrong way of going about it,” said Kerr at the time.

He told me how that desire to listen to players is reciprocated when he is passionate about something like gun control. He told me the Warriors have team discussions, share opinions, learn from each other, and how that benefits them as a team. In that sense, Kerr is treating his team like a second family. “International issues and societal issues and political views were discussed at the dinner table [when Kerr was growing up],” Warriors assistant coach Bruce Fraser told the Guardian in 2018.

Players and coaches supporting each other as they speak out on topics they value is important as they seek to make positive changes in society. And the bond that support creates doesn’t harm their day jobs either: the Warriors are just one win away from the NBA finals and a shot at the fourth championship of Kerr’s reign at Golden State. 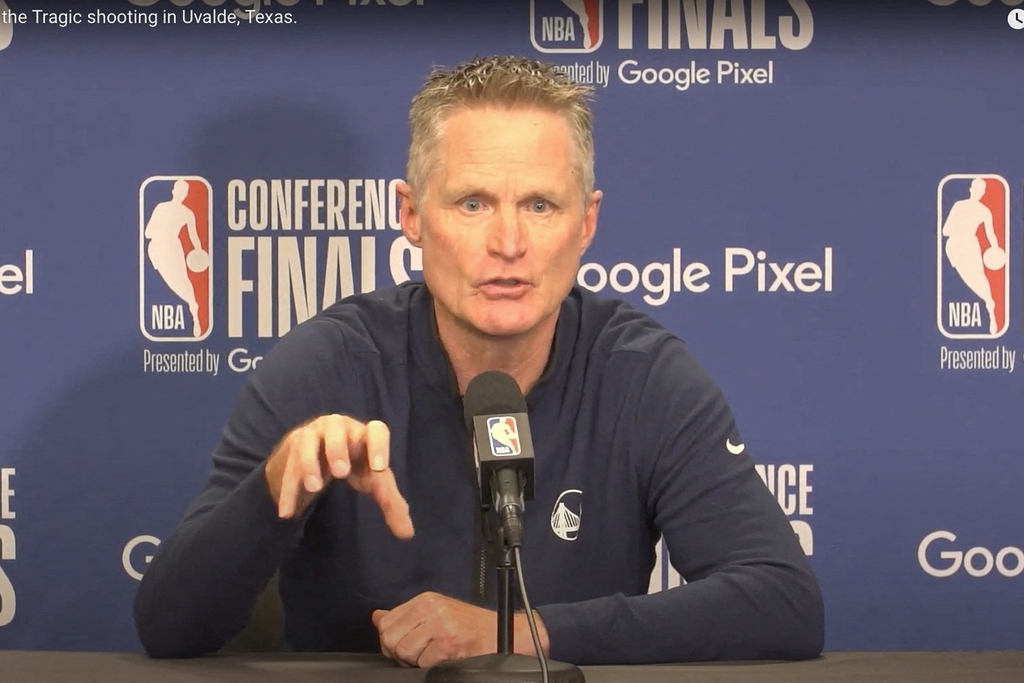 Steve Kerr appealed to U.S. lawmakers prior to the Golden State Warriors' NBA play-off against the Dallas Mavericks following a…