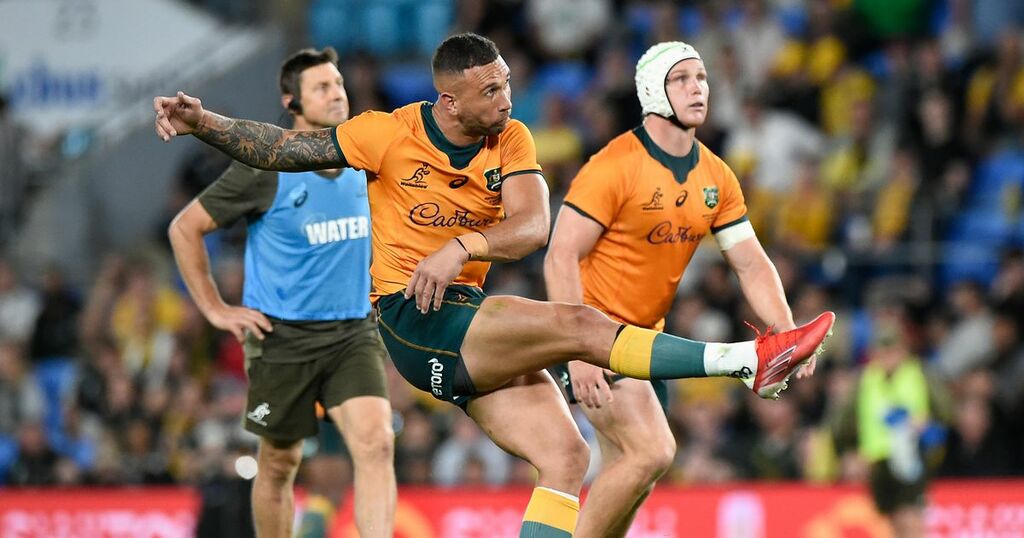 It was anything but a straight path for Quade Cooper en route to ending his Australia exile in sensational circumstances on Sunday, four years on from his previous international appearance.

The 33-year-old kicked 23 points for the Wallabies as they beat world champions South Africa 28-26, which included a game-deciding penalty with the last kick of the game.

Australia has rallied around its recalled star in the wake of that result, which came some 13 years after he first exploded onto the international scene and earned his Wallabies debut.

Cooper has in the past held something of a divisive reputation and was previously banned from the Australia setup when Robbie Deans coached the team in 2012.

But former New Zealand boss Steve Hansen backed the veteran to stay on and told Fox Sports he felt Cooper has “turned into a lovely young man” despite his struggles.

“There is no doubt he is a good thing,” said the 2015 Rugby World Cup-winning coach after Sunday’s result.

“He’s always been a major talent Quade, but he has probably got in his own way and I think with maturity and age he’s turned into a lovely young man.

“The way he spoke [after the match] was impressive.”

Dave Rennie is the incumbent at Australia’s helm who has benefited from Cooper’s comeback, throwing the 71-cap star into his XV at the expense of Brumbies prospect Noah Lolesio.

It’s not uncommon for coaches to assume a form of paternal role with many of their players, and Hansen gives the impression of one who revels in seeing stars of the sport develop.

New Zealand-born Cooper might have been a Wallabies centurion by now were it not for his four years of non-selection, but Hansen went on to suggest he’s a better player (and person) for it.

“He’s become totally a team man, he understands his own identity, which I think is massive, a lot of times our young players, and older ones for that matter, come into the game and all they’ve got is rugby and when the rugby doesn’t go well then they struggle,” the former All Blacks boss added.

“He understands his identity not just as a rugby player, but as a brother, a friend, and he organises his rugby around those identities as well, and he’s very secure in who he is and you saw that in his performance because better people make better players.

“He came out and he was very confident in what he did, he was self-assured, without being arrogant really about it.

“You could see that he was happy in that environment and when you get a player like that with his talent, they’re hard to stop and wasn’t it wonderful to see the fairytale at the end.”

And rightly so considering the elder statesman had successfully slotted seven kicks from seven attempts up to that point, maintaining a frosty demeanour throughout.

That contribution will see Cooper earn his Australian citizenship at the fifth attempt, with the government changing its eligibility criteria in the wake of Sunday’s result.

Cooper has played the last few seasons of rugby for Hanazono Kintetsu Liners in Japan, having previously represented the Queensland Reds and Melbourne Rebels on Sunday.

He looks set to keep Australia’s No. 10 jersey for another clash with South Africa on Saturday, hoping for a happy homecoming at Suncorp Stadium, where he once dazzled with the Reds.