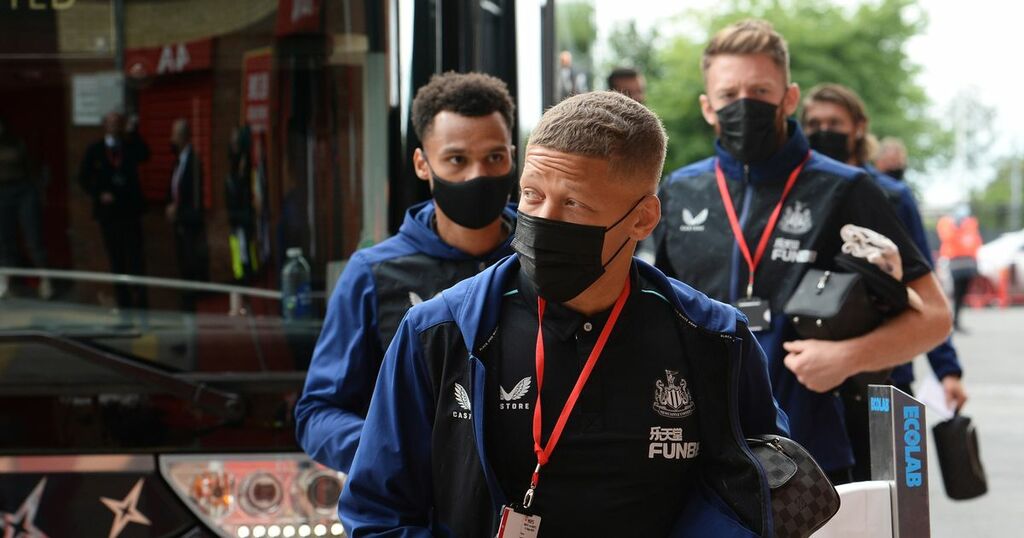 In the end it proved to be a car crash waiting to happen.

It was akin to Steve Bruce trying to be like Moses and part the Red Sea only to be drowned in a torrent of goals.

We all had a sense of inevitability about the Theatre of Nightmares and so it came to pass.

From a bright start of defiance all went downhill - Cristiano Ronaldo as he was surely destined to do twice shot Manchester United ahead to break Geordie hearts and long before a humiliating scoreline was completed chants of "we want Brucie out" repeatedly echoed from the away end over an Old Trafford pitch where once the same man had been a local hero.

For it to happen here of all places in front of his mentor Sir Alex Ferguson, another close pal Sam Allardyce, and celebrity fan Declan Donnelly must have cut long and deep.

VOTE FOR YOUR NEWCASTLE MAN OF THE MATCH HERE

Yet it was all inevitable. Ronaldo scored his 786th and 787th goals of an incredible career, Bruno Fernandes weighed in with his usual beauty, and the visiting United leaked four times to make it 12 goals conceded in only four PL matches. Those are shocking, painful figures.

The dilemma at the heart of the back where absolutely no one provides security was highlighted by another desperate gamble. Two out-and-out central defenders, Federico Fernandes and Fabian Schar, were relegated to the pitch side in favour of a midfielder Isaac Hayden yet the skipper Jamaal Lascelles survived after a nightmare start to the season.

I'm sorry but this result is what you get when you spurn a decent early fixture list and fail to sign a defender in the long transfer window of opportunity.

If the taunts of the disillusioned fans coupled with the public dressing down from Mike Ashley proved hard for Bruce to take then things can easily get even worse with Leeds due to visit on Friday night.

Trial by television in front of a restless 40,000-plus crowd ready to jump on any failure threatens to turn SJP into a cauldron. What continues to confuse and frustrate the Toon Army is Bruce's baffling use of his substitutes. With United trailing and searching desperately for a goal he brought on a full-back Jamal Lewis and midfielder Jeff Hendrick while Dwight Gayle once again sat motionless on the subs' bench having failed to play a solitary second in four PL matches which have produced one draw and three defeats.

As Callum Wilson is in danger of also missing the next game is Gayle once again destined to sit out another 90 minutes unused with only the comfort of a new contract to keep him warm? What on earth is he doing here if he cannot get on the pitch under the current dire circumstances!

Bruce's after match quotes are now taking on a repetitively depressing tone as he becomes more and more prickly. An optimistic "plenty of positives" is inevitably followed by "we gave away bad goals. We have to defend better". Only trouble is United never do.

One point collected from 12 on offer, plus the fact that United are already out of the League Cup, piles immeasurable pressure upon all though Ashley obviously cares not a jot. However rebellious fans most certainly do.

Yes Newcastle had for an hour performed admirably against the odds and were level at 1-1 but they simply cannot see out matches these days.

While Ronaldo marked his second coming with two crucial goals he may like to acknowledge the considerable assists of opposing goalkeeper Freddie Woodman.

Maybe the sight of a fit-again Karl Darlow sitting on the subs' bench unnerved a young custodian but he hardly covered himself in anything but embarrassment when twice gifting Ronaldo and Man U the lead. The first was an absolute howler off his shin when the Mags were in sight of the safety of the half-time dressing-room and on the second he was nutmegged.

Ronaldo has changed his game to accommodate age just as Alan Shearer did late in his goal-laden career. He is now a sniffer of chances not a dominator of games but it leaves him just as lethal if not so eye catching.

That is the difference between the two No. 7s on view - Ronaldo scores a mountain of goals while Joelinton, another first starter, most certainly does not.

If CR7 topped up his goals total to 787 for clubs and country Javier Manquillo scored only his second ever PL goal in 122 appearances with a good finish on 55 minutes following fine work by a bright and relentless Miggy Almiron.

Ironically his other came while also residing in the North East on loan at Sunderland during 2016-17.

What now? More soul searching, another shuffle of the pack, another visit to the prayer mat, and the arrival of Leeds United and Bielsa's bucket!

Oh, and after that Newcastle's next five games sees three away with the two at home against Spurs and Chelsea.

Yeah, it is all about as much fun as sticking your finger in a sausage machine!