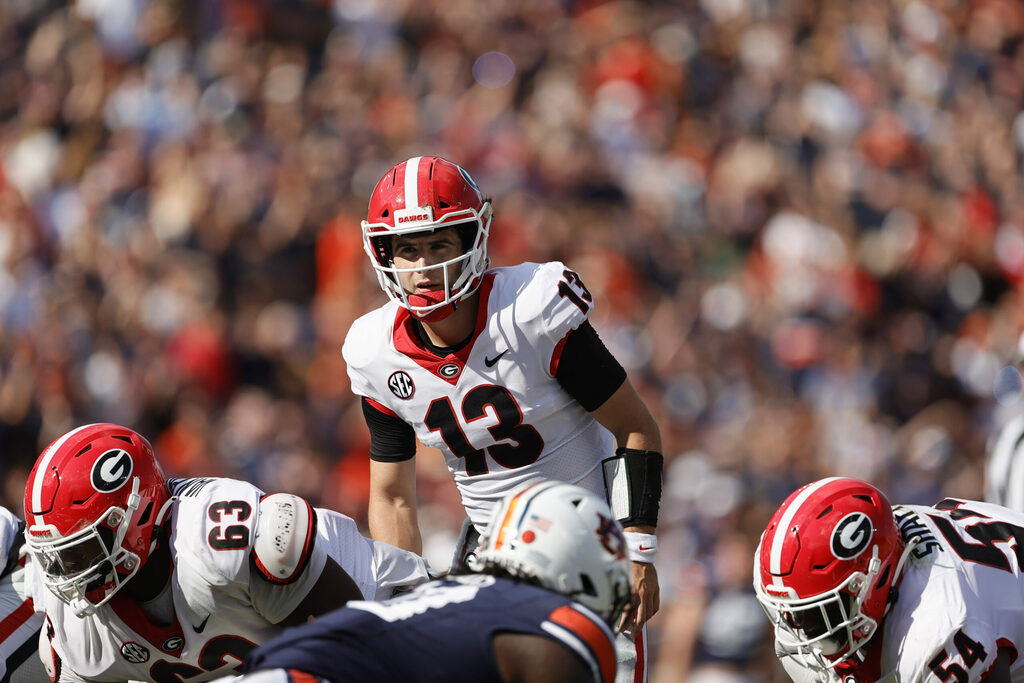 Stetson ‘The Mailman’ Bennett delivered a Georgia win on The Plains Saturday afternoon. The No. 2 Bulldogs move to 6-0 after the 34-10 victory over No. 18 Auburn.

The heralded backup quarterback made his second start as J.T. Daniels recovers from a lat injury. The former walk-on was incredibly efficient in a hostile environment.

Bennett went 14 of 21 for 231 yards and two touchdowns passing, with six attempts for 41 yards on the ground.

Redshirt freshman Ladd McConkey had a breakout game, racking up five catches for 135 yards and this bomb of a touchdown.

Auburn quarterback Bo Nix was able to scramble and make plays downfield on the highly-ranked Georgia defense, but Tiger receivers accounted for seven drops, one of which was in the endzone.

Auburn finished with 272 yards through the air, by far the most UGA has given up this season (110 average), but only 46 on the ground on 29 carries.

The Tigers rush offense was ranked 13th nationally headed into the matchup (238 average).

In contrast, the Bulldogs were able to move the ball especially well on the ground, gaining 201 yards on 49 carries. That’s 4.1 yards per rush for UGA, compared to 1.6 for Auburn.

This pick by the Georgia defense was the first thrown by Nix all year and the only turnover of the game.

Some shots of Nakobe Dean's INT.

It wasn’t all peaches and cream for Georgia, though, Jack Podlesny missed a 43-yard field goal, and more importantly, the injury-riddled Dawgs left with more issues than they had to begin with.

Preseason All-American tackle Jamaree Salyer, safety Christopher Smith, receiver Jermaine Burton and cornerback Ameer Speed all left the game with injuries. Salyer (foot) and Smith (shoulder) looked to be in pain before being helped off the field.

We will have to wait till next week to find out how serious these injuries are, but Georgia does walk out of Jordan-Hare stadium with a decisive win in the Deep South’s Oldest Rivalry.

UGA will face No. 16 Kentucky next Saturday in Athens.