'State, what state?' Lebanese together in solidarity and rage

By Dylan Collins and Maya Gebeily

Beirut (AFP) - In Beirut's beloved bar districts, hundreds of young Lebanese ditched beers for brooms on Wednesday to sweep debris in the absence of a state-sponsored cleanup operation following a deadly blast.

"What state?" scoffed 42-year-old Melissa Fadlallah, a volunteer cleaning up the hard-hit Mar Mikhail district of the Lebanese capital.

The explosion, which hit just a few hundred metres (yards) away at Beirut's port, blew all the windows and doors off Mar Mikhail's pubs, restaurants and apartment homes on Tuesday.

By Wednesday, a spontaneous cleanup operation was underway there, a glimmer of youthful solidarity and hope after a devastating night.

Wearing plastic gloves and a mask, Fadlallah tossed a shard of glass as long as her arm at the door of the state electricity company's administrative building that looms over the district.

"For me, this state is a dump -- and on behalf of yesterday's victims, the dump that killed them is going to stay a dump," she told AFP.

The blast killed more than 110 people, wounded thousands and compounded public anger that erupted in protests last year against a government seen as corrupt and inefficient.

"We're trying to fix this country.We've been trying to fix it for nine months but now we're going to do it our way," said Fadlallah.

"If we had a real state, it would have been in the street since last night cleaning and working.Where are they?"

A few civil defence workers could be seen examining building structures but they were vastly outnumbered by young volunteers flooding the streets to help.

In small groups, they energetically swept up glass beneath blown-out buildings, dragging them into plastic bags.

Others clambered up debris-strewn stairwells to offer their homes to residents who had spent the previous night in the open air.

"We're sending people into the damaged homes of the elderly and handicapped to help them find a home for tonight," said Husam Abu Nasr, a 30-year-old volunteer.

"We don't have a state to take these steps, so we took matters into our own hands," he said.

Towns across the country have offered to host Beirut families with damaged homes and the Maronite Catholic patriarchate announced it would open its monasteries and religious schools to those needing shelter.

Food was quickly taken care of, too: plastic tables loaded with donated water bottles, sandwiches and snacks were set up within hours.

"I think everyone should be here helping, especially young people.No one should be sitting at home -- even a smile is helping right now."

Abdo Amer, who owns window company Curtain Glass, said he was moved to make such an offer after narrowly surviving the blast.

"I had driven by the port just three minutes earlier," the 37-year-old said.

He offered to replace windows for half the price, but said he was fixing some for free given the devastating situation for many families following the Lebanese currency's staggering devaluation in recent months.

"You think the state will take up this work?Actually, let them step down and leave."

Outrage at the government was palpable among volunteers, many of whom blamed government officials for failing to remove explosive materials left at the port for years.

"They're all sitting in their chairs in the AC while people are wearing themselves out in the street," said Mohammad Suyur, 30, as he helped sweep on Wednesday.

"The last thing in the world they care about is this country and the people who live in it."

He said activists were preparing to reignite the protest movement that launched in October.

"We can't bear more than this.This is it.The whole system has got to go," he said. 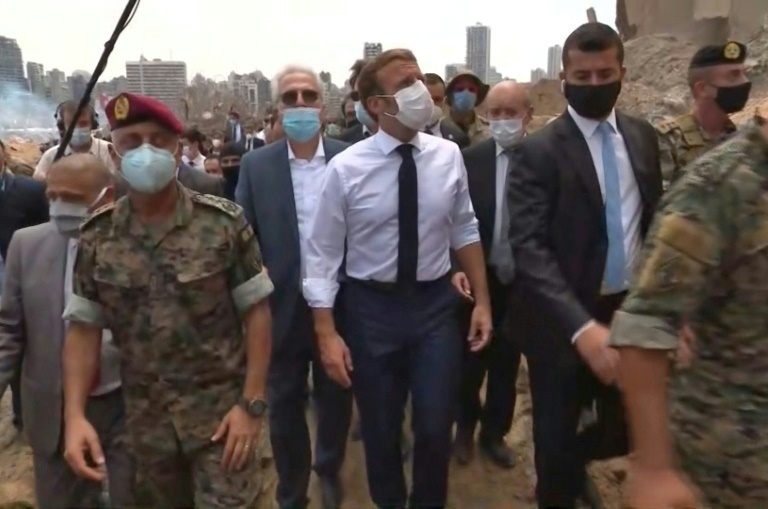 AFP
One subscription that gives you access to news from hundreds of sites
Macron visits traumatised Lebanon to offer help, urge reform