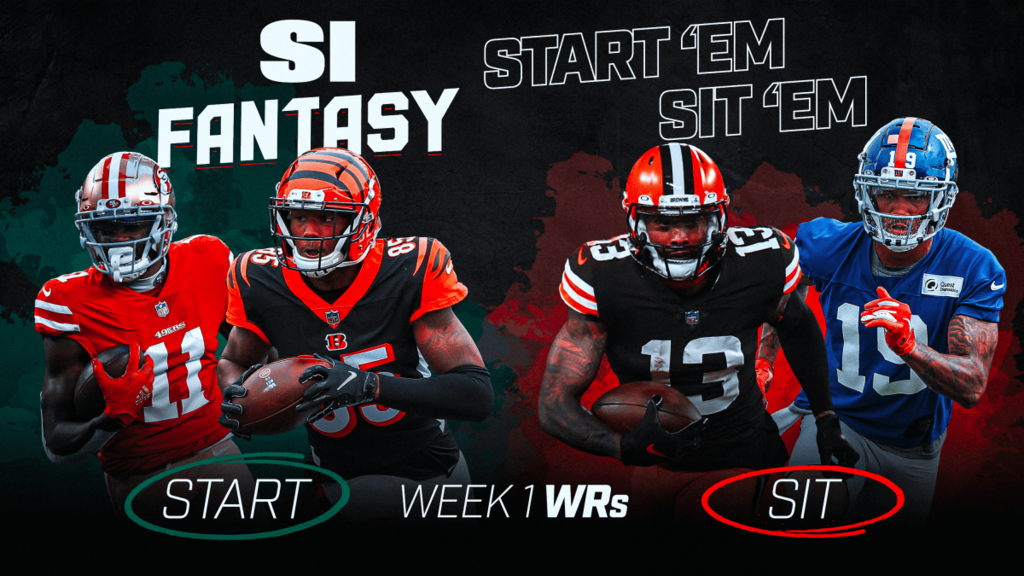 Tee Higgins vs. Vikings (1 p.m. ET, FOX): This week's matchup between the Vikings and Bengals could be a high-scoring affair, so I'm high on several players from both teams. That includes Higgins, who should be able to make waves against a Minnesota defense that allowed 24 touchdown catches and the sixth-most fantasy points to wide receivers a season ago. Higgins, Ja'Marr Chase, and Tyler Boyd are all nice options.

Brandon Aiyuk at Lions (1 p.m. ET, FOX): Aiyuk has a sweetheart of a matchup this week, as the Niners head to the Motor City to face the Lions. Last year, their defense allowed an average of more than 44 fantasy points per game to wideouts. Aiyuk has been dealing with an injured hamstring, so be sure to keep tabs on his status. If he is unable to start, Deebo Samuel will become an even better option in fantasy land.

Laviska Shenault Jr. at Texans (1 p.m. ET, CBS): One of my favorite sleepers of the season, the versatile Shenault should be considered a viable No. 3 fantasy wideout or flex option when the Jaguars face the Texans. Their pass defense was terrible against wideouts last season, allowing 22 touchdown receptions and the seventh-most fantasy points. This unit could be even worse in 2021, so start Shenault in the opening week.

DeVonta Smith at Falcons  (1 p.m. ET, FOX): Smith should be one of the top two or three options in the Eagles pass attack this season, and an opening week matchup in Atlanta makes him a viable fantasy starter. Last season, opposing wideouts scored 20 touchdowns and averaged the most fantasy points per game as a unit when facing the Falcons. That’s good news for the rookie, who should be on the flex starter radar.

Brandin Cooks vs. Jaguars (1 p.m. ET, CBS): In the category of “someone has to catch the football for the Texans,” I like Cooks this week as a No. 3 wideout or flex. He has a great matchup against the Jaguars, who allowed more than 41 fantasy points a game to home wideouts a season ago. Cooks also scorched them for a combined 47.4 fantasy points in two meetings last season, so Tyrod Taylor should look to him often.

Odell Beckham Jr. at Chiefs (4:25 p.m. ET, CBS): It’s tough to sit a player like OBJ, but keep these few things in mind. He hasn't played in a meaningful game in awhile, and he could start the season off slowly after coming off a major knee operation. The matchup in Kansas City isn't favorable either, as the Chiefs allowed an average of just 135.2 receiving yards and the second-fewest points to wideouts in 2020.

Kenny Golladay vs. Broncos (4:25 p.m. ET, FOX): Golladay missed a lot of playing time last month with an injured hamstring, so he's had limited time to build rapport with his new quarterback, Daniel Jones. Golladay himself even said he thinks the Giants could have a slow start on the offensive side of the football, which isn't what you want to hear as a fantasy fan. He'll be tough to trust in the first few weeks, so buyers beware.

Marquez Callaway vs. Packers (4:25 p.m. ET, FOX): Callaway saw his value go into the stratosphere in the preseason, scoring multiple touchdowns while earning a bigger role in the Saints offense without Michael Thomas (ankle). However, he has a difficult game this week as Callaway will face CB Jaire Alexander and the Packers. Their defense allowed 13 scores and the fourth-fewest points to opposing wideouts in 2020.

Curtis Samuel vs. Chargers (1 p.m. ET, CBS): The WR24 in fantasy land a season ago, Samuel has been dealing with an injured groin in recent weeks. That allowed him limited time to gain a rapport with his new quarterback, Ryan Fitzpatrick, and a game against the Chargers isn’t favorable. In fact, their defense surrendered the sixth-fewest fantasy points to enemy wideouts in 2020. This all makes Samuel a risk this weekend.