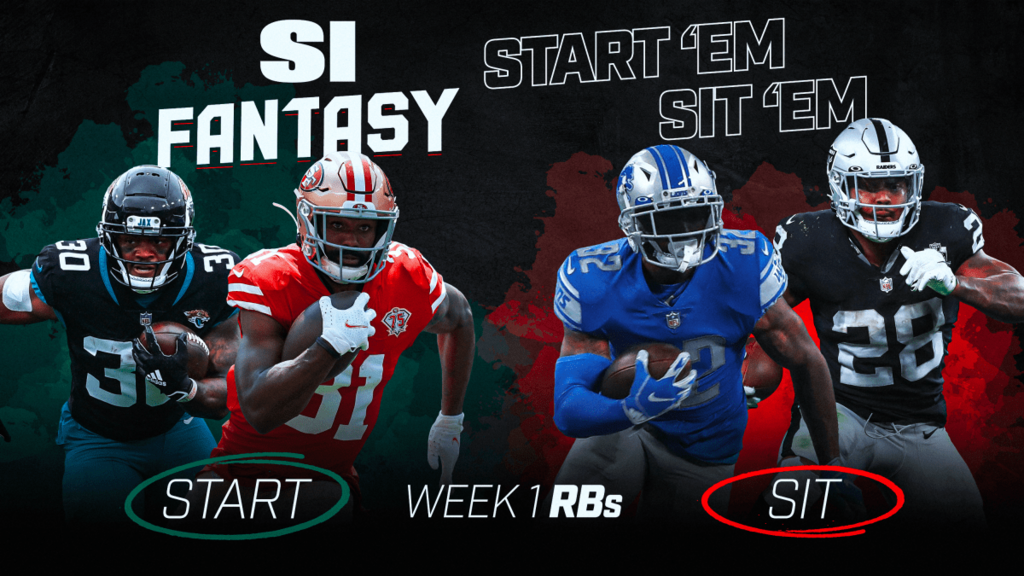 James Robinson at Texans (1 p.m. ET, CBS): Robinson value took a massive leap forward when the Jaguars, unfortunately, lost rookie Travis Etienne in the preseason. Last season's RB7, Robinson should now see a major workload in an offense that will look to establish the run. He should find success in the opener, as the Texans' defense allowed the second-most fantasy points to enemy running backs (31. 8 PPG) in 2020.

Raheem Mostert at Lions (1 p.m. ET, FOX): Mostert was drafted behind rookie Trey Sermon in countless fantasy drafts, but he's the Niners runner you want to start this week. The talented veteran has a bananas good matchup this week, as the Lions gave up more fantasy points to running backs (32.5 PPG) than any other team in the league a season ago. I won't be shocked if Mostert posts top-15 numbers among runners.

Miles Sanders at Falcons (1 p.m. ET, FOX): The Eagles backfield could have more of a committee look with Sanders, Boston Scott, and Kenneth Gainwell in the mix, but I still like Sanders as a No. 2 fantasy runner in a plus matchup against the Falcons. The over/under in the contest is just under 50, so the folks in Vegas are expecting many points on the scoreboard. Sanders should also benefit from Jalen Hurts under center.

Gus Edwards at Raiders (8:15 p.m. ET, ESPN): Everyone jump on the Gus Bus! The loss of J.K. Dobbins (knee) leaves Edwards as the top back in a Ravens offense that ran the ball more than 55 percent of the time last season, and a matchup in Las Vegas is very positive. Opposing road runners destroyed the Silver & Black, averaging 4.8 yards per rush and the fourth-most PPR fantasy points (28.9 PPG) a season ago.

Myles Gaskin at Patriots (4:25 p.m. ET, CBS): Gaskin's value took a bit of a tumble in the preseason when Malcolm Brown started ahead of him, but I still fully expect him to be the main runner in Miami. He's a solid flex option in most leagues this week when the Dolphins head north to face the Patriots, who allowed an average of more than 24 fantasy points a game to opposing running backs at Gillette Stadium last season.

Josh Jacobs vs. Ravens (8:15 p.m. ET, ESPN): Jacobs was a top-eight fantasy back last season, but he lost some luster when the Raiders added Kenyan Drake as a free agent. While he'll still be in countless starting fantasy lineups this week, I'd temper expectations against the Ravens. Their defense allowed an average of just 88.8 yards per game on the ground to backs last year, and Jacobs won't do much as a receiver.

D’Andre Swift vs. 49ers (1 p.m. ET, FOX): Swift missed a lot of time this summer due to a core injury, and his status for this weekend's game against the 49ers is uncertain. Even if he can suit up, Swift could be limited and will undoubtedly lose some of the workload to Jamaal Williams. What's more, a matchup against the Niners' defense is not what I would call favorable. At best, Swift will be a risk-reward flex option this week.

Michael Carter at Panthers (1 p.m. ET, CBS): Carter is expected to play a big role in the Jets backfield this season, but it might not happen right out of the gate. In fact, we could be looking at a three-headed backfield monster with Carter, Tevin Coleman, and Ty Johnson also getting work against the Panthers. Carolina's defense wasn't great against runners last season, but Carter's uncertain touch share makes him a gamble.

Melvin Gordon at Giants (4:25 p.m. ET, FOX): Gordon will be in the starting backfield for the Broncos this week, but it's difficult to see him in a true featured role with rookie Javonte Williams in the mix. The Giants' defense wasn't great against backs a season ago, so Gordon is on the flex radar for those fantasy managers in need at the position. But unlike seasons past, he is no longer a virtual lock for high-level numbers.