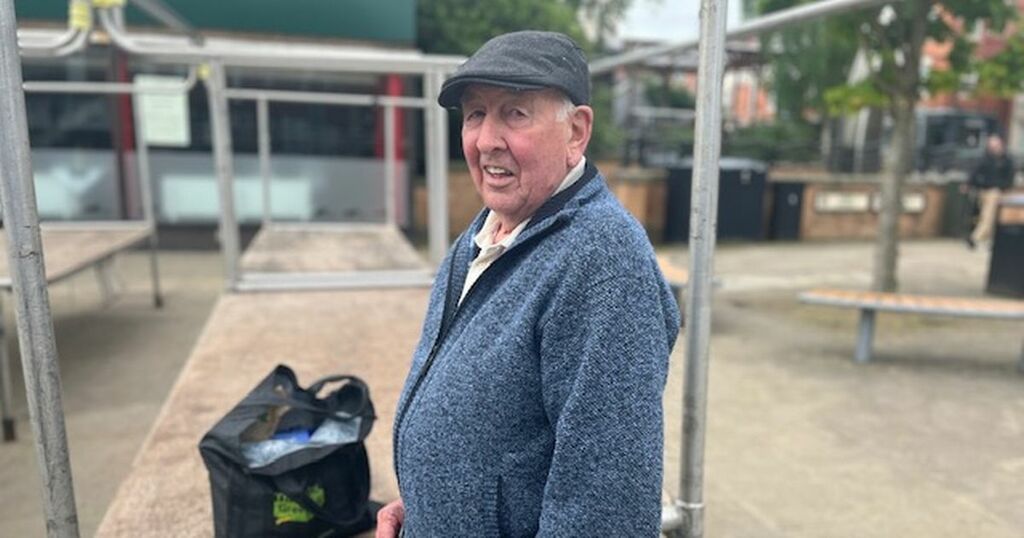 Residents have described a grandfather who was killed by his paranoid schizophrenic daughter as a "really nice neighbour" who had lived on the street for over 40 years. 77-year-old Ray Dixon died in March last year at his home in Moorbridge Lane in Stapleford after being stabbed three times in the chest and back.

His killer was 49-year-old Ann Dixon, who lived with her father, and had woken him up at 6am in his bedroom before repeatedly stabbing him - later popping to the kitchen to eat a bowl of cereal. She was said to be in the control of "omnipotent voices" with a doctor confirming the voice of the devil had instructed her to kill her father.

Last month, Dixon was handed a hospital order to "protect the public from serious harm", without limit of time. On a rainy Wednesday morning in May, those who still live Ray Dixon's old Stapleford street say the case is never far from their minds - and he is always in their thoughts.

Tim Gallagher, 73, lived on the other side of the road to Mr Dixon before his death - and knew him better than most. "My wife has been following the case," he said. "After it happened we were both interviewed by detectives, because we knew Ray quite well.

"Ray was a really nice bloke. He always seemed to have everything in order. We didn't see as much of his daughter, we would see her every now again. He was probably closer to me than anyone else, because I spend a lot of time in the garden and he would come over - he was a really nice neighbour to everyone.

"He and his wife both had the same song at their funeral - we're all going on a Summer Holiday by Cliff Richard. It's because they both loved going to Skegness, so it was a reminder of that. He was here for about 45 years. They [Ray and his wife] had saved up for three years and paid the house off."

Mr Dixon called the ambulance himself that morning on March 3, instructing his daughter to go to her room after she had returned with a bigger knife and re-entered his bedroom saying "die". Indeed, he bravely grabbed the knife from her before making his way downstairs. He was semi-conscious with his house key in his hand when police kicked in the back door to get in.

Steve Wheat, who also lives on Moorbridge Lane, told Nottinghamshire Live: "I spoke to Ann the night before it happened. She was coming down the street eating something - she was always eating - and I shouted to her 'is your dad alright?' Because I always asked how Ray was. She told me 'yeah but he's had a bit of a fall on the stairs'. I told her to look out for him and she said 'I will do Steve'. And that was it.

"The next day - that happened. It's tragic, it really is - Ray was a lovely man."

Dixon had tested positive for Covid-19 on February 26, 2021, and had a fluctuating temperature. She was at home with her dad at the time of her illness but began feeling a lot better and her 77-year-old dad had cooked her pancakes with honey. Days later, she killed him. At court, she pleaded guilty to manslaughter by diminished responsibility. Dixon, who worked full-time, always lived at home and had a history of depression.

Another Moorbridge Lane resident, who wished to remain anonymous, said: "Of course I remember the day well, there was police absolutely everywhere all of a sudden. The road was all taped off. It wasn't until later on that you learned about exactly what happened.

"I didn't listen to everything about the case as I didn't want to put myself through all of that. I just think it was all too sad. Everyone who lives here will remember what happened at that house."

Ray's other daughter Vicky, said: "On the day he died, my wonderful dad used his last ounce of strength to phone 999 to report what Ann had done to him. I can't describe the grief I felt and still can't, as it has changed my life and my family's life forever."

"This is unspeakably tragic and terrible," said Judge Gregory Dickinson QC. "I was shown earlier some truly lovely photographs. His character cries out from those pictures".

As he sentenced Ann Dixon, the judge said he had seen reports from four psychiatrists about her. "All the psychiatrists have been throughout of the same opinion - that Ann Dixon suffers from a severe psychotic illenss, specifically paranoid schizophrenia.

"She hears voices. We all have an inner voice, but, in psychotic illness, that voice appears to be coming from outside, from a third person, and that commands her to harm others."