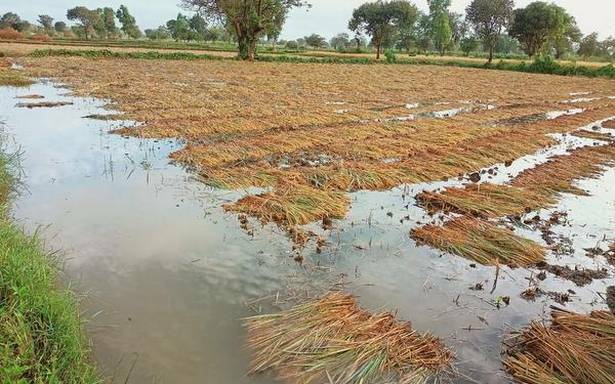 Heavy and unrelenting rain in several parts of Karnataka has resulted in both standing and harvested crops perishing on the fields. While the exact quantum is yet to be estimated, reports indicate extensive damage. Farmers are expecting a relief package from the State Government.

Heavy rain coupled with gusty winds has left large tracts of mature paddy fields flattened at Karatagi and Gangavati taluks in the Koppal district, two major paddy growing taluks of the State. Harvested paddy too is perishing at heaps.

“The grain formation of the paddy is over and the crop is at harvesting stage. The rain lashed on November 14 and 17 has damaged the standing crop,” said Sadashiv V., Joint Director of Agriculture, Koppal.

In Belagavi, taluks that border Western Ghats have received heavy rain over the last seven days.

Farmers in Khanapur, Belagavi, Chikkodi, Nippani, and Bailhongal have suffered losses of crops such as paddy, sugarcane, wheat, jowar, tobacco, and Bengal gram, and horticultural crops as well.

Most of the damage in Belagavi has been to harvested crops that were kept in the open for drying in the fields, with no place to store. Other standing crops such as sugarcane and banana were damaged owing to strong winds and heavy rain.

In south Karnataka, while cotton crop has taken a hit in H.D. Kote, vegetables cultivated on a vast swathe of land as short-term crop are rotting in the fields. Vivek Cariappa, a farmer from H.D. Kote, said waterlogging was intense owing to continuous rain and apart from cotton, other crops such as ragi, maize, and horsegram have also been affected in the region.

In Malnad region, growers of coffee, areca, paddy, and other crops are hugely disappointment. Many have not been able to harvest the yield owing to heavy rain. Those who could harvest coffee, could not dry them owing to the cloudy weather. They are all depending on mechanical dryers. Arecanut growers were hoping for good returns, given the prevailing price in the market, but rain has stopped them from harvesting the crop.