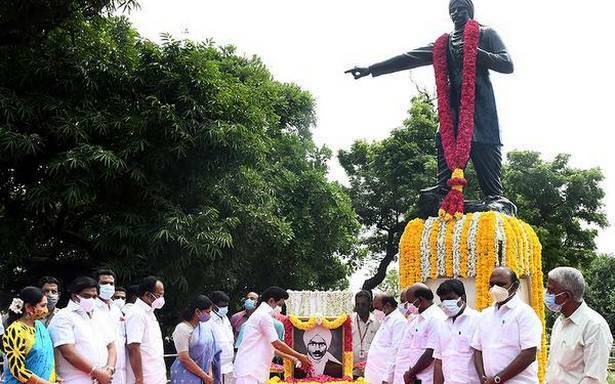 On Friday, the Chief Minister had made 14 announcements about observing the 100th death anniversary of Bharathiar.

The poet’s death anniversary will be commemorated as ‘Mahakavi Day’. Poetry competitions will be held at the State level for school and college students, and the ‘Bharathi young poet’ Award will be given to a boy and a girl student, along with a prize money of ₹1 lakh each.

Select songs and articles of Bharathi will be compiled into a book titled Manathil uruthi vendum. A research chair in the name of Bharathiar will be established at the Bharathidasan University in Tiruchi, the Chief Minister said. Tamil associations across the world will be roped in for various activities, and for the next year, weekly programs will be organised by the Information Department at Bharathiar’s memorial in Chennai, Mr. Stalin had added.

The State will provide financial aid to maintain the house in which Bharathi stayed in Kasi, Uttar Pradesh. The proposed park, to be set up by the Rural Development Department, for the welfare of women from SHGs, will be named after Bharathi, the Chief Minister had said. He also announced a cash award of ₹3 lakh each, along with appreciation certificates, to scholars who have done research on the poet and his works. Financial aid will be provided to those interested in making short films and dramas about Bharathi’s work. Displaying of his songs in writing and art forms in schools, colleges and bus stops and other important places, were also among the announcements made by the Chief Minister.

In Madurai, Collector S. Aneesh Shekhar said the district administration would seek the government’s approval for installing a life-size statue at the Sethupathi Higher Secondary School on North Veli Street, where the poet had served as a teacher.

In Tirunelveli, Madras High Court judge G. R. Swaminathan and the pontiff of the Madurai Adheenam participated in an event at the MDT Hindu College Higher Secondary School, where the poet had studied.

At the Bharathiar University in Coimbatore, a musical tribute was paid.