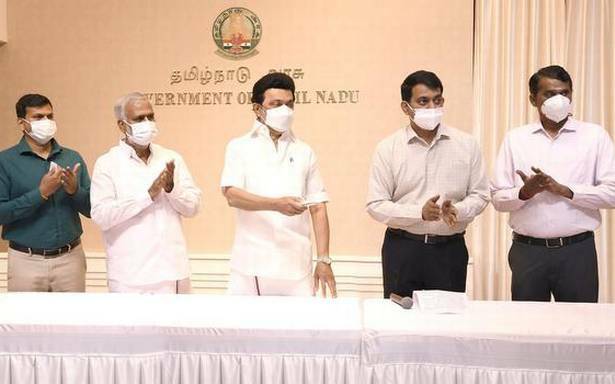 Tamil Nadu Chief Minister M.K. Stalin on Wednesday virtually launched the preliminary work towards the melting of gold ornaments, in temples under the control of the Hindu Religious and Charitable Endowments (HR&CE) Department, and converting them into gold bars.

“As per the provisions of the rules governing the Hindu Religious and Charitable Endowments Department, gold donated by devotees to temples have been converted into 24 carat gold bars since 1979,” an official release said.

A total of 497.795 kg of 24-carat gold bars have been deposited in nationalised banks so far. Gold jewellery from nine temples, including Arulmigu Dhandayuthapaniswamy Temple at Palani, Arulmigu Meenakshi Sundareswarar Temple in Madurai, Arulmigu Subramaniya Swamy Temple at Tiruchendur and Arulmigu Mariamman Temple at Samayapuram have been melted at the India Government Mint in Mumbai.

Earlier, the State government had appointed retired Supreme Court judge Justice D. Raju and two retired High Court judges, Justices K. Ravichandrabaabu and R. Mala to head three panels to oversee work to melt jewellery received as donation by temples into gold bars. The bars deposited in banks would generate revenue for the temples through interest earnings. The revenue generated will be used for the maintenance of temples, the government had said.