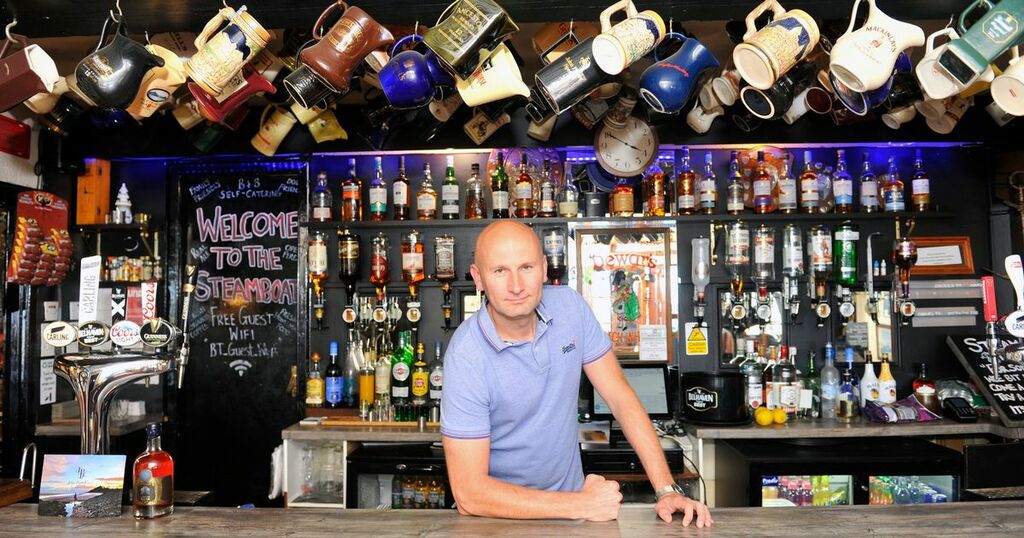 Staff shortages are hampering efforts by Galloway’s hospitality sector to cash in on a bumper summer season.

And recruitment difficulties appear most acute in tourist hotspots along the coast.

The Steamboat Inn at Carsethorn and the Anchor Hotel in Kippford are among those struggling to fill vacancies.

Blazej and Kate Reczko, who own the Steamboat, have has been forced to reduce opening hours as a result.

The popular eatery is currently closed on Mondays and Tuesdays to relieve pressure on workers.

Speaking to the News on Tuesday, Mr Reczko, 37, said: “Right now I’m seeing lots of cars pulling up in the car park.

“We would be choc-a-bloc if we were open. It’s heart-breaking.”

The prize-winning pub has been inundated with bookings – far more than they can currently handle.

Its seafront location next to the public car park and bus stop makes it a popular stopover for visitors.

“Nine of our students went back to uni and because of that we shut Mondays and Tuesdays.

This week the Steamboat was named best pub in south-west Scotland at the National Pub and Bar Awards 2021.

It was one of only four in Scotland and 15 in the UK to be named as a regional winner.

Mr Reczko added: “Hopefully soon we will be able to open seven days a week.

“Two or three new staff are at training and we are still recruiting.

“After lockdown people have been looking for different jobs – such as painting, gardening and driving for a supermarket.

“They realise they can finish at 4pm or 5pm. Hospitality can mean long hours and you need to work most weekends as well.”

Garry and Kelly Gibson took over the Anchor Hotel in Kippford two weeks ago.

And it has been a baptism of fire for the young couple trying to cope with demand.

“We are completely short staffed and have lost a few since we came in,” said Kelly. “Because we are so out of the way we are having to push advertising all the time.

“We are short of four full-time team members – two bar staff, a chef and one front of house. It’s not just us – everybody is in the same boat.”

The Anchor carries a staff of 25 including “five or six” senior pupils at Dalbeattie High who help out after school during the week and at weekends, said Kelly.

“My husband Garry and I are working 16 hours per day,” she said.

“A lot of people are being pinged and three staff members had to self-isolate because they were close contacts.”

But owners, husband and wife team Shashank Chandra and Tamisa Robertson, reckon they are weathering the storm better than most.

“Every single hotel and restaurant is in the same boat,” Mr Chandra said. “It’s a combination of factors but mainly the pandemic and people being furloughed.

“Luckily we have managed to retain our staff and are not woefully short.

“It is a problem – we have lots of friends and colleagues in the industry who are experiencing the same issue.”

Meanwhile restaurant boss Duncan McConchie says he has “never known it to be so hard” to find new staff.

He has been forced to reduce opening hours at Gather near Gatehouse due to a shortage of workers.

And he has now applied to the UK Government for permission to sponsor a migrant worker who is a qualified chef.

Mr McConchie said: “We have never known it to be so hard to find staff in our lives, chefs particularly.

“We have tried to recruit chefs for eight months, we have paid different agencies, we’ve paid for adverts in every place you can think of, we’ve taken part in a Scottish Government scheme to supposedly recruit people for hospitality and not had any applicants.

“We are looking to become sponsors of migrant workers to bring chefs in from overseas because it is the only way we can take control of the situation ourselves. Otherwise we would keep paying to put adverts out there sitting, waiting and hoping and nothing comes for it.

“We have an amazing team but our business can’t operate the hours it needs or wants to without bringing in migrant labour.”

He added: “I hope we don’t then come into criticism for not employing local people when that’s what we’ve been trying to do for eight months.”

He feels a combination of coronavirus, the furlough scheme and Brexit are behind the staff shortage.

He said: “There was a report that 92,000 people left hospitality and tourism and went back to their own countries when lockdown came into force and haven’t returned.