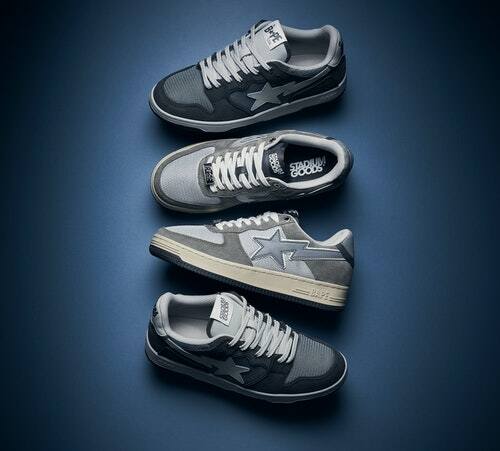 Stadium Goods, a premier sneaker and streetwear marketplace, is releasing its first original sneakers in partnership with BAPE. Special branded editions of the iconic BAPE STA shoe are dropping alongside collaborative versions of BAPE’s newest model, the SK8 STA.

The two-shoe capsule follows the launch of Stadium Good’s own streetwear brand, “STADIUM.” Offering elevated hoodies, sweats, and varsity jackets, the label arrived in March, with the intent of highlighting Stadium Goods’ deep roots in streetwear culture and community. A partnership with BAPE only strengthens that notion — the Japanese streetwear brand has been around since 1993, leading the exclusive fashion industry with limited collaborations and the likes of Kanye West, Pharrel, and Supreme.

But when Nigo, the founder of BAPE, sold his stake in the label in 2011, the notorious brand began to lose its streetwear credibility, releasing nonsensical collaborations solely to make money. Is its partnership with Stadium Goods just another cash grab, or does it actually celebrate the heritage and culture of streetwear?

As a marketplace for rare, experimental, and collectible sneakers, Stadium Goods has well-equipped itself to design its own pair of shoes. Utilizing its in-depth knowledge of sneakers — particularly BAPE’s BAPE STA model — Stadium Goods incorporated familiar color schemes and details into its upcoming shoes to make them resonate with both sneaker enthusiasts and casual sneaker fans.

Dressed in layers of gray mesh and suede, the duo’s BAPE STA sneaker stands out from the model’s typical brightly colored and patent leather makeup. BAPE’s signature STA logo accents the sides of the shoe in a darker gray leather, while lighter gray heel tabs flaunt the shoe’s name alongside Stadium Goods’ own.

BAPE’s newest silhouette, the SK8 STA, features similar, yet sleeker qualities as the BAPE STA. A white leather STA logo hits the sides of the shoe, while suede overlays are layered on top of mesh. Rather than keeping with the gray color scheme, however, the sneaker takes on a denim look: Hits of navy, heathered blue, and light gray are reminiscent of a classic pair of blue jeans. A rubber panel towards the heel — bearing the number 93 — further nods to tradition, representing BAPE’s founding year of 1993.

“BAPE is a staple in every sneakerhead’s closet, including mine, and we’re hyped to have the opportunity to work with them on the ‘BAPE STA’ and ‘SK8 STA’ models,” Greig Bennett, VP of Brand Creative and head designer at Stadium Goods, said in a press release. Bennett, who also leads the STADIUM line at the marketplace, added that its partnership with BAPE further fueled its momentum in apparel offerings. “This BAPE collaboration is a preview of what’s to come in 2022. We’re excited to continue sharing our in-depth knowledge and expertise of sneaker history and culture,” he said.

The Stadium Goods x BAPE sneaker collection is set to launch later this fall — in “limited quantities for a limited time,” warns a press release. Both the BAPE STA and SK8 STA will retail for $315 at Stadium Goods’ website.