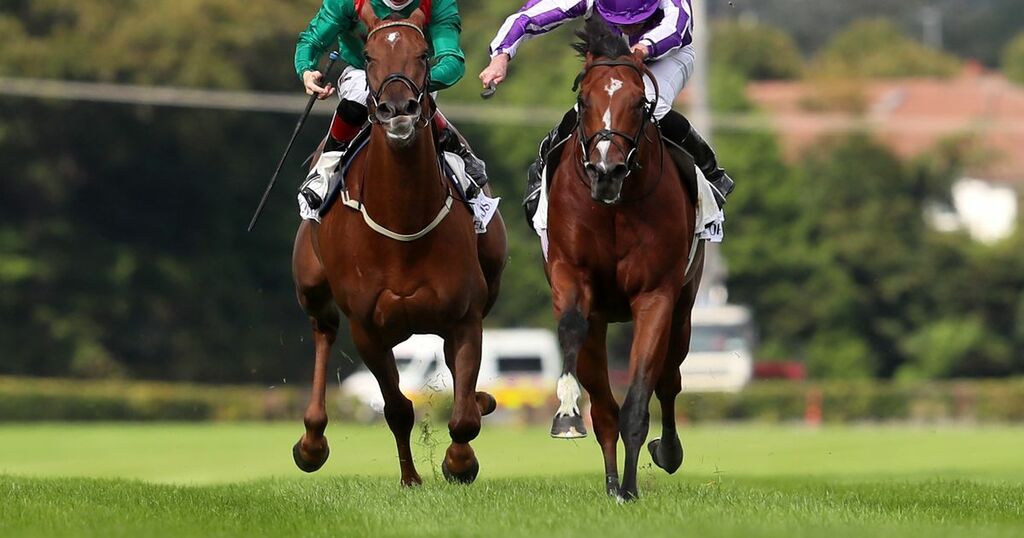 St Mark's Basilica preserved his unbeaten record for the season as the Irish Champion Stakes lived up to its billing.

Tarnawa, racing widest, chased the front two and just managed to get up for second place.

The mare was carried right by St Mark's Basilica up the centre of the track and a stewards' enquiry was called – but after around 25 minutes the result was confirmed.

St Mark's Basilica, the 5-6 favourite, was winning his fourth Group 1 – adding to the Dewhurst, French 2000 Guineas and Derby plus the Coral-Eclipse.

Trainer Aidan O'Brien said: "It was tactical, very tactical. They sprinted up the straight and he did well. He did well to get back here after missing York and the one thing we know he does is quicken.

"He really quickens, he's always had, and he relaxes and can really turn it on. He's done that in every race. He's an exceptional horse and we're very lucky to have him.

"The two targets he had were York and here. After that we were going to see where to go. He has all the options, he could go back to a mile, stick at a mile-and-a-quarter. All the big races are there."

The 1m 2f top level contest was watched by 4,000 spectators – and the result was welcomed by favourite backers after the first four races were won by horses at odds of 10-1 or more.

St Mark's Basilica is 2-1 from 7-2 with bookmakers Ladbrokes for the QIPCO Champion Stakes.

The firm's spokeswoman Nicola McGeady said: “Take nothing away from the front three in what was an epic battle, but with St Mark’s Basilica coming out on top, he is now the one they all have to beat in the QIPCO Champion Stakes next month.”