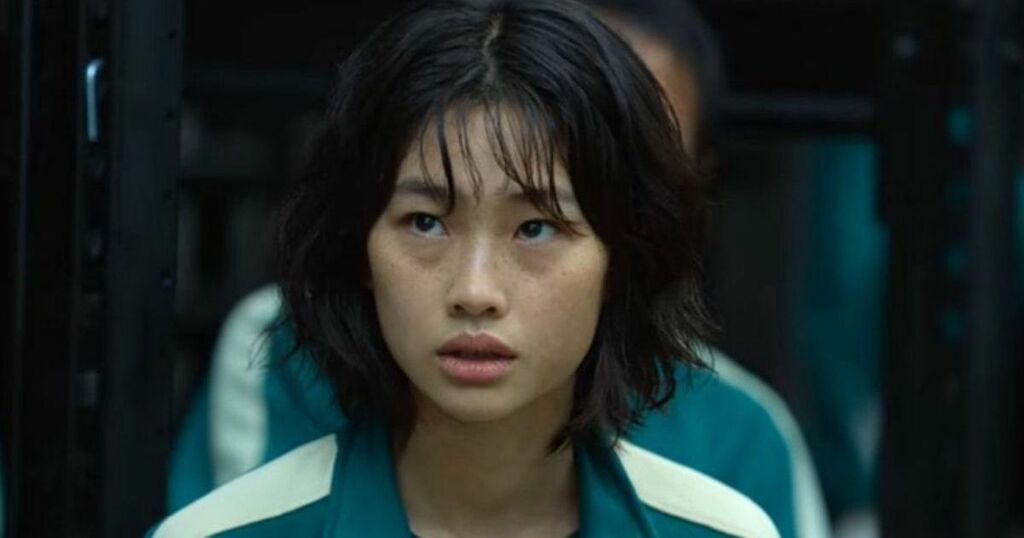 Squid Game has fast become one of Netflix's biggest shows of all time, having captured the attention of the world and catapulting its actors to international fame.

And for many, the stand-out star was HoYeon Jung, who played pickpocket Kang Sae-byeok.

HoYeon has become the most followed South Korean actress on Instagram within a matter of weeks, her follower count rising from 400,000 to a whopping 13million.

The 27-year-old was already in the public eye as a model and fashion influencer who had walked the runway at Paris Fashion week for houses including Louis Vuitton and Chanel.

And she was no stranger to intense game shows with high stakes wins and terrifying eliminations - she had starred on Korea's Next Top Model in 2013 and made it to the third week.

But while she was confident in her modelling success, Squid Game was one of her first forays into the acting world - and she was terrified.

"The first thing I said was, ‘Why?’" HoYeon has admitted of the day she found out she had been cast as Sae-byeok.

"I was so happy when I heard the news, but it was like a greater fear had taken over me - 'Thank you very much, but I can do this?'"

HoYeon had only been with her acting agency for one month in January 2020 when she was told she had to film an audition video with the Squid Game script.

She had been starring in New York Fashion Week at the time, and panicked because she had expected some level of acting training before being thrown in at the deep end.

The model was asked to film the video "as soon as possible" but she was so new to the acting world she had no idea how soon "soon" meant.

In preparation for her new role of North Korean defector Sae-byeok, HoYeon says she watched documentaries and practised the accent with a teacher.

Sae-byeok's accent was something that may have passed by some non-Korean Squid Game fans - she hides her North Korean accent unless she is speaking to her little brother.

But aside from the accent, HoYeon said it was fairly easy to slip into Sae-byeok's shoes because she feels an affinity with the "lonely" character.

"I think I was able to accept [the character] Sae-byeok without any big difficulties because I am similar to her," she told W Korea.

"In 2016, I left Korea to further my modelling career overseas, and I spent a lot of time alone. At the time, the emotion that I felt the most was loneliness.

"That feeling of loneliness while trying to persevere and live isn’t all that different."

She also admitted one scene had her in floods of tears when she read it. Warning: Spoilers below...

It was the emotional episode where Sae-byeok plays the marble game with Ji-yeong, played by Lee Yoo-mi.

The two women immediately bond, and when they learn only one of them will survive the round, they are heartbroken - in stark contrast to some of the other cruel competitors in the game who relish it.

They get to know each other and discover they both have been dealt tough cards in life and have simply done what they must to survive, and to best honour their families.

HoYeon told TIME : "The scene that made me cry was when Ji-yeong and Sae-byeok were talking to each other.

"I felt that the lines themselves were very well written by the director, and I saw this interview where he said that he envisioned this scene to be one with two people who are the most innocent out of all the contestants.

"When I read the script, I was sobbing. It was one of the big excitements for me to meet Ji-yeong in person – because at that time, I had to imagine Ji-yeong from the script, but when I met [Lee] at the table reading, I just felt that she's the one."

Director Hwang Dong-hyuk had called Sae-byeok and Ji-yeon "the most innocent" characters in the whole series.

"People who are on the verge of life fight and kill each other to climb up but if there were some that weren't like that, I wanted them to be these two," he said.

"They're complete strangers but there's some kind of friendship between them – a bond formed in a short period of time, empathy and understanding of each other."

"I thought they would be the perfect example to portray such feelings."

The pair have been together since 2016, though they keep their relationship low-key and tend not to flaunt it on social media.

He has also starred in films The Handmaiden, Confidential Assignment, New Trial and Extreme Job, which is the second highest-grossing South Korean film ever made.

HoYeon told Herald Pop that her loving boyfriend, who is nine years her senior, could not be more proud of her recent success - though he worries for her.

"Since he’s an actor, he’s a good senior, a good friend, and a good person," she gushed.

"He cheers me on a lot, and he worries for me as well. He’s sort of like a dad.

"He’s very proud of the success of Squid Game."