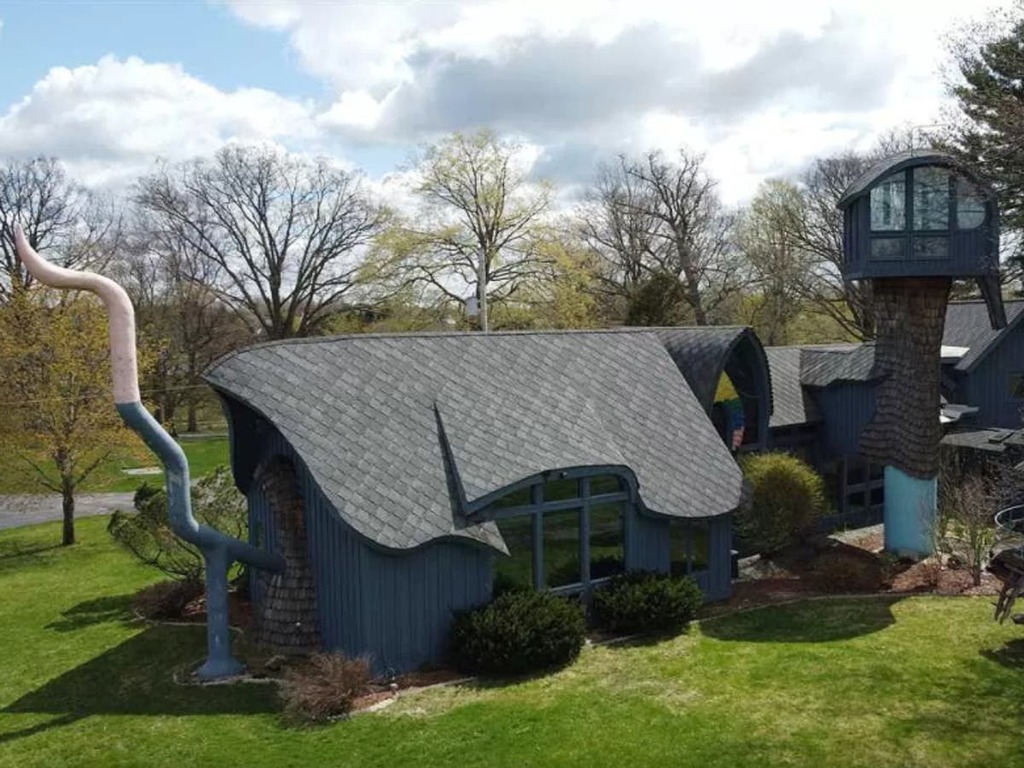 A unique five-bedroom property nicknamed the “dragon house”, which features a crooked “tail” and a motorised tower, has gone on sale in the city of Saginaw, Michigan.

The home, described as “impossible to duplicate”, has been listed on property search websites Century 21 Signature Realty and Zillow at US$539,999 (approximately £391,000).

Set over 16.45 acres, the property is divided between a main house, a fully-equipped one-bedroom barn that can be used as a guesthouse, two garages that can park up to seven cars, a 1,000-ft driveway, and a creek with a covered bridge.

The exterior of the property has been designed to appear like a home out of a fantasy, with a curved roof and large curled pipe “tail” which is actually a chimney that serves a wood-burning fireplace in the family room.

According to the listing, the “pièce de résistance” if the motorised rotating tower that truly makes the property “one of the most unique homes in Saginaw and maybe even the world”.

The interior includes a floor-to-ceiling cedar-lined walkway and cathedral-style vaulted ceilings. The master bedroom has three closets, a large “garden tub”, and a sauna.

According to the Mirror, the original owner of the one-of-a-kind home, which took 10 years to complete, was the owner of a trucking company.

Cris Sears, from Century 21 Signature Realty, told the newspaper that the tower was strong enough to withstand a crash by a bus driving at full speed.

He said: “I think the tower had a lot to do with him being able to better communicate with his trucks at the time.

“Unless you see the tower, people don’t realise how massive and solid it is. I think you could drive a bus full-speed into it and it would be fine.”