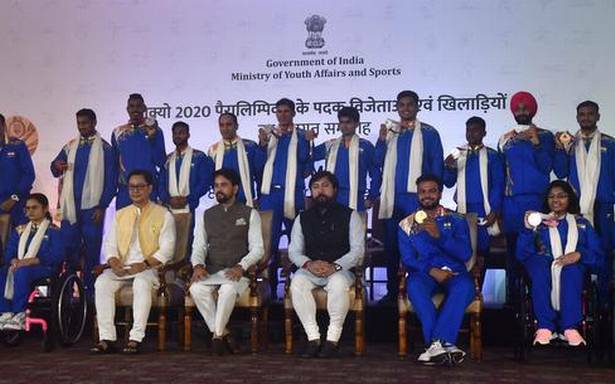 The Indian athletes who won 19 medals, including five gold and eight silver in the Tokyo Paralympics, were felicitated by the Sports Ministry in a warm and fitting function on Wednesday.

Three-time Paralympics medallist Devendra Jhajaria, who had won gold in 2004 and 2016, apart from a silver this time, was overwhelmed by the response from the whole nation, as he proudly said, “I have succeeded in my mission today.”

Jhajaria had spent his own money to compete in the 2004 Athens Olympics, and has seen the paralympic movement grow to inspiring heights. He said that the entire contingent was inspired by the Prime Minister’s interaction with the athletes.

“Our country gives so much respect to sports persons, that other countries are learning from our prime minister,” Jhajaria said.

Table tennis medallist Bhavina Patel said that she gained immensely by playing against an advanced robot which provided tremendous variety in improving her game.

The 19-year-old rifle shooter Avani Lekhara who won a gold and bronze said she was “so happy, and so grateful. Still a long way to go.”

The government support ensured an electronic target system was installed at her place during the pandemic, ensuring high quality training.

“It kept me motivated and kept me positive. It helped me win the medals,” said Avani.

Sports Minister Anurag Thakur said every athlete cherished the way the prime minister Narendra Modi had spoken to them.

sports. The athletes get what they deserve. We will leave no stone

unturned for supporting them in future. No target is too high and no

fear that they can’t overcome’’, said the minister.

The president of the Paralympic Committee of India (PCI), Deepa Malik

acknowledge the support of everyone, but was particularly appreciative

‘’I congratulate the coaches, I salute all the gurus’’, she said,

assuring that ‘’we are getting better’’.

athletes in the last Paralympics in Rio, the Indian contingent had 14

women athletes this time in Tokyo, and they had won gold and silver.

and said, ‘’you are the inspiration of the whole country’’.