By Ashifa Kassam in Madrid

The whereabouts of Spain’s scandal-hit former king remained shrouded in mystery on Tuesday, one day after it was announced that Juan Carlos would be leaving the country in a bid to protect the crown from mounting scrutiny over his financial dealings.

On Monday, Spain’s royal house published a letter sent by Juan Carlos to his son, King Felipe VI, saying he would “move, at this time, outside of Spain” amid the “public repercussions that certain past events in my private life are generating”.

The royal house did not give any indication of where the 82-year-old would go, and nor did Spain’s prime minister, Pedro Sánchez, on Tuesday.

Sánchez declined to say whether his government had played a role in the decision or how the former king would cover his security and living costs while abroad. Instead he expressed his “absolute respect” for the royal palace’s decision to “distance itself from allegations of questionable and reprehensible conduct by a member of the household”.

Juan Carlos had expressed his willingness to remain at the disposition of judicial authorities while outside Spain, he noted. “Here we judge people, not institutions,” he said, in remarks seemingly aimed at republican factions that have seized on the announcement to revive calls for a debate on Spain’s monarchy.

Soon after the announcement, media in Portugal reported that he was in the Portuguese riviera, where Juan Carlos, who was born in exile in Rome, had spent part of his childhood. Spain’s La Vanguardia newspaper said the former king had travelled to the Dominican Republic via Portugal, where he would stay temporarily at a luxury villa owned by friends. However, the Dominican Republic immigration office on Tuesday denied that Juan Carlos had arrived in the country.

He has expressed a desire to soon return to Spain, the broadcaster RTVE said on Tuesday, citing sources close to the former king.

In recent years, a cloud of allegations has swirled around Juan Carlos, undermining the monarchy’s tenuous grip on power and denting the popularity of a leader who played a pivotal role in restoring democracy to Spain after the death of Gen Francisco Franco in 1975.

Juan Carlos abdicated in 2014, two years after he apologised to Spaniards for jetting off on an elephant-hunting trip to Botswana as Spain grappled with the devastation wrought by the financial crisis. News that he would hand the crown to his son, Felipe, roused long-simmering republican sentiment across the country, with tens of thousands taking to the streets to demand a referendum on the monarchy.

Pressure had intensified in recent weeks on the former king and his son to take action to protect the monarchy’s reputation after Spain’s supreme court launched an investigation into the former king’s role in a deal in which a Spanish consortium landed a €6.7bn (£5.9bn) contract to build a high-speed rail line between the Saudi cities of Medina and Mecca.

In the letter released on Monday, Juan Carlos said his decision had been made to try to help Felipe “exercise his responsibilities” as king.

“I have been king of Spain for almost 40 years and throughout them all I have always wanted what is best for Spain and the crown,” he said.

While the royal palace did not respond to queries as to how the decision would affect Juan Carlos’s wife, Sofía, a source close to the palace told AFP that she remains in Spain. The couple have reportedly long been estranged.

The dramatic exit prompted a range of reactions in Spain. The leftwing Podemos, which was among the parties pushing the Spanish parliament to launch an investigation into the business activities of the former king, argued that Juan Carlos should have stayed in Spain.

“There is no reason at all to keep supporting a monarchy which doesn’t possess minimum ethical standards,” it said in a statement late Monday.

The steady drip of scandalous allegations concerning the king’s personal life and business dealings had left Juan Carlos with no other option but to leave, said the historian Jordi Canal. “The king belongs to another era,” he said. “He doesn’t understand that things have changed, that society has changed, that there’s a new generation with new values and so he can’t do what he used to do.”

News of the former king’s exit is unlikely to result in broader questions over the future of the monarchy in Spain, said Paloma Roman, a politics professor at Complutense University in Madrid, as much of the country’s attention remains on a coronavirus outbreak that has left it with one of the highest excess death tolls in Europe and its worst recession in modern history.

Still, the former king’s exit is a blow to a fragile monarchy, she said. “It’s humiliating. He’s following the same path as his grandfather, who was exiled.”

In March, the royal house announced that Juan Carlos would be stripped of his annual stipend and that Felipe would renounce his own inheritance, after reports that he was in line to receive millions of euros from a secret offshore fund with ties to Saudi Arabia.

Swiss prosecutors are looking into a number of accounts held in the country by the former monarch and his alleged associates. It is alleged in documents from the Swiss prosecutors that Juan Carlos received a $100m (£85m) “donation” from the king of Saudi Arabia that he put in an offshore account in 2008. Four years later, he allegedly gifted €65m (£59m) from the account to his former lover Corinna Larsen.

Juan Carlos has said he never told his son he was set to benefit from two offshore funds, but he has made no further comment on the allegations. 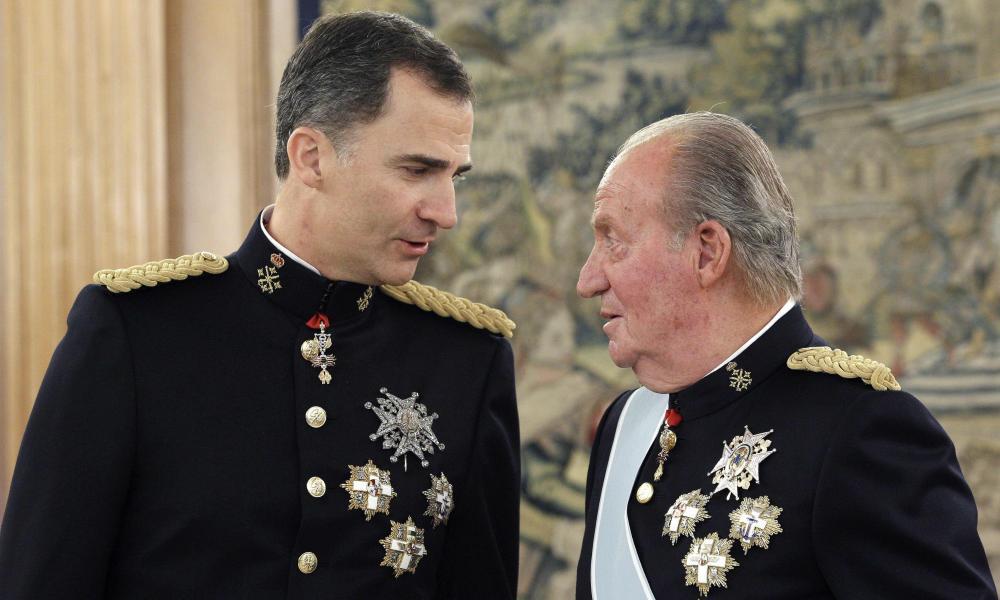 Spain's scandal-hit former king Juan Carlos to go into exile
The 82-year-old says he is moving abroad to help son ‘exercise his responsibilities’ as kingNew story: Spain speculates over whereabouts…

The Guardian - UK
One subscription that gives you access to news from hundreds of sites
Spain’s Disgraced Ex-King Juan Carlos Goes Into Exile: The Fall Of A Modern Monarch

Spain’s former king has gone to the Dominican Republic after leaving his home country under a cloud of scandal,