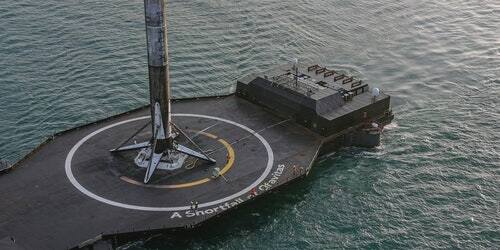 SpaceX’s new drone ship is taking to the sea in style.

On Sunday, CEO Elon Musk shared an image via Twitter of the company’s latest booster rocket-catching ship returning to land in the glistening sun. Dubbed A Shortfall of Gravitas — another science fiction reference — the ship will help SpaceX reuse even more Falcon 9 rocket components and reduce costs down further.

Reducing costs, of course, helps SpaceX fund some of its more ambitious goals. The company is developing the Starship, a fully-reusable rocket designed to replace the Falcon 9 and send the first humans to Mars. Musk’s long-term goal is to establish a city on Mars by 2050 — which he estimates will cost somewhere between $100 billion and $10 trillion.

With a price tag like that, saving every penny helps. Musk estimated in 2013 that the booster comprised around three-fourths of the total price tag associated with a mission, listed at around $62 million. Landing at sea means the rockets can reach higher velocities and still find their way back to Earth, he explained in 2016.

As SpaceX is on track to reach 30 launches this year, the most ever and four more than its previous record, it’s perhaps little wonder that it’s investing in a bit more help.

Want to find out more about SpaceX’s plans for the future? Subscribe to MUSK READS+ for exclusive interviews and analysis about spaceflight, electric cars, and more.

The ship supported its first mission on August 29. This was the 23rd Commercial Resupply Services mission, the latest in a series of launches for NASA that sends cargo to the International Space Station.

A Shortfall of Gravitas is a notable upgrade over previous ships. SpaceX explained during the mission launch livestream that it improves over its predecessors with a fully autonomous operation procedure. That means it can travel to sea, find its position, receive the rocket, grab the rocket with the “octograbber” robot and return it to land — all autonomously.

Previous ships required a tugboat to pull the ship out to the correct location. SpaceX used the tugboat for the new ship’s first outing, with full autonomy planned later.

The Falcon 9 lifted off from Launch Complex 39A at NASA’s Kennedy Space Center in Florida at 3:14 a.m. Eastern time. The rocket launched a Dragon capsule containing over 4,800 pounds of crew supplies and scientific research supplies.

The booster successfully landed on the new ship stationed in the Atlantic ocean just over seven minutes after liftoff.

Musk’s image, which shows the ship and booster on the sunlit water, was previously shared by SpaceX three days after the mission on September 1.

In February 2018, Musk told Florida Today that SpaceX will use the third ship to support more frequent flights from Florida.

With its successful mission last month, the new ship has become the first to complete its first attempted landing.

But while it may prove useful for SpaceX’s short-term plans, Musk has different goals in mind for the longer term. The under-development Starship rocket, designed to take over Falcon 9 operations, may return to Earth with a giant grabbing arm dubbed the “Mechazilla.” If successful, it would represent another major breakthrough for the space-faring firm.

SUBSCRIBE TO MUSK READS+, A PREMIUM NEWSLETTER THAT COVERS THE WORLDS OF ELON MUSK, SPACEX, TESLA, AND EVERYTHING BETWEEN.