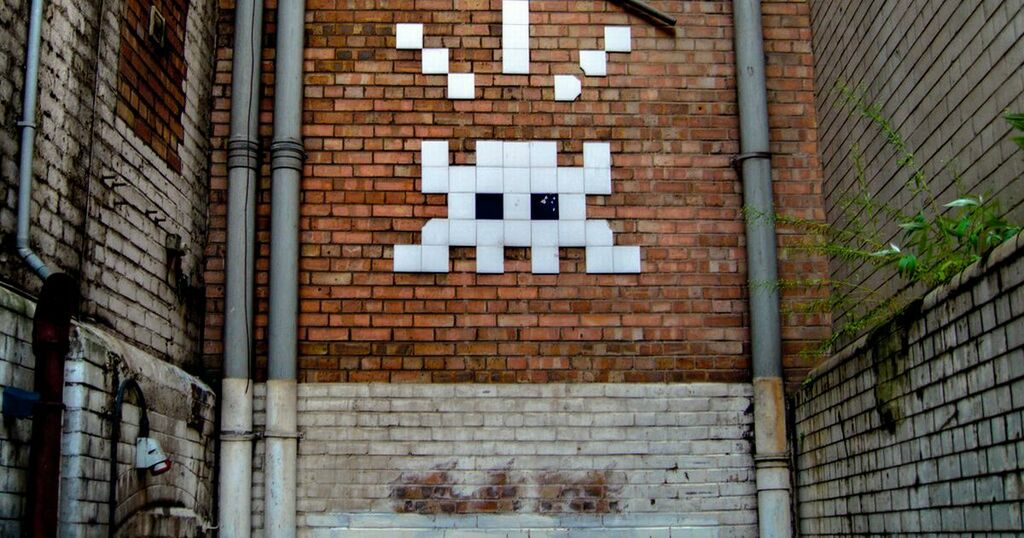 If you’ve been walking down Canal Street and have by chance looked down to see where you’re walking, you might have spotted a tiny mosaic of a Space Invader nestled next to the street sign.

Don’t be alarmed by the extra-terrestrial sighting- you’ve not been contacted by aliens conveying secret messages through artwork but rather you’ve spotted one of a series of pieces that incorporate the famous Space Invaders graphics from the screen to the street.

The brainchild of anonymous French artist ‘Invader’, the little aliens are dotted in various locations around the city, and have been a feature- albeit a somewhat hidden one- of the city centre for more than a decade.

Known locations include Salmon Street, Dantzic Street, Canal Street, Newton Street, and Bunsen Street – but there could be many more on and around recognisable landmarks in the city centre.

They first appeared in 2005, seemingly coinciding with the release of a compilation of Space Invaders games being released on PlayStation 2.

The street art was the brainchild of a mysterious French artist known only as ‘Invader’, who still operates on a global scale to this day.

Calling themselves a UFA, an ‘Unidentified Free Artist’, their art aims to explore international densely populated urban areas and “invade” them with the mosaics.

So far, only Manchester, Newcastle and London have been targeted but the anonymous artist claims to have got his pieces across the globe, from Israel, Kathmandu and even as far as Tokyo, with 3999 ‘invader’ pieces across 79 cities.

In a statement to their website, the artist said: “It is first of all about liberating Art from its usual alienators that museums or institutions can be. But it is also about freeing the Space Invaders from their video games TV screens and to bring them into our physical world.

“Everything started the day I decided to give a material appearance to pixelization through ceramic tiles. I first wanted to create a series of "canvases" but I soon realised that tiles were the perfect material to display these pieces directly on the walls.

“I then had the idea of deploying my creatures on the walls of Paris and soon after in cities around the globe. Each of these unique pieces become the fragment of a tentacular installation.”

When the mosaics first appeared back in 2005, coinciding with the 25th anniversary of the popular game, the city council was initially resistant to the street art, condemning it as ‘mindless vandalism’.

A city council spokesman said at the time: "We are currently investigating the appearance of ceramics. On the face of it, this would appear to be illegal advertising, but rather more seriously an act of criminal damage.

"If we find this is the case, we will use all our powers to identify the perpetrators. They need to understand that such mindless vandalism will not be tolerated."

Even the creators of the game got involved, with a spokesman for Taito, the Japanese corporation which invented the game, commenting: "Space Invaders has attracted a cult following around the world and still remains hugely popular. The franchise has always done us proud.

"We don't condone people marking private or public property, but the fact that the game has recently been re-released to mark its 25th anniversary may have something to do with the sightings.”

Despite the council’s threat to remove the pieces, and the architecture of Manchester having changed over the years, the space invaders have remained.

One resident described the artwork as ‘very cool’, adding: "I can't think of any other game that has attracted such a cult following as Space Invaders, whatever the reason for the mosaics.”

So when you're next walking the streets of Manchester, keep your eyes peeled for these little aliens- you might even spot a new one.