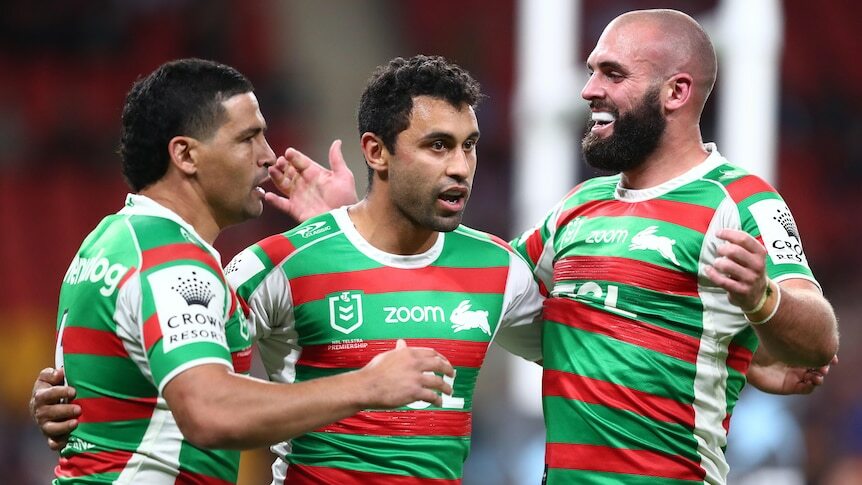 South Sydney winger Alex Johnston says the self-belief among the Rabbitohs squad is as strong as it was in 2014, the last time the club won an NRL premiership.

The Rabbitohs are one victory away from advancing to the grand final after producing a shock 16-10 triumph over Penrith in the opening week of the play-offs.

"We have definitely got the belief like we did back then [2014], we just have to maintain that for the last couple of games," Johnston said.

He added the Rabbitohs took great confidence from halting a recent losing streak against the Panthers.

"I don't think we've beaten them [Panthers] the last five times we've played them, so it was gutsy from the boys and we are stoked to get the win," he said.

Johnston said the Rabbitohs would relish not having to play this weekend.

They will face either the Sydney Roosters or Manly in a preliminary final on September 24.

The Roosters and Sea Eagles meet on Friday night in a semi-final in Mackay.

"We've got the week off so we've just got to get the body right and prepare better mentally than we have in previous years and look forward to whoever we are [playing] next," Johnston said.

Rabbitohs have 'desire' to go all the way

The Rabbitohs are bidding to make just their second grand final in 50 years.

This is their fourth consecutive preliminary finals appearance, having lost on each occasion in the previous three seasons.

Johnston said there was greater hunger to reach the grand final among the players this year.

"We've got the desire, it's been building up over the last few years where we've fallen short, now we've got just two games to go," he said.

Rabbitohs prop Mark Nicholls shared Johnston's faith they could qualify for the grand final and win the premiership.

"We always had the belief we could get the job done, and the teams that have had the week off have really benefited," he said.

Johnston said he had been impressed by the performance of rookie Rabbitohs fullback Blake Taaffe against the Panthers.

"He's silenced the critics playing the way he did, he's everything you want in a fullback."

Meanwhile, Panthers halfback Nathan Cleary said his side was not panicking following the defeat to the Rabbitohs.

The loss has made the Panthers' route to the grand final difficult, as they will have to face the Melbourne Storm should they beat Parramatta in Saturday night's semi-final in Mackay.

The Storm beat the Panthers in last year's grand final and pipped Cleary's team for this season's minor premiership.

"We are lucky enough to put ourselves in this position that we get another chance," Cleary said.

"We've got a good positive vibe around here now and everyone is ready to turn it around this week."