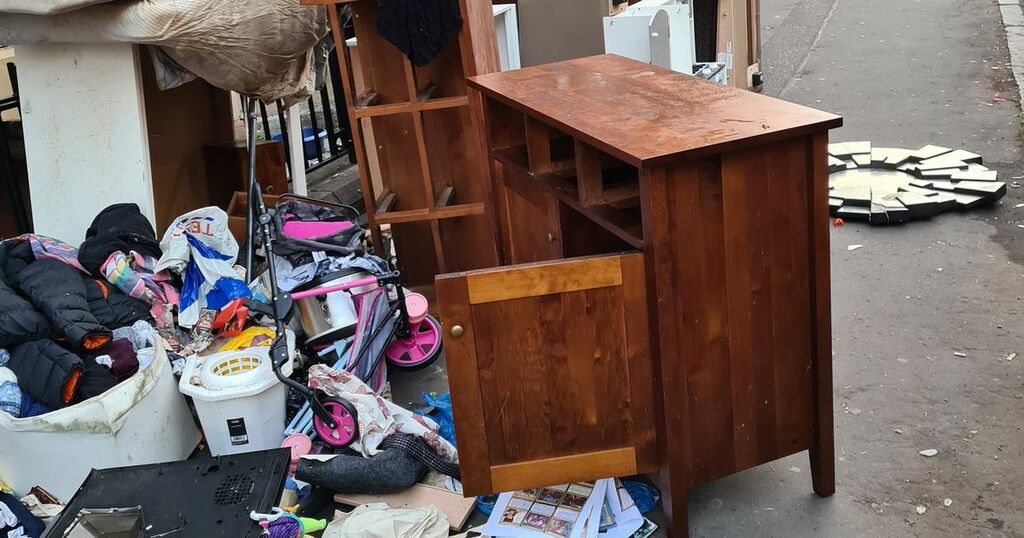 Update: The street has now been cleared.

Shameless fly-tippers left the contents of a flat sprawled across a residential pavement causing a 'health and safety' nightmare for residents.

Dixon Avenue has long been plagued by fly-tipping with bins often left overflowing with business waste and household items dumped in the street where domestic refuse bins are kept.

The situation was made worse with bulky items including mattresses, bed frames, an office chair, and a baby carrier being dumped across the pavement overnight.

A local told Glasgow Live that a full crew in hazmat suits gutted the flat on Tuesday but left everything they removed on the street.

Dumping has become such an issue on the street that a dedicated social media page to highlight the mess has been created.

Pictures shared on the page have been met with outrage. One commenter said: "I used to live down there. It’s never been 100% clean but it’s never been this bad. So sad to see it looking such a mess" while another added "That’s horrendous. The Council needs to get this cleaned up and whoever dumped all that crap there should pay for the uplift!! When did people stop taking pride in where they live?!"

We reported how locals have been forced to clean up the street themselves on previous occasions.

One told Glasgow Live: "We can’t do the job of the council, it’s too much. For most of us in the neighbourhood in the summer it’s a bit depressing. Having a break after your shift at home and seeing that just makes you angry. We’ve really been feeling like we’ve been doing so much in the community but it’s too much and it doesn’t last.

“We are tired of repeating the same thing but we don’t want to just accept it. This just isn’t right, in a civilised city. Things could be better. We’re ashamed to invite friends here."

A spokesman for Glasgow City Council said: “It is completely unacceptable to dump waste in the street in this way.

“The person responsible in this case is clearly seeking to avoid a basic responsibility to dispose of their waste in the proper manner and we will be investigating further.

“It would have taken some time for this amount of waste to be moved to the street and there is every chance that those involved will have been visible to others living in the area.

“If anyone has any information on who committed this environmental crime then they can contact our environmental health team, which will support enforcement action being taken against the culprits.

“We will also be contacting the factor at this address so that owners and residents are clear on the correct way to dispose of unwanted items.”