Parts of the Brisbane CBD have been evacuated over fears a large crane could sail down the river and cause "significant damage", while authorities brace for another "major" flood of the Brisbane River.

Thousands of homes in south-east Queensland have been flooded and 43,000 are without power after days of heavy rainfall caused significant flooding across the area.

The Brisbane River's peak during the 2011 floods was 4.46m, but anything 3.5m and above is considered a major flood.

"It's easy to think we're out of the woods but there are still flood peaks to come," Lord Mayor Adrian Schrinner told ABC Radio Brisbane.

"We will also have additional peaks tomorrow and every high tide will coincide with those peaks."

A 400-tonne barge with a 150-tonne crane on top was also at risk of coming completely loose at inner-city suburb Kangaroo Point and sailing down the Brisbane River toward Howard Smith Wharves in the CBD, authorities said.

The pontoon is still tethered within the fast-moving current but is at risk of coming loose and causing "significant damage".

"It's still tethered at the moment … but it has some integrity issues along with its tethering and we are concerned that those tethers may break," Police Minister Mark Ryan said.

Howard Smith Wharves has been evacuated and police are keeping crowds out of parts of Captain Burke Park under the Story Bridge, and from along the riverside at Eagle Street Pier.

Authorities still hold fears for several missing people, including a person who drove into floodwater at Yatala south of Brisbane and a person missing near Esk, west of Brisbane.

Late on Monday morning a man was found dead in floodwaters on the Gold Coast, taking the death toll during south-east Queensland's weather emergency to eight.

The man, believed to be in his 50s, died after his car was washed away in the Currumbin Valley in the early hours of this morning, Queensland Police said.

Police received reports of a car in trouble about 3am local time but could not find the vehicle. The vehicle was believed to have been driven 30 to 40 metres into floodwaters.

Later in the morning, at about 10:45am, Surf Life Saving Queensland found the vehicle, with the man and a dog inside.

On Sunday night a man died after being swept away while trying to cross Cabbage Tree Creek Road at Fitzgibbon on Brisbane's north side.

Two members of the public saw the 59-year-old and tried to rescue him, conducting CPR once he was out of the water.

Paramedics also responded but the man died at the scene, according to police.

As of Monday afternoon, a search was still underway for a man who fell into the Brisbane River a few days ago.

However, a person who was reported missing after trying to retrieve animals at Goodna in Ipswich was located safe and well, Queensland Police said.

More than 1,000 schools across south-east Queensland were closed today, and most will remain closed tomorrow too.

Some schools in the Sunshine Coast, Noosa and Lockyer Valley local government areas will begin to reopen tomorrow.

The wild weather has already left widespread damage and flooding in its wake and will continue to affect thousands of residents for days.

More than 48,000 households across south-east Queensland were still without power.

Energex warned the majority of customers could be waiting days for their power to be restored, especially those in badly affected parts of Gympie, Brisbane and the Lockyer Valley.

"It could be later in the week, if not early next week," Energex spokesperson Danny Donald said.

Brisbane councillor Kara Cook said it had been a "big few days" in the riverside suburbs of Bulimba, Hawthorne, Morningside, East Brisbane and Norman Park but the rain finally stopping had made a "huge difference".

"There are powerlines down in Hawthorne and almost that entire suburb is still without power and has been since Saturday," Ms Cook told ABC Radio Queensland.

On Monday morning Queensland Premier Annastacia Palaszczuk up to 18,000 homes across the region had been flooded.

"In Gympie, we have about 3,600 homes that have been impacted. In Brisbane we're estimating there could be up to 15,000 houses that are impacted," Ms Palaszczuk said.

More than 1,544 people were in evacuation centres across the south-east on Monday morning, and councils were opening more centres.

Emergency services also received thousands of requests for assistance, and conducted hundreds of water rescues around the Brisbane, Gold Coast, and Beenleigh areas.

Historic flooding in Maryborough, while Logan and Beaudesert under watch

A major and historic flood hit Maryborough, about 220 kilometres north of Brisbane, where the Bureau of Meteorology (BOM) said the Mary River may reach up to the 10.7-metre peak height observed during TC Oswald in 2013.

It is likely to stay above major flood level into Tuesday.

The BOM predicted the Logan River at Beaudesert recorded a major flood peak of 13.62 metres around 12:30am and was slowly falling.

The Albert River at Wolffdene was falling, following a peak around 12.3 metres on Monday morning.

In Ipswich, Goodna was the worst-affected area with families having to be rescued on Sunday night.

As of 2:15am this morning, Wivenhoe Dam was sitting at more than 185 per cent capacity.

The level slowly dropped to about 176 per cent on Monday evening.

Releases from North Pine Dam, which was sitting at about 68 per cent.

Seqwater spokesman Mike Foster said Somerset and Wivenhoe dams combined had held back about 2.2 million megalitres of water, compared to the 150,000 megalitres which have been released.

People in flood-affected areas of south-east Queensland and some parts of northern New South Wales are eligible for disaster relief payments from today. 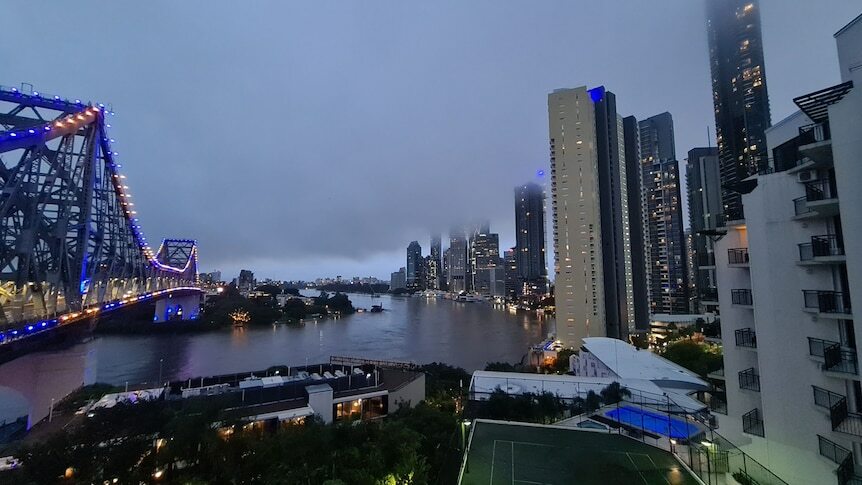 ABC News
One subscription that gives you access to news from hundreds of sites
South-east Queensland weather emergency continues with Gympie set for record flood peak, as it happened

ABC News
Floods in Queensland and NSW: what we know about areas affected, and what’s likely to happen next

Eight people have died, more are missing and hundreds have been rescued as flooding hits Brisbane, Lismore, Murwillumbah and Grafton

The Guardian - AU
Brisbane and south-east Queensland's weekend of wild weather and flooding, in pictures

In the past week parts of south-east Queensland received "scary" amounts of rain, dams from the Sunshine Coast to the…

ABC News
One subscription that gives you access to news from hundreds of sites
Floods in south-east Queensland and northern NSW: what has happened and which areas could be hit next?