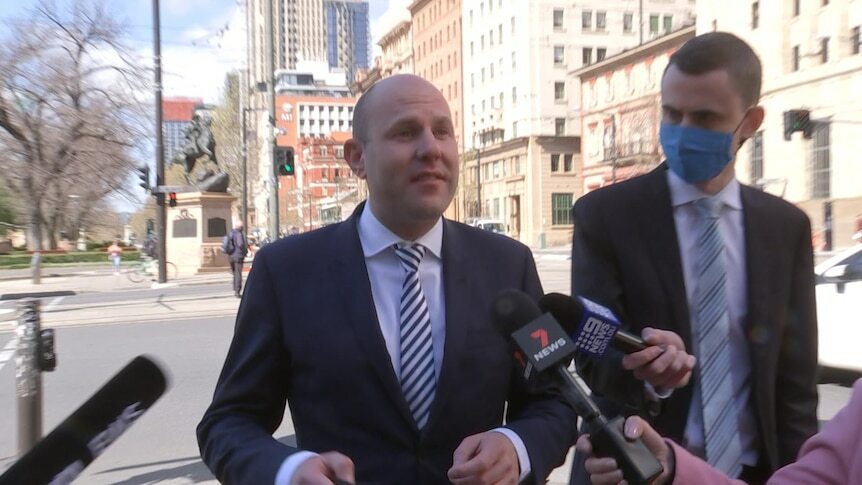 A stalled South Australian parliamentary investigation into the drunken behaviour of MP Sam Duluk at a 2019 Christmas party will not resume, despite Premier Steven Marshall declaring it should continue, to help decide whether the exiled Liberal can rejoin the party.

Speaker Josh Teague told the House of Assembly it was "not an ideal situation" for a speaker to undertake the work of an investigator.

Last month, Mr Duluk — a former Liberal who has become an independent — was found not guilty of assaulting his parliamentary colleague, Connie Bonaros.

At the time of the verdict, all sides of politics called for the resumption of an independent inquiry into Mr Duluk's behaviour at the cross-bench Christmas party.

Paul Hocking from Quark & Associates was undertaking the review when it was announced in January 2020 by the former speaker, Vincent Tarzia.

"The scope of the independent investigator's inquiries will be to endeavour to obtain full particulars as to what took place concerning the alleged conduct of Mr Duluk and to provide a report for the Speaker's consideration," Mr Tarzia said at the time.

It was never revealed if the results of the investigation would be made public.

Today, Mr Teague said the court had already worked out what took place at the party so the investigation would not need to be resumed.

"I received a copy of the Magistrate's reasons for judgement," Mr Teague said.

"As well as dealing with the charge, the reasons set out findings of fact in relation to the subject matter of the Speaker's investigation.

"They are numerous — more than 20 separate findings of fact — and they address what took place, where and when.

"I do not, therefore, intend further to undertake investigations into the matter."

Calls for inquiry to resume from all sides

Members of the Liberal, Labor and Greens parties had all called for the independent investigation to be resumed after the court verdict was handed down.

Both Mr Marshall and senior federal Liberal and Finance Minister Simon Birmingham said they expected Mr Teague would decide to resume the inquiry.

Mr Marshall said his party would not make a decision on Sam Duluk's future in the party until after the inquiry "produced its recommendations and any results".

"I would expect that the Parliament will make a decision to resume the parliamentary inquiry which surrounded the incidents in question," Mr Marshall said.

Greens leader Tammy Franks said there were at least 10 people at the party yet to be interviewed.

Mr Duluk suspended his own Liberal Party membership when the police investigation got under way and after the Premier called his position in the party "untenable".

Today, Mr Duluk did not comment on his future in the party but issued a statement welcoming the Speaker's decision.

"I know that, daily, I have taken positive steps to reflect and improve as a person.

"I seek to continue to serve the people of Waite to the best of my ability."

Mr Duluk has not responded to questions about whether he will apply to have his membership reinstated.

The Liberal Party said a decision was yet to be made.

"If an application is made by Mr Duluk to resume his membership, then the executive will consider the matter," state director Sascha Meldrum said in a statement.

"Steven Marshall is the leader of the Liberal Party and, as a member of the party's state executive, he cannot handball responsibility — this is very much a matter for him," Dr Close said.

"What more information does he need?"