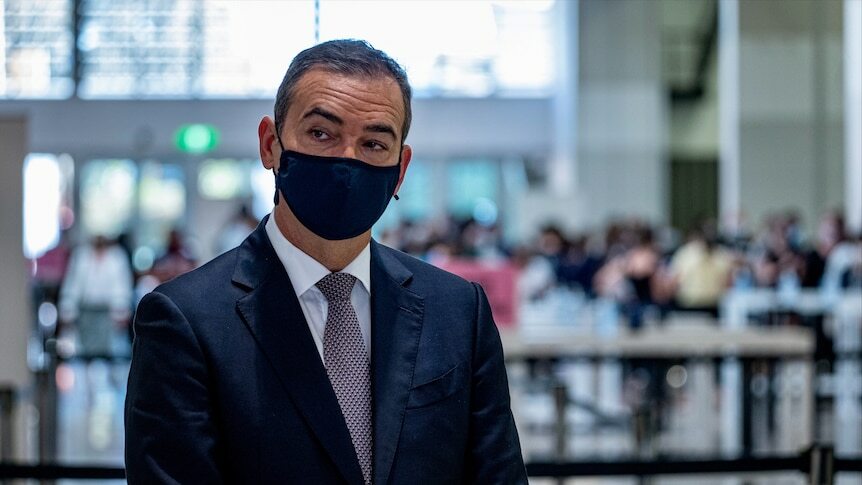 South Australia has recorded 4,506 new cases of COVID-19, with the number of people in hospital with the virus now sitting at 176.

A man in his 90s has died in aged care, while 18 people are in ICU and two are on ventilators, including one in a "critical condition".

Of the 176 people now in hospital, between 20 and 25 were admitted for "non-COVID" reasons.

Meanwhile, 336 of the state's new cases were picked up through privately administered rapid antigen tests lodged with SA Health for the first time.

Authorities confirmed that 23,478 PCR tests were performed on Saturday.

Presenting an update on South Australia's COVID-19 case numbers via social media from his home, Premier Steven Marshall said he, himself, had returned a negative PCR test result.

Mr Marshall had dinner with his adult daughter on Thursday, before on Saturday learning she had since tested positive.

The Premier said he would continue to isolate and work from home for seven days.

Mr Marshall said he was "very sad" to share the news of the elderly man's death.

"I certainly want to extend my condolences to his family," he said.

Mr Marshall said he wanted to thank South Australians for continuing to get tested.

"Yesterday, Victoria Park had its second highest day on record.

"We are still requiring a PCR test for all close contacts. We will be moving to the rapid antigen test from Thursday morning next week.

"There'll be no requirement [from Thursday] for people to have a PCR test to confirm a positive rapid antigen test."

Mr Marshall said there had been a "dip" in vaccination numbers in South Australia over the weekend.

He said 11,176 doses were administered on Saturday.

"We want to see these boosters right back up when we go back to the working week on Monday," he said.

Health Minister Stephen Wade said an additional 10,000 Pfizer vaccine doses would be made available to GPs and pharmacists in South Australia, to bolster the state's vaccine rollout for 5- to 11-year-olds.

A paediatric Pfizer dose is about a third of an adult dose, administered over two separate shots.

That age group will be eligible to receive the vaccine from Monday.

"What the clear message from GPs and pharmacists is, is that they've had a number of them have had deliveries below their expectations," Mr Wade said.

"So, they've got bookings for paediatric patients to have a dose, but don't have the vaccine dose to administer.

"We believe supporting them, by giving them access to some of the state supply, is a win, win."

There have been reports in recent days of parents struggling to secure an appointment for their child to receive a vaccine through their GP.

Opposition Leader Peter Malinauskas suggested vaccination clinics should be opened "urgently" in primary schools during the holidays, to ensure children can receive a first dose before school returns.

"School is back in a matter of a couple of weeks … and it seems extraordinary that the government doesn't have a COVID-ready plan for our schools, but there still seems to be an opportunity to use those sites as vaccination centres.

Mr Wade said the idea of using primary schools as paediatric vaccination hubs had not been "thought through", because additional dedicated hubs would take several weeks to set up.

The South Australian government is yet to confirm whether students will return to the classroom for the start of first term.

"We knew that COVID was going to get into our schools [and] planning should have been done well before the borders opened in November," Mr Malinauskas said.

"This is a degree of negligence on behalf of the Marshall Liberal government.

"Now the government is trying to run around and retrofit a solution."

His wife and three children have all since tested positive.