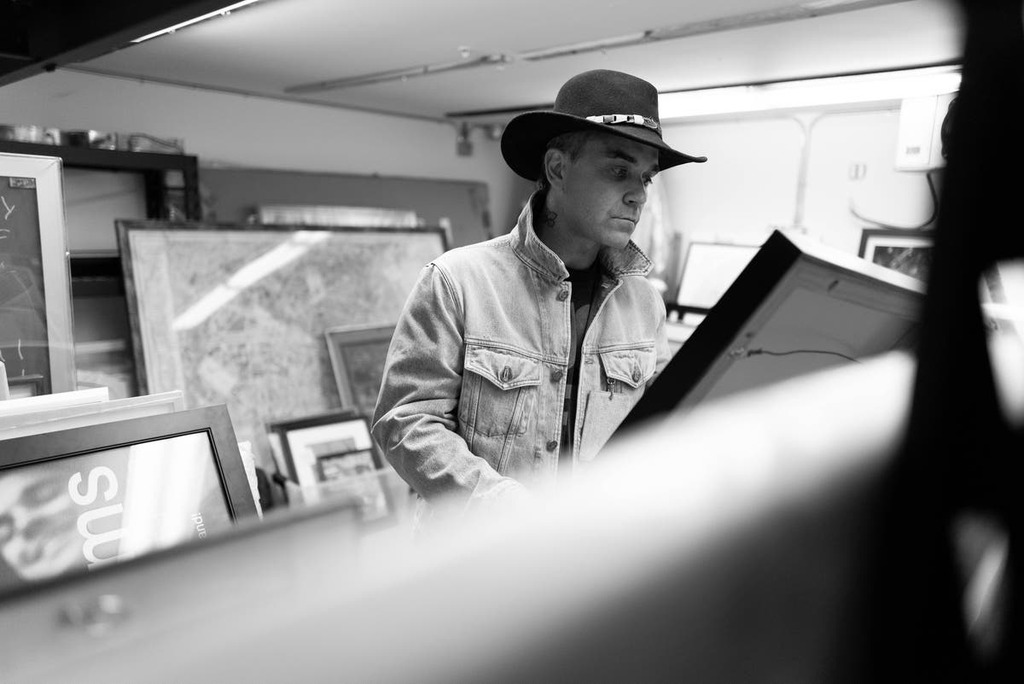 Robbie Williams names never-before-seen artwork after popular 80s’ female names
The Black And White Paintings will be unveiled for the first time on Friday.

Robbie Williams, 48, says ditching singing for painting has done wonders for his mental health as he revealed how taking…

The Guardian - UK
One subscription that gives you access to news from hundreds of sites
'Doctor Strange in the Multiverse of Madness' crew on bringing the story to life
Nine years since his most recent film and 15 since his last in the superhero genre, Marvel's "Doctor Strange in…

But for the next two weeks, these 14 artworks by the pop star Robbie Williams and his creative partner Ed Godrich will be on display at Sotheby’s in central London.

Their curious titles – all women’s names that were popular back when Williams was a Stoke-on-Trent schoolboy – are not the artworks’ only common factor. The large-scale black and white images, the fruits of a five-year collaboration, are strikingly thematic.

“Robbie and Ed refer to the paintings as a family of work,” said Hugo Cobb, a contemporary art specialist at Sotheby’s. “They are all created in the same visual language. But when you stand in front of them, you see they have a different character. Each picture definitely has a specific visual mood.

“Coherence, ambition and authenticity are the three things I think of when I stand in front of these works.”

Another painting from the same group, Beverly, was sold by Sotheby’s last month for £40,000 – double the top end of the pre-sale estimate – to a private foundation in Central America.

Williams said the pair were now “ready to share our creative vision with the world”. He wanted people to “feel a sense of positivity … to be intrigued, to feel curious, and spot new characteristics every time they look back at each painting.”

Using the moniker Williams Godrich, the collaborators painted the 14 works on huge polystyrene panels – a medium that gives them a “unique texture”, said Cobb – building up layers of detail.

“All the characters are in our head and come to life as the painting develops,” said Godrich. “Sometimes a character will emerge by mistake, or part of a figurine will happen by chance because of the direction of a particular brushstroke.

“Robbie might see something completely different when it’s his turn to draw; that’s why our work takes on multiple narratives. He’ll add a bit and I’ll add a bit until we end up with a completely unique being.”

According to Williams, the paintings’ titles came about because “we like the obscurity of these names which were highly popular back in the day but are not so common now. For us they are names that define the 1980s, an influential era which has inspired our art.”

In a Sotheby’s video, he said his interest in art had been sparked by album covers. “I didn’t realise they were art at the time, I was just intrigued by the images in front of me … So I guess my first love of art was through music.”

He and Godrich had formed an “art band”, he added. Art was “a great experiment for me to be creative in a different vehicle”.

Williams, who has amassed a huge fortune from record sales and concerts, has built up a personal art collection. This year he sold two works by Banksy for a total of £7m. The sales were intended to free up space to be able to buy “new art from new people” and help fund his own work, he said.

Cobb said the Williams Godrich debut was an exciting moment. “Robbie and Ed are very serious about this. This is not a one-off project – they’ve put a huge amount of energy and time into their work. As to their future collectability, it remains to be seen.”

• Black and White Paintings by Robbie Williams and Ed Godrich is at Sotheby’s, 35 New Bond Street, London W1S 2RP, until 25 May.

Robbie Williams names never-before-seen artwork after popular 80s’ female names
The Black And White Paintings will be unveiled for the first time on Friday.

Robbie Williams, 48, says ditching singing for painting has done wonders for his mental health as he revealed how taking…

The Guardian - UK
One subscription that gives you access to news from hundreds of sites
'Doctor Strange in the Multiverse of Madness' crew on bringing the story to life
Nine years since his most recent film and 15 since his last in the superhero genre, Marvel's "Doctor Strange in…