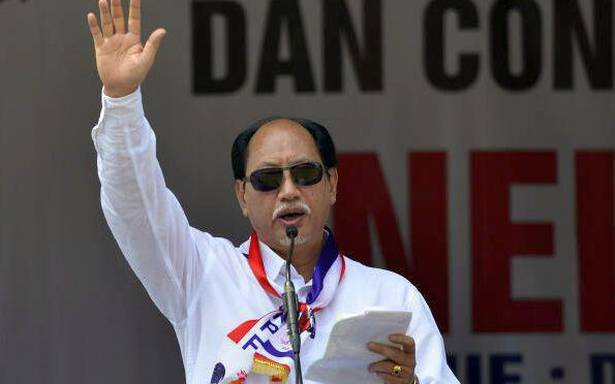 The Nagaland government has urged the Centre and the NSCN(IM) to sort out their differences and find a solution to the vexed Naga issue at the earliest, an official said on Monday.

“We met A. K. Mishra at Nagaland House and also interacted with NSCN(IM) representatives, including the group’s chief negotiator Th Muivah, its chairman Q Tuccu and vice-chairman Tongmat Wangnao, in Delhi,” the official said.

During the meetings held on Sunday, the State government appealed to Mishra and NSCM(IM) representatives to be more practical to bring a solution at the earliest as it has been the desire of the Naga people.

“We have to apply our mind and wisdom to bring a solution,” the State government delegation led by the CM told the outfit.

According to the official, the Nagaland legislators told the NSCN(IM) leaders that “there may be some differences between the group and the Centre over certain issues but it is time to sort out the issues to find a solution”.

Talks between the Centre and the NSCN(IM) to find a solution to the vexed Naga issue resumed on September 20, around two years after the deliberations stopped.

He asserted that “the State government, as a facilitator to the negotiation process, is extending all the support to the Centre and the outfit”.

The Central government and the NSCN(IM) had signed a Framework Agreement in 2015 in the presence of Prime Minister Narendra Modi.

It came after over 80 rounds of negotiations spanning 18 years, with the first breakthrough in 1997 when the ceasefire agreement was sealed after decades of insurgency in Nagaland which started soon after Independence in 1947.

The negotiations between the NSCN(IM) and the Centre had stopped following the former’s refusal to hold deliberations with previous interlocutor R. N. Ravi after the October 31, 2019 talks in Dimapur.