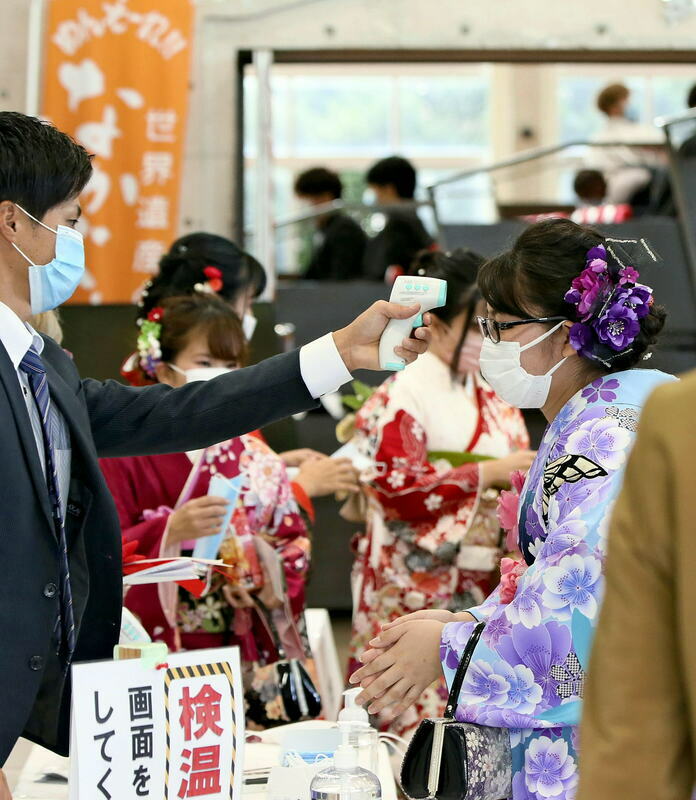 NAHA -- Many municipalities in Okinawa Prefecture, which is under quasi-emergency priority measures to curb novel coronavirus infections, canceled or postponed coming-of-age ceremonies Sunday, while some cities held events by taking strict infection-control measures, such as antigen tests.

The prefecture has started asking restaurants and bars to shorten business hours, and many streets were quiet and dark Sunday evening with no illumination from closed dining and drinking establishments.

In the village of Nakagusuku, about 100 of approximately 270 new adults attended a coming-of-age ceremony, according to the village. The attendance was about 20% fewer than an average year. This year's new adults comprise people who turned 20, or will turn 20, between April 2021 and the end of March this year.

The new adults had their temperatures taken by village staff at the entrance before walking by thermographic equipment. In addition, they donned masks for medical use provided by the village before attending the ceremony. Twelve people whose temperatures were 37 C or higher took an antigen test immediately and went to the ceremony only after testing negative.

"Since the infection spread so rapidly, I was concerned whether the ceremony would really be held. It's gone ahead and I could be reunited with friends thanks to the efforts by the people in the village," said a 20-year-old woman who was taking photos with friends outside the venue.

The woman said she goes to a vocational school for medical care in the prefecture, which asked her to take a PCR test after the ceremony.

"We can't stop the spread of infections if any one of us lets their guard down. I will thoroughly follow infection control measures from now on, too, as I think it's a responsibility of a new adult," she said.

In Yamaguchi Prefecture, where priority measures are also in place, coming-of-age ceremonies were postponed in Iwakuni and the town of Waki.