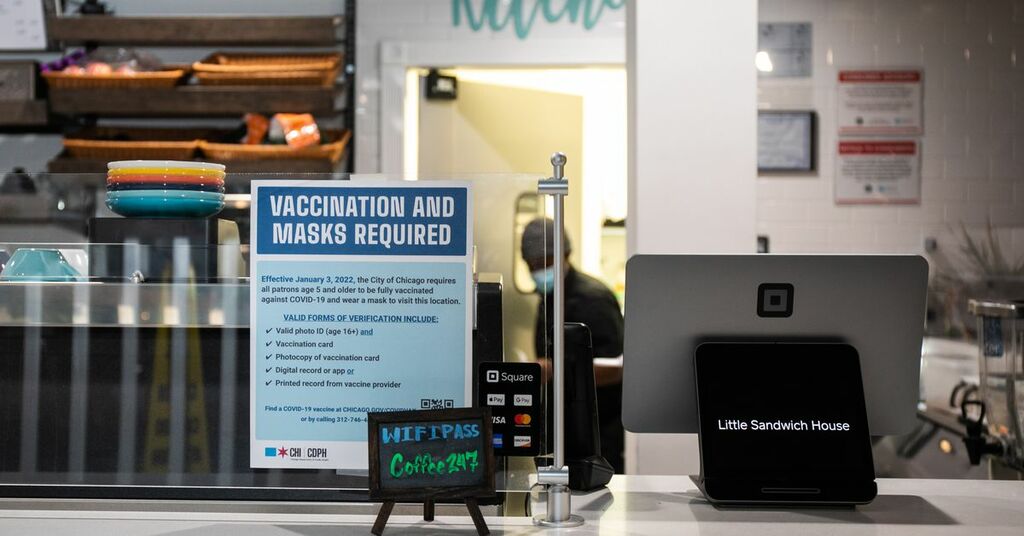 Less than a year after DeCarlo Pittman opened his Bronzeville cafe — his staff already scaled back — he now worries the citywide vaccination mandate may lead to confrontations between his remaining workers and his customers.

For a week, restaurants, bars and gyms in Chicago have been required to check customers’ vaccination status — as controversial as asking their political views, Pittman said, and he’s already noticing fewer first-time customers at his Little Sandwich House.

“I don’t think small businesses like myself should have to hire my staff to police their environment where they work,” Pittman said. “I just don’t think that’s fair. That’s an extra layer that they’re adding. And some people might not feel comfortable — I know I wouldn’t feel comfortable — possibly asking someone who walks in, ‘Hey, can I see your vaccination card?’”

Some neighborhood businesses on Chicago’s South and West sides are already seeing the policy hitting their bottom line. La Catedral Cafe and Restaurant in Little Village noticed a 50% decline in business within the first days of the mandate. The Lawndale Christian Fitness Center has fielded requests from people who want to cancel their memberships.

The change in policy comes as Chicago faces a record-breaking surge of COVID-19 cases tied to the Omicron variant. On Friday, there were 42,903 new cases in Illinois, according to health officials.

Overall, 73% of the city’s population that is older than 12 years old has completed their COVID-19 vaccine series, but fewer than 50% of residents in some communities on the South and West sides like Englewood and Austin are fully vaccinated, according to data from the city.

Ambrocio Gonzalez, owner and chef at La Catedral Cafe, hired two workers in preparation for the mandate. But his staff soon faced backlash from customers questioning why they needed to show a vaccination card at the restaurant when airports don’t ask for it. Others were wary of providing any form of identification.

The mandate also requires that businesses check a person’s identification card to see if it matches the vaccine card for those over age 16.

Some customers left while others ordered meals to go, he said.

While the requirements are better than a complete shutdown, Gonzalez said the changes are making this winter season for businesses even more difficult.

“If it stays like this, I’ll have to let go of more than two (workers),” Gonzalez said in Spanish. “It’s super slow and we will have to take measures, and unfortunately, the first is to cut the number of personnel.”

Gonzalez said he could look into opening up an outdoor patio that wouldn’t require proof of vaccination for customers, but the equipment to do so is costly and the city is facing dangerously frigid temperatures.

Pittman would have liked for city officials to consult with small businesses before issuing the mandate.

In Bronzeville, Trillis Rollins, the chef at Peach’s Restaurant, said the mandate is just the latest change the business has made during the pandemic. He hadn’t heard about any backlash from the new requirements to dine in, but he did notice the restaurant was getting more online to-go orders.

“It’s all about adjusting,” Rollins said. “I don’t think dining in will ever be like it was before.”

The restaurant didn’t have to hire additional staff to comply with the new city rules, but he did try to make sure all the workers knew about the mandate to avoid confusion with customers.

At the Lawndale Christian Fitness Center, Jarell Kelly, the fitness manager, said gym members have expressed frustration about the mandate, with some wanting to pause or even cancel their membership. It’s felt like the end of the year rather than the start of the year that would typically bring an influx of people, he said.

Still, the backlash hasn’t been as bad as they thought it would have been, with people still coming in during peak hours to work out, Kelly said.

“We are a tight-knit community, everyone knows each other,” he said. “It’s just a form of therapy for the community to be able to come to the gym that’s walking distance.”

The center has been trying to keep members by reducing fees, and they are brainstorming virtual live classes they can offer, Kelly said.

For Quentin Love, the transition to comply with the mandate wasn’t difficult because customers at his two boutique fitness centers — Bikettle — in the Hermosa and Chatham neighborhoods had long been vaccinated and discussed their status with each other.

“We still want to go to the gym,” Love said. “We come and put on the masks, we go get tested and we go get vaccinated and our booster shots. Even if that’s not what we want to do — I don’t think that everyone wants to do these things — we have to do these things as a culture to continue to live our lives.”

Elvia Malagón’s reporting on social justice and income inequality is made possible by a grant from The Chicago Community Trust.