Some are using a viral video to claim that Poland has condemned Australia's lockdowns. Here are the facts 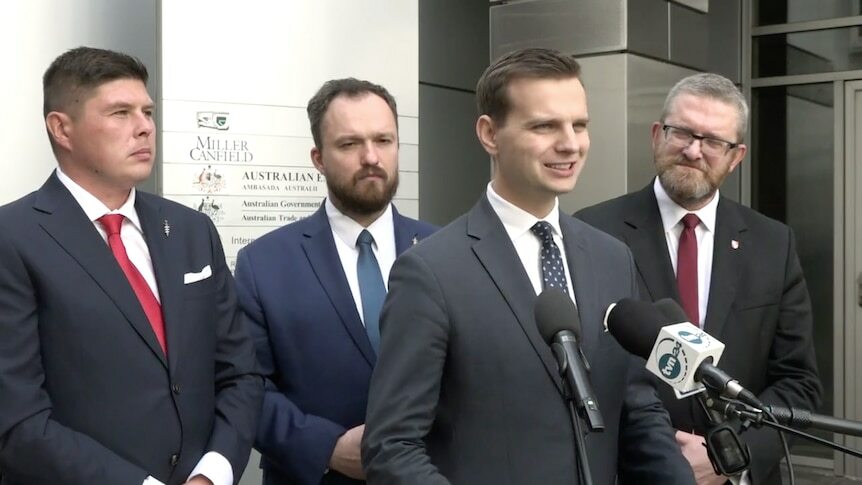 You can read the latest edition below, and subscribe to have the next newsletter delivered straight to your inbox.

In this week's edition of CoronaCheck, we investigate a video from Poland which supposedly shows government MPs condemning Australian COVID-19 lockdowns.

We also explain how unvaccinated people can put those who are vaccinated at risk, and fact check Scott Morrison on the rights of businesses to refuse service to people who haven't been immunised.

No, Poland has not condemned Australian lockdowns

A video purporting to show four Polish MPs "protesting" over Australia's COVID-19 restrictions has gone viral, with anti-vaccination and anti-lockdown activists lauding the group for condemning the actions of Australian authorities.

"Poland stands with the Aussies", states one widely shared tweet from what appears to be a Melbourne-based account.

"Polish MPs stand outside the Australian Embassy in Poland. Calling our current Govt Covid Response nothing short of a Dictatorship. I'd say they'd be correct."

Shot on September 28, the video has been shared in Australia along with English subtitles. It shows four men standing in front of the Warsaw embassy as they label Australia's COVID-19 restrictions and the police response to protests in Melbourne as "totalitarianism".

Meanwhile, in a video shared to Facebook, an Australian blogger suggested the group constituted "an official international body" which had "condemned the breaches of human rights and civil rights in Australia".

RMIT ABC Fact Check collaborated with fact checkers in Poland who confirmed that the English captions accompanying the video were mostly accurate.

According to the men in the video, who refer to the "People's Republic of Melbourne", Polish citizens living in the locked-down Victorian capital are refugees who should be evacuated with the help of the Polish government.

The group claimed to be highlighting the situation so that it was not repeated in Poland and questioned why protests in Australia were not drawing global attention similar to that which accompanied the Black Lives Matter protests of 2020.

But the men in the footage, members of the Polish far-right political party Konfederacja (the Confederation of Liberty and Independence), do not represent the Polish government, which has not issued any official statement on Australian lockdowns.

Indeed, two of the men in the video, while members of Konfederacja, are not elected MPs.

Moreover, Konfederacja, and at least one of the politicians featured in the video, have a history of sharing COVID-19 conspiracy theories and misinformation.

According to Polish fact-checking organisation Demagog, the official Konfederacja Facebook page in September posted misinformation about COVID-19 vaccines in Israel.

Grzegorz Braun, the fourth man to speak in the video and an elected member of the lower house of the Polish Parliament (Konfederacja holds 11 of the 460 seats), was reportedly booted from a recent parliamentary sitting for refusing to wear a mask.

UK-based website Notes from Poland, which was established by the director of the Polish Studies Program at the University of Cambridge, Stanley Bill, also reported that Mr Braun had previously "likened the compulsory wearing of masks to how the Nazis forced Jews to wear armbands as a first step on the way to ghettoisation and then death".

In 2020, meanwhile, a foundation established by Mr Braun published ‘A False Pandemic', a book collating alternative views about the COVID-19 pandemic, which Polish fact checkers told Fact Check was "anti-vax".

Do unvaccinated people pose a risk to those who are vaccinated?

While Australia's agreed path to reopening hinges on a significant majority of the population being fully vaccinated, some have argued that the decision to refuse the jab has little impact on the health of the wider community.

Take, for example, the view of the Fair Work Australia deputy president Lyndall Dean who, in a dissenting opinion in a recent case involving a worker sacked for refusing the flu vaccine, wrote:

"There is no risk associated with a person who is unvaccinated and does not have COVID, notwithstanding the misleading statements by politicians that the unvaccinated are a significant threat to the vaccinated, supposedly justifying ‘locking out the unvaccinated from society' and denying them the ability to work."

But are unvaccinated people really only putting themselves at risk? Here's what the experts have said.

According to David Dowdy, an epidemiologist at Johns Hopkins University, even when vaccines were highly effective, they were not perfect.

"Whenever transmission rates go up, therefore, the risk goes up for everyone, Dr Dowdy explained to factcheck.org.

"Both causes of severe bodily harm are largely preventable — COVID-19 through vaccination, and drunken driving by not driving after drinking alcohol," the professors wrote.

"Both are individual decisions with societal consequences."

According to Professors Wen and Wang, vaccinations acted like seatbelts: while they significantly reduced an individual's chance of injury and death, the risks remained if every driver around them was intoxicated (that is, unvaccinated).

"No vaccine is 100 per cent effective, and the more virus is around us — in this case, carried by the unvaccinated, who are five times more likely to be infected and thus to spread coronavirus — the more likely the vaccinated are to become infected."

Children too young to be vaccinated, along with the "medically frail" (who could be at risk of serious illness in the event of contracting a mild illness, despite being fully vaccinated) should also be considered, the professors added.

Scott Morrison says businesses can refuse entry to unvaccinated patrons without falling foul of discrimination laws. Is that correct?

As the vaccine rollout continues to accelerate, some businesses are making decisions about whether to open their doors to those who have not been vaccinated against COVID-19.

Speaking to Melbourne radio host Neil Mitchell, Prime Minister Scott Morrison said that businesses had the "right to say who can come into their premises".

"That's what the law says. And that doesn't fall foul of discrimination laws."

Fact Check this week found that claim to be not the full story.

Experts told Fact Check that businesses had the right to set conditions of entry to their premises, including a requirement to be vaccinated.

It was also correct that an unvaccinated person would not be directly protected under discrimination laws at a Commonwealth, state or territory level.

They added, however, that there was a potential for instances of unlawful indirect discrimination should businesses impose a blanket ban and fail to provide exceptions to those who were unable to be vaccinated on medical or age-based eligibility grounds, or those who had not yet had access to the vaccine.

With US residents aged 65 and over now eligible for COVID-19 booster shots, provided that their initial two doses were received more than six months ago, 78-year-old President Joe Biden recently rolled up his sleeve to take part in the booster program.

Subsequent news footage raised eyebrows when it became evident that the White House "setting" for the event was actually a stage featuring artificial windows and a fake view.

According to fact checkers, however, claims that the set was created specifically for the booster shot photo-op were incorrect, as were suggestions that the injection itself was faked.

"The backdrop behind Biden as he was getting his booster shot wasn't ‘created' for that event — it had been used five days earlier for a global coronavirus summit."

The fact checkers added that there was no indication that the Biden administration had at any point tried to pass the event off as being held in the White House itself.

Fact checkers at Snopes, meanwhile, concluded that "visual evidence showed a needle going into the president's arm" while the White House had confirmed that "the syringe contained the Pfizer booster vaccination to fight COVID-19".

In other news: No, the US military did not cause the Facebook outage

A widespread technical problem saw Facebook, Instagram and WhatsApp out of service for around six hours earlier this week, but claims that the US military took down the tech giant are baseless, fact checkers at Lead Stories found.

According to one TikTok video posted during the outage, the US military had supposedly entered Facebook's Californian headquarters to "take all their servers".

But the fact that the affected apps were now back up and running was proof that Facebook's servers were still in place, Lead Stories pointed out.

Facebook, meanwhile, issued a statement explaining the outage was caused by "configuration changes on the backbone routers that coordinate network traffic" between the company's data centres.

"This disruption to network traffic had a cascading effect on the way our data centers communicate, bringing our services to a halt," Facebook's engineering team reported.

"We want to make clear that there was no malicious activity behind this outage — its root cause was a faulty configuration change on our end. We also have no evidence that user data was compromised as a result of this downtime."

Edited by Ellen McCutchan, with thanks to Joseph Misuraca

Got a fact that needs checking? Tweet us @ABCFactCheck or send us an email at factcheck@rmit.edu.au