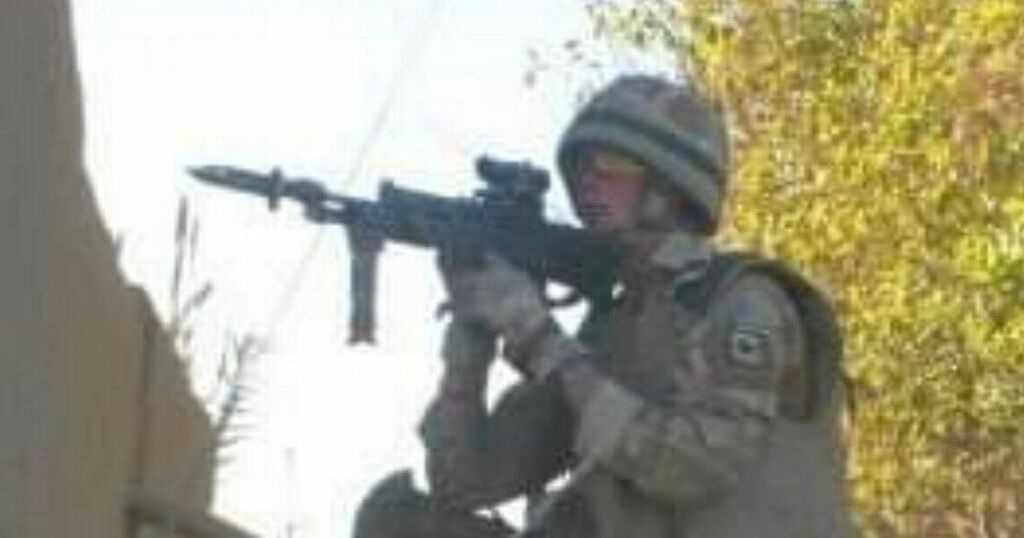 A soldier whose leg was shattered after an explosion in Afghanistan is looking forward to finally being able to walk his bride down the aisle.

Ben Bainbridge, now 30, was just 18 when an IED was detonated next to him while on tour.

He was left with such severe injuries that he had only two pints of blood left when specialist medics came to save him.

After surviving the ordeal, he was left with severe nerve damage to his left leg.

With his foot paralysed, he struggled to walk and often stumbled or tripped over, Manchester Evening News reports.

But a new customised leg brace funded by Help for Heroes has helped him get back on his feet.

And now that he is walking, Ben plans to escort his fiancée Steph Dunn, 31, down the aisle on their wedding day in January.

It will be a celebration for the couple - from Beverley, Yorkshire - of their vows and an important milestone in Ben’s recovery.

Within a year of joining the Army, Ben was deployed to Afghanistan with the 2nd Battalion of the Yorkshire Regiment to fight the Taliban.

During one gun battle, the infantry soldier took cover in a ditch and returned fire until Ben and his troops prepared to move but then the hidden bomb next to him was detonated by a remote device.

The full impact shattered his left leg, hit the main artery in his groin and punctured his right lung.

His squadron looked after him for an agonising 21 minutes until specialist medics arrived by helicopter, by which time, he had only two pints of blood left in his body.

Ben said: “I know I could easily have been killed by the blast or from losing so much blood, the surgeons have said I was a fighter and I had youth on my side.”

After being put into an induced coma and stabilised, Ben was transferred back to the UK and spent two years at the military’s Headley Court rehabilitation centre and, despite aiming to continue his career in the Army, he was medically discharged in 2013.

The sciatic nerve damage to his left leg has caused “foot drop” and the daily chronic pain varies from numbness to pins and needles or a burning sensation.

“It has been tough, there are a lot of things I struggle to do, like being able go on a long walk with our dog,” said Ben.

“I would love for us to be able to go out and enjoy a proper family day out with our girls, Ellie, 11 and Ariel, seven, and go ice-skating or rock climbing.

“I really wanted to go back into the Army as my career had not been long enough. When you leave the military, you feel like you are just a number to them so when I was medically discharged I got depressed as I felt alone and future looked bleak.”

Ben’s fiancée Steph reached out to Help for Heroes and he was assessed by Duane “Fletch” Fletcher, Veterans’ Clinical Advisor, who spent 39 years serving in the military as a registered nurse and a nursing officer and was made an MBE after helping to develop the first fully-functional Afghan-run trauma centre in Helmand province.

Fletch accompanied Steph and Ben to his hospital appointment when he had a customised leg brace with a spring fitted, which successfully holds his foot in position.

Ben said: “Usually my ankle is hypersensitive but this leg brace feels comfortable as it fits on the outside of my shoes and goes up to my calf so stops my foot from flopping.

“I’m not ashamed of my foot but I’m looking forward to walking up the aisle and having people stare at me for the right reasons.”

The marriage proposal was a total surprise for Steph when it happened on Mother’s Day in March this year, a mission that the couple’s pets were instrumental in carrying out.

She burst into tears after instantly saying “Yes!” to the cards that Ben had tied to each of their Jack Russell dogs’ collars – Molly’s read “Will You?” and Rex’s read “Marry Me?”

Steph said: “When he stood up and walked for the first time in the new leg brace, I cried, it felt so amazing. It was overwhelming because just being able to walk has been a daily struggle for him for 11 years.

“Help for Heroes has been there for both of us, I’m now in touch with other people whose partners have been injured so neither of us feels so alone anymore. It’s never too late.”