The ballot, the fourth in as many years, failed to draw a line under months of parliamentary deadlock following an inconclusive April poll which Sanchez won but left him unable to form a government.

The Socialist leader, who had called the vote to strengthen his hand, ended up losing three seats in a poll that weakened his potential allies and strengthened the right.

The campaign has been overshadowed by the Catalan separatist crisis that has played squarely into the hands of the far right which over the past year has made significant inroads into Spain's political arena.

Announced some four hours after polling stations closed, the final results showed the Socialists taking 120 of the parliament's 350 seats (28 percent of the votes) while Vox secured 52 (15 percent) -- more than double its mandates in the outgoing assembly.

Vox only made its parliamentary debut in April when it won 24 mandates in the biggest showing by the far-right since Spain returned to democracy after dictator Francisco Franco's death in 1975.

In second place was the rightwing Popular Party, which took 88 mandates (nearly 21 percent), up from 66 in the previous poll.

"The results will make forming a government more difficult due to the parliament's deep fragmentation and the rise of Vox," he said, warning that the divisions "were so problematic" that it was impossible to rule out yet another election.

In recent days, Sanchez had repeatedly raised the alarm about Vox's "aggressive ultra-rightwing" policies, warning the party would drag the country back to the dark days of Franco's dictatorship.

But his warnings appeared to have fallen on deaf ears.

But in Spain, the reaction was one of shock, with the outcome swiftly denounced by Pablo Iglesias, leader of the radical leftwing Podemos who spent months locked in talks with Sanchez's Socialists that failed to end the deadlock.

"These elections have allowed the right to grow stronger and now we have an extreme right which is among the most powerful and strong in Europe," said Iglesias whose party also suffered a slide, dropping to 35 seats from 42 in April.

The campaign took place on the heels of fresh unrest in Catalonia after Spain's top court sentenced nine separatist leaders to lengthy jail terms over their role in a failed 2017 independence bid.

The October 14 ruling triggered days of mass protests which by night descended into chaos, with demonstrators torching barricades and hurling rocks and Molotov cocktails at police who hit back with water cannon, tear gas and foam bullets.

But as the party's profile has risen, it has faced growing criticism, with 3,000 academics and researchers denouncing it for a "calculated, systemic and recurrent" use of "falsified and manipulated data" to advance an ideological agenda of extreme nationalism.

Spain has been mired in political paralysis for four years since Podemos and business-friendly Ciudadanos entered parliament following a December 2015 election that shattered the decades-long hegemony of the Socialists and the PP.

With no single party able to secure the required 176 seats for a majority, the Socialists are likely to opt for a minority government.

But Oriol Bartomeus of Barcelona's Autonomous University said the next few weeks would prove tricky.

"It won't be easy to break the blockage but right now, nobody wants to even consider the possibility of repeating the elections for a third time," he told AFP. 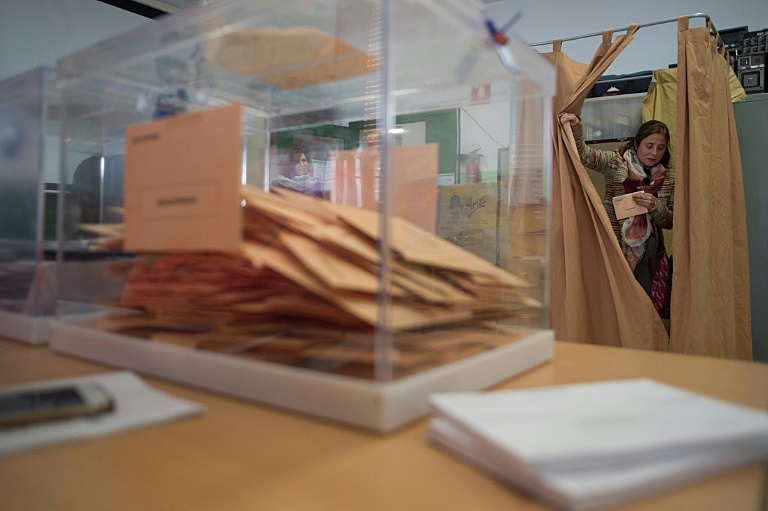 AFP
One subscription that gives you access to news from hundreds of sites
Spain election: grand coalition ruled out as far-right Vox surges

The election results have deepened the political blockade in Spain and the only clear winner is the far-right party Vox,…

It's Spain's fourth election in as many years.

Madrid (AFP) - Voting drew to a close in Spain's fourth general election in as many years on Sunday, with…