Socialists in lead as far-right Vox surges in Spain election

Madrid (AFP) - Spanish Prime Minister Pedro Sanchez's Socialists were on track to win Sunday's repeat election as first results confirmed a surge in support for the far-right Vox party, which was seen coming third with three-quarters of the votes counted.

Partial results showed the Socialists winning 122 of the parliament's 350 seats with around 28.5 percent of votes cast, while Vox had 53 seats, more than double the number the party had in the outgoing assembly.

Spain's fourth election in as many years has been overshadowed by the ongoing Catalan separatist crisis which has cranked up support for Vox.

The party only made parliamentary debut in April when it won 24 mandates in the biggest showing by the far-right since Spain returned to democracy after dictator Francisco Franco's death in 1975.

The results also showed the rightwing Popular Party coming second with 84, up from 66 in the previous poll.

In recent days, Sanchez has repeatedly raised the alarm about Vox's "aggressive ultra-rightwing" policies, warning the party would drag the country back to the dark days of Franco's dictatorship.

The last election produced a near-record 76 percent turnout, which helped Sanchez who had mobilised left-leaning voters to oppose Vox.

But by 6:00 pm (1700 GMT) turnout stood at 56.9 percent, nearly four percentage points lower than at the same hour in the April ballot.

The campaign took place on the heels of a fresh unrest in Catalonia after Spain's Supreme Court sentenced nine Catalan leaders to lengthy jail terms over their role in a failed 2017 independence bid.

The October 14 ruling triggered days of mass protests in Barcelona and other Catalan cities, which by night descended into chaos, with demonstrators torching barricades and hurling rocks and Molotov cocktails at police who hit back with water canon, tear gas and foam bullets.

More than 600 people were injured, around half of them police.

At his final rally on Friday, Abascal -- who wants all separatist parties banned -- said "drastic solutions" were needed as his supporters chanted: "Torra to the dungeon!"

With his rallying cry of "Spaniards first" and rage against those who would betray the unity of Spain, Abascal has capitalised on the crisis, leading to a surge in support for his far-right faction.

Lidia Lopez, a 21-year-old trainee journalist who lives in the same Madrid neighbourhood as Abascal, said he had benefitted from the spotlight of televised debates.

"He gets visibility through election debates but the problem is that he uses falsehoods and nobody checks in real-time to see if what he's saying is true or not, so people hear it and believe it is true," she said after casting her ballot for the radical left Podemos.

The party has repeatedly come under fire over false campaign claims, with 3,000 academics and researchers denouncing Vox for its "calculated, systemic and recurrent" use of "falsified and manipulated data".

Spain has been mired in political paralysis for four years since Podemos and business-friendly Ciudadanos entered parliament following a December 2015 election that shattered the decades-long hegemony of the Socialists and conservative Popular Party (PP).

And there is there is a good risk Sunday's vote will only prolong the agony in the eurozone's fourth-largest economy.

With no single party able to secure the required 176 seats for a majority, the Socialists are likely to opt for a minority government -- but that would only work if the PP abstained in an investiture vote, said Teneo analyst Antonio Barroso.

"If confirmed, Vox's rise creates a serious dilemma for PP: facilitate a Socialist-led government, which would leave the centre-right party vulnerable to Vox's attacks, or going to another election with Vox on the rise," he tweeted.

"Government formation is going to take time (again), and Spain might go into the Christmas break without a government." 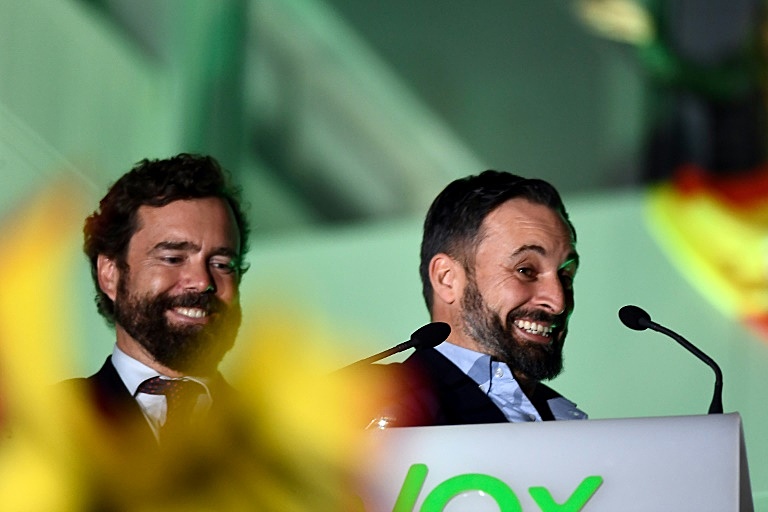 AFP
One subscription that gives you access to news from hundreds of sites
Spain election: grand coalition ruled out as far-right Vox surges

The election results have deepened the political blockade in Spain and the only clear winner is the far-right party Vox,…

Evening Standard
One subscription that gives you access to news from hundreds of sites
Spain election: Far right doubles its seats as poll fails to break deadlock