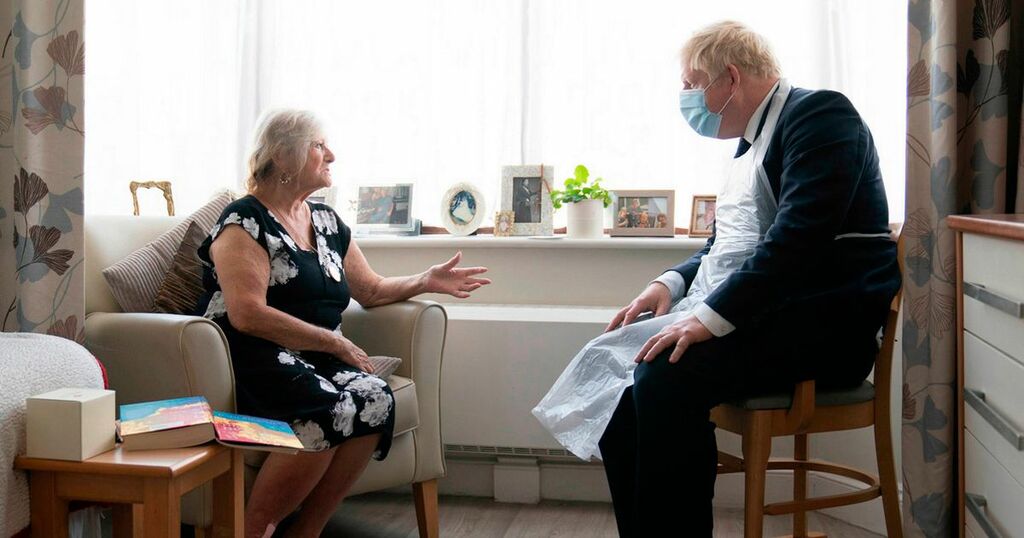 The Prime Minister vowed to end the injustice of people facing an endless spiral of costs until their destitution or death.

But since then it’s emerged the policy is riddled with holes. And it’s being funded by a tax hike almost entirely on working-age people.

At the moment, everyone must pay for all their care until their total assets (often including their home) drain away to £23,250.

Under the new system, a plug will eventually be put in this drain - as no one will pay more than £86,000 over their lifetime for care.

However, there are big problems - and National Insurance is rising from 12% to 13.25% to pay for it.

Here are 10 nasties hidden in the small print.

Young Brits will pay £12,600 more over their lifetime

Young Brits will pay an extra £12,600 over their lives to fund the Tories’ social care overhaul.

Analysis by the Resolution Foundation found raising National Insurance from 12% to 13.25% will cost a typical 25-year-old the amount between April 2022 and when they retire.

National Insurance is paid by all working-age people on income over £9,568 per year.

That means the rise will hit many low-income Brits who have already been affected by the £20-a-week Universal Credit cut.

Graduates face a tax rate of 42% on their pay rises

The extra levy creates the highest tax burden for decades on working-age Brits.

And graduates will be particularly hard-hit, because they’re also repaying a student loan.

Analysis by the FT suggested graduates on £30k who earn a £1,000 pay rise next year will not see 42% of it - even though their income tax rate is technically 20%.

… And it still probably won’t be enough

The reason for the tax rise is to pump £12bn a year into ailing health and care.

But just £5.4bn of £36bn is going on social care in the first three years - and much of that is swallowed by paying for the new cap and floor.

Health Secretary Sajid Javid has refused to say how much of the £12bn-a-year might go on social care in the future, and he already faces warnings he’ll have to dig deeper.

Care cap architect Sir Andrew Dilnot told Times Radio: “There's every chance that the overall needs of the NHS and social care will stretch the extra money that's been raised.

“The government may find that it needs to raise more money or borrow more in three or four years time than it is for the delivery of those social care promises.”

“That suggests little or no long-term additional costs as a result of the pandemic. History suggests these plans will be topped up further”.

Just 17% of pensioner families will pay the tax

From April 2023, the NI rise will be changed into a 1.25% “levy” and extended to include working pensioners, who currently don’t pay NI even if they are in a job.

But according to the Resolution Foundation, only 17% of pensioner families are in that position.

By comparison, 65% of pensioner families receive some kind of private pension income that won’t be covered by the tax hike.

And many landlords won’t have to pay a penny

Landlords have been “unjustifiably exempt” from the tax hike, according to the Resolution Foundation.

Some 67% of the 1.9million adults who own buy-to-let homes are in the richest fifth of families.

Keir Starmer said: “The Prime Minister’s plan is to impose unfair taxes on working people; my plan is to ensure those with the broadest shoulders pay their fair share.”

Labour ’s leader has not spelt out precise details of what he would do instead.

A change to the rules could lead to care firms collapsing

Deep in the text of the care plan is a change with seismic proportions.

The government is pledging to let “self-funders”, who pay privately for their own care, let their council arrange care for them instead at a cheaper price.

That’s great for self-funders. But there’s a big problem. For years, councils have essentially undercut the industry so it’s propped up by private funders.

There is a fear that if rates come down to council levels for everyone, firms will collapse - and care staff certainly won’t get a well-earned pay rise.

Health Secretary Sajid Javid said: “Frankly local authorities haven’t had the funding they need to pay the full cost of care. There’s been a cross-subsidisation in the sector from people who are paying privately and that needs to end.”

The County Councils Network warned there is a fee gap of £670m in England’s counties alone. And the Reform think tank warned “the viability of the sector” could be hit without “serious additional funding”.

Elderly care residents will spend a lot more than the £86,000 cap

Whichever way you look at it, people in England will spend over the £86,000 cap.

If they’re paying now, it’ll be a LOT more, because only contributions they make after October 2023 start counting towards the £86k limit.

Even if they start care after October 2023, the £86k only covers care costs - not food or board.

Sajid Javid insisted “that’s not small print”, adding: “It wouldn’t be fair to say you should include your food costs or your accommodation costs.

“Whether we need care or not, we all have to eat and we all need to have a roof over our heads…

But it means families will have to budget very carefully, and for more than £86,000.

The £86k cap in England is set to benefit southerners more than northerners.

The Resolution Foundation said this is for two reasons.

First, southerners' homes are generally worth more, so they benefit more by having payments limited to £86,000 because they otherwise had more to lose.

By comparison, a northerner in a £110,000 house and no savings could eventually have to spend £86,000 of the value of that house, leaving little choice but to sell.

Secondly, care is more expensive in southern parts of England - meaning southerners hit the cap more quickly, and therefore a higher proportion of southerners benefit from the cap being there.

People could have to get private insurance…

No10 suggested people could potentially take out private insurance to safeguard their homes against £86,000 of care spending under the new cap.

The PM’s spokesman said: “It is for the private insurance market... (it) will now have the ability because of the certainty we have provided to come forward.

“It’s not for me to say what actions they will take now.”

He avoided saying if No10 was urging people to take out private insurance. But a cynic might say the government may be hoping a market springs up to fill the gaps in its own policy.

… Or sell their homes

The 2019 Tory manifesto vowed to "guarantee" no one would have to sell their home to pay for care.

But the policy breaks that pledge, only promising people won’t have to sell up before they die.

People can defer care payments to avoid selling until after death. But that’s not new, it exists now.

Health Secretary Sajid Javid and Boris Johnson both refused to repeat the 2019 guarantee.

Instead Mr Javid insisted: “We will also make sure everyone is able to access the deferred payment agreement so no one would ever have to sell their house in their lifetime.”

But Labour MP Clive Efford said: “£86,000 is a Kensington cap. Outside of London, in many areas, the cap is far too high and would lead to people losing their homes."

And Tory Sir Roger Gale told Times Radio the claim was “smoke and mirrors”, adding: “All that's covered by this is the care costs and you have to have a lot of care costs to really reach £86,000.”