Slow progress in Rapu-Rapu mine rehabilitation 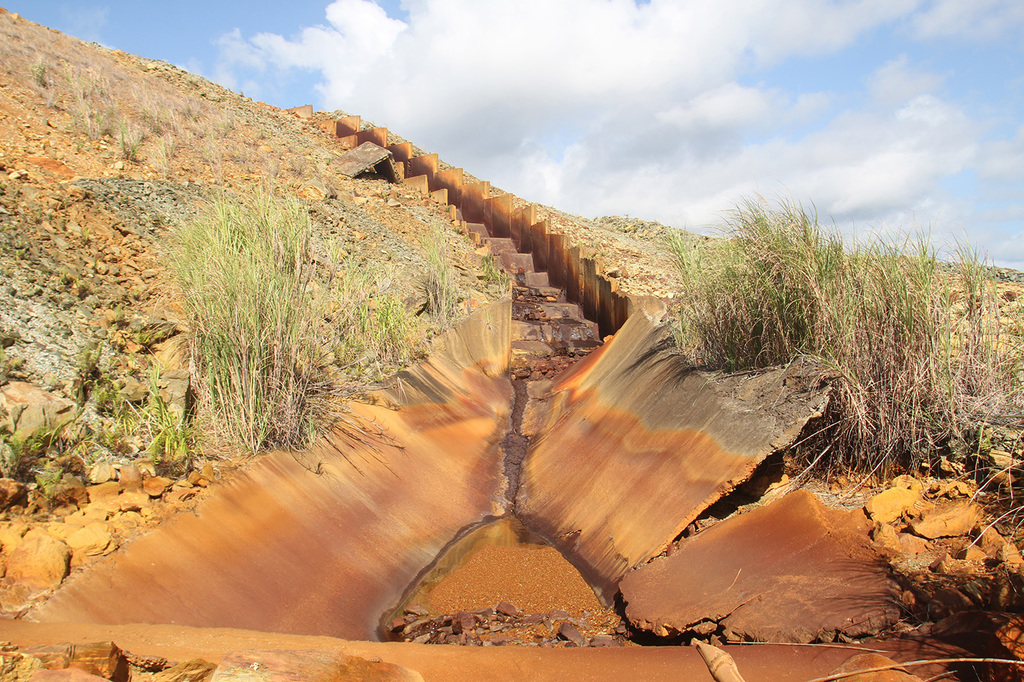 ALBAY, Philippines – Patches of cogon grass broke the vast expanse of yellowish earth sorrounding an open pit mine in Rapu-Rapu Island, proof of the grass' resilience to  highly acidic soil.

Cogon grass was planted using hydroseeder in about 3 hectares of the total 100 hectares of land to be rehabilitated in the town that experienced toxic mine spills in 2005. This was an experiment undertaken when trees didn’t survive the acidic land, said engineer Melvin Alonzo, representative of the Korean mining firm operating in Rapu-Rapu town.

The cogon grass seem to represent the slow progress of the work, as well as the challenges ahead. The grass planted on the eastern side of the open pit grew despite the acidic soil but much of the grass on the northern side – where the toxic spills occurred – withered.

There were two separate mine spills in Rapu-Rapu in 2005, considered as among the worst mining disasters in the Philippines. Rehabilitation work on the mine site started in 2013, and has supposedly cost P178 million, so far.

Controversy is also brewing over the alleged unauthorized withdrawal of P125 million from funds set aside for the rehabilitation plan that keeps getting revised. The Mines and Geosciences Bureau (MGB) central office is investigating this.

In 2005, the gold mining operations of Lafayette Philippines Inc (LPI), a subsidiary of an Australian mining company, released cyanide that poisoned the earth and the sea. It caused massive fish kills that  affects the livelihood of coastal communities in Albay and Sorsogon to this day. (READ: Fishermen in Rapu-Rapu face bleak future due to mining woes)

Ironically, Lafayette, the first mining company allowed by the Philippine government to operate following the enactment of the Philippine Mining Act of 1995, was envisioned to be the model of responsible and sustainable mining.

Former production lead operator Domingo Nivero, 62, said the “Australian big bosses” were to blame. He said they proceeded with the mining operations despite concerns raised by Filipino mining engineers due to the ill-equipped tailings dam for toxic chemicals.

Lafayette attempted but failed to save its operations, even at one point hiring new management led by Carlos Dominguez III, who is now finance secretary, to improve the mine project.

In 2008, the joint venture of LG International and Korean Resources Corporation took over the mining operations after absorbing the shares and debt of Lafayette. It also invited Malaysia Smelting Corporation to invest.

Alonzo said the management has been complying with the rehabilitation plan but it is proving unsuccessful, so far. He is president of the the Rapu-Rapu Mineral Incorporated (RRMI) and Rapu-Rapu Processing Incorporated (RRPI).

“Rapu-Rapu is unique because of almost 11 months of bad weather with an acidic environment,” Alonzo said.

The rehabilitation work had been put on hold for the last two years, pending revisions in the plan. About 30% of the work in the original plan had been completed, based on a monitoring report in 2016.

This reporter gained rare access to the site through MGB regional director Guillermo Molina. He coordinated with the Korean mining firm, which provided a local guide and arranged the 4-hour boat ride from the Legazpi City seaport to the island.

The company allowed photographs to be taken at the open pit areas and the mined out earth, but not the adjoining mine processing plant located on top of the mountain.

Alonzo claimed the rainwater was acidic but not toxic. Lime carbonate was used to control the acidity of the earth, he said, adding that this was approved by the Department of Environment and Natural Resources (DENR).

There were pipelines or tunnel drain sections put up within the tailings dam to allow rainwater to flow down to a water treatment facility. Alonzo said the waste water is pumped out with a discharge permit from the Environmental Management Bureau (EMB).

The roads, either corroded or unpaved, showed traces of water pathways from the mountain emptying into the Pacific Ocean.

Before the rehabilitation project was halted two years ago, the running tab was at P178 million, according to a 2015 audit report. The government is raising questions about this.

Molina urged the mining firm to return the P125 million that was allegedly withdrawn without proper authorization during his predecessor's term.

Alonzo said the money was already spent in rehabilitation works, although he said the company might be able to return P56 million.

Alonzo said the money was spent on backfilling of the lower tailings storage facility with rocks, boulders, clay, and soil materials. Island residents were also hired to grow various grass and flowering plant species on its embankment – creeping daisies, signalgrass, and Calopogonium or flowering legumes – but plants had low survival rates due to the weather conditions.

He said equipment were procured such as backhoes, dump trucks, and bulldozers, among others; while facilities were dismantled, including a power plant.

Galicia accused the Korean mining firm of keeping local officials in the dark about the rehabilitation plan. He got to visit the tightly guarded mining site only about two years ago.

He was concerned about the mining firm's blasting operations in the mountains, which were done without coordination with his office and had triggered apprehension among residents.  Galicia wasn't part of the provincial government delegation that visited the mine site last year.

Besides, Galicia said, the revenue the town receives from the mining operations was just chump change.

“We’re clueless about what’s really happening in the mining site as they conducted blasting [operations] before without informing us. That’s why I visited the mining site once and complained before the House of Representative against such practices,” he said.