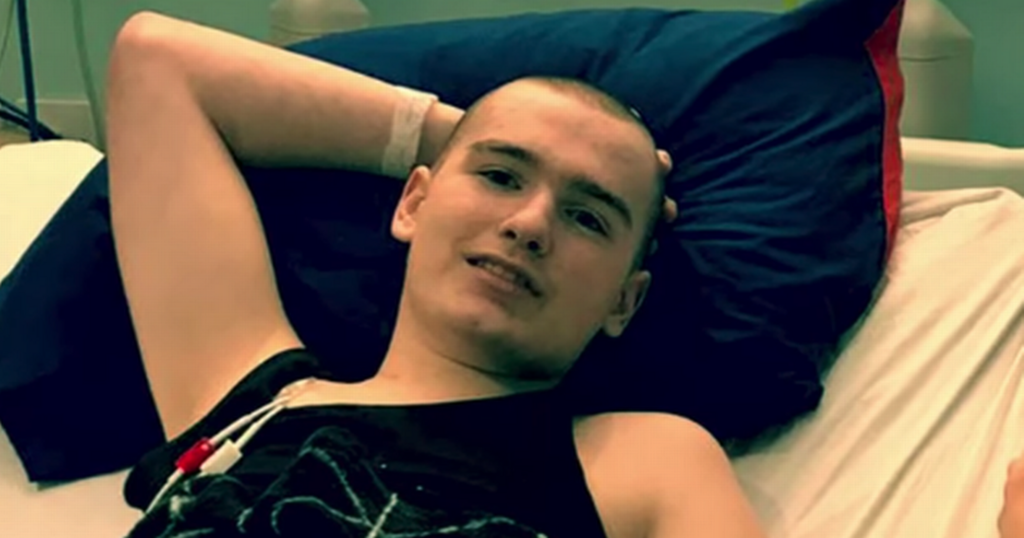 A Scottish teenager who suffered from back pains is battling cancer after a sledge fall prompted him to visit the doctors.

Aidan Hogg, 16, began experiencing back pain following a fall off a sledge in February 2021.

The schoolboy from Edinburgh was just 15 when his lower back started aching, and after doing a urine test, doctors prescribed antibiotics for a misdiagnosed kidney infection.

However, not long after, Aidan lost all feeling within his legs, and unable to stand or walk alone - he was rushed to a hospital where MRI tests revealed cancerous tumours on his spinal cord.

Now eleven months on, Aidan is in remission and learning how to walk again.

Aidan said: "We'd had some snow, and I enjoyed myself going out sledging.

"It had been icy and foggy, so I ended up coming off the sledge.

"Not long after, I started getting pains in my lower back so I assumed it was from the fall.

"It didn't go away so I went to the doctors who gave me antibiotics for a kidney infection, they never really helped, or made much of a difference."

Aidan's health took a turn for the worse on March 4 2021, when he lost the ability to walk and all feeling within his legs.

He said: "I was struggling to sleep and was awake till 4am, I sat on the edge of my bed, and when I tried to swing my legs back, I couldn't.

"I had to grab them with my arms and lift them into bed.

"One minute, my legs were fine, the next, they weren't.

"I tried to get out of bed, and I fell to the floor, my mum decided that I needed to go to the hospital and helped me down the stairs."

Due to being 15 at the time, Aidan, and his stepdad were turned away from the Royal Infirmary and redirected to the Royal Hospital for Children and Young People.

Aidan continued: "After taking my weight and height, they did some blood tests.

"A few hours after, a consultant mentioned that I might have leukaemia, I'd heard of it but wasn't sure what it was.

"After the MRI, the consultant came back and told me that I might not walk again, or any time soon as there were cancerous tumours on my spinal cord.

"When I'm nervous I find things funny, so I just smiled to myself.

"I didn't feel emotional at all at that point - I must have been in shock.

"It was only after a few months that it really hit me."

Aidan spent two weeks in the children's ward with several visits to radiotherapy and twice daily physio to help regain strength within his legs.

He also spent time within the Teenage Cancer Trust unit.

He received two rounds of radiotherapy and then four rounds of chemotherapy.

He said: "When I moved wards, it made a big difference as I wasn't sat in bed all day bored anymore.

"There was an electric hoist in my room which made it easier for me to get in and out of bed.

"This allowed me to get into my wheelchair and out into the unit's Snug, which has game consoles and a big TV. I could also spend time out in the garden and chill out.

"After noticing how down I was, the support coordinator, Connor, even invited my friends' round to hang with me for a while to take my mind off things."

Aidan finished chemotherapy in August 2021 and he was discharged on December 23.

His mum, Emma, said: "Seeing Aidan ring his end of treatment bell was like a dream come true.

"It was like a huge cloud had been lifted off of all of us.

"To get him home for Christmas was the best present we could have wished for."

He now only goes to hospital for physio to help him learn to walk again and for his monthly hoods with oncologists.

The young man is sharing his story to encourage other teenagers to get checked out when they experience pains.