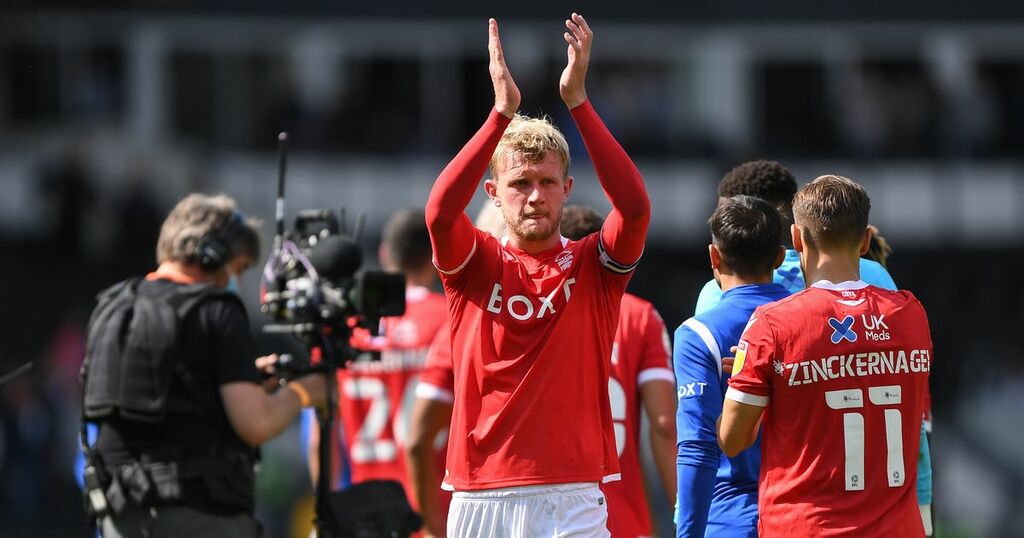 Defender Joe Worrall is aiming to quickly erase from memory the damning stat about Nottingham Forest suffering their worst start to a season for 108 years.

In typical fashion, the 24-year-old has issued a rallying cry ahead of tonight’s clash with Middlesbrough, insisting optimism remains high that the Reds can turn their form around.

Chris Hughton’s side are propping up the Championship table with six games gone, having registered just one point so far.

Falling 2-1 at home to Cardiff City at the weekend was their fifth league defeat of the campaign, but Worrall says it is too early to pass judgement on the team

“We are a team with bags of talent. We’ve got a great manager. We’ve got players who can come off the bench and impact in a positive way. And we need to think about picking up points, it’s as simple as that.

“We can’t look at that stat and think, ‘oh, it’s the worst start to a season in 108 years’. What about if we pick up nine points from the next three games? We’d be on 10 points then. When does the start of the year actually start, if you get what I mean?

“If we lose the first game of a season every year, it’s, ‘oh, it’s the worst start we’ve had for a year’.

“Those stats are rubbish really. You can’t judge a team and league position until the end of the season, until you’ve been home and away against every team. That’s when you can really slap a stat on it and say, ‘that goes down in the history books’.

“All this stuff about it being the worst start, it can be erased from memory if you pick up a win.”

The miserable run of results has left manager Hughton under increasing pressure, but Worrall says the players remain firmly behind him.

“We’re all very much heading in the same direction. We’re all optimistic,” said the centre-back.

“If there isn’t any optimism, in terms of picking up points and winning football matches, then it will quickly be stamped out. We don’t want any negativity.

“The coaching staff and everyone involved around the club, they all come in every morning very professional.

“The manager keeps saying that we’re probably one of the quieter groups he’s had during his managerial career. That’s probably down to the age of the squad.

“We’ve got some younger players who have come in, lads who are playing their first season at the club, they’ve quickly got to get up to speed. They’ve got to realise what it takes to play for this club.

“You look at the league table, yeah, it’s not great, but there’s so many games to go.

“We constantly have to look at bettering ourselves. We just need to think on a positive note, glass half-full every time, because otherwise there is no point.”

This summer saw a big turnover of players from the 2020/21 squad, with a total of 18 players departing since the end of that season and 10 signed in the transfer window - albeit one of those who left was James Garner, who then rejoined the club on loan.

Asked if Forest are better equipped to come through a tough period than they were 12 months ago, Worrall said: “It’s always nice to look at things on paper, look on Wikipedia and go, ‘he’s scored 40 goals in 100 games for that club’ and whatever. But you don’t know until you’re actually in the environment and playing, come to the Nigel Doughty Academy and get to know how we do things around here, that you can actually really judge a player.

“That’s something we’re still working on. We’ve still got a few players (Braian Ojeda and Mohamed Drager) to come in who are self-isolating and haven’t come in the building yet.

Does Worrall have a point? Have your say in the comments below

“Football is a very, very simple game. If you score more goals than your opponents, you win the game. That’s what we need to do.”

There is no question of the mood dropping in the dressing room, according to Worrall.

While not making light of the team’s position in the table, he says there is a determination to stay positive - led by the example set by the manager.

“I don’t think we’ve got too many ‘Debbie Downers’ in the dressing room. Everybody is fairly optimistic,” Worrall added.

“Yes, the fans are frustrated. I’m frustrated, in a way. Everybody is frustrated. But you can’t look too far into the future.

“We’ve played six games. If the league finished after 10 games, then, yeah, I’d be pulling my hair out. But it’s a long season.

“We’ll have to wait and see who’s up for it when it’s a cold, wet City Ground. I’ve got no doubts we’ve got the men in our dressing room to provide something.

“Last season was definitely a steadying-the-ship kind of season. This season, at the start, everybody is optimistic - everybody.

“But you cannot let that optimism fizzle out after just six games. That’s something I’m trying to tell myself in my head as well - you’re never out of this league.

“With Dane (Murphy, CEO) coming in, and with the way we’re going about our transfer business - if we’re going to do it differently, everybody needs to buy into that.

“There’s been so many comings and goings at the club over the past couple of years. If the situation is going to change and we’re going down a different route, it’s got to be that everybody buys into it.

“If we’ve got Chris Hughton as the manager, he’s somebody who will keep the ship steady. His emotion never changes - if you win, you win; if you lose, the next game is what you focus on.”