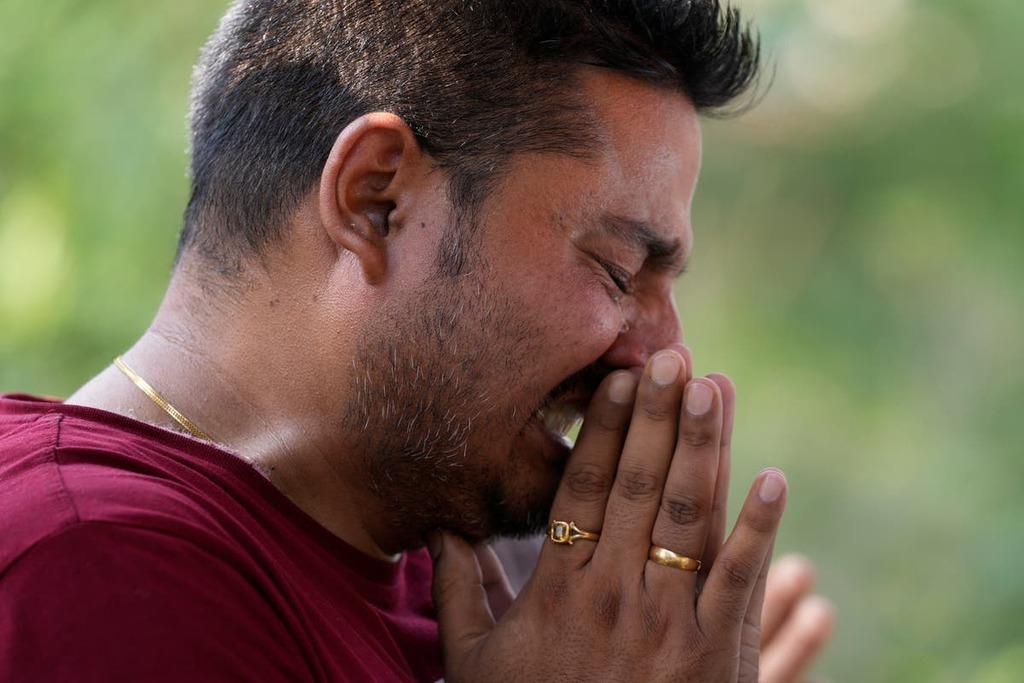 After 12 years, 75 Pandit families hit the streets expressing deep sense of fear and despair about an uncertain future.

Government employee Rahul Bhat, who was shot dead by terrorists inside his office in central Kashmir’s Budgam district, was cremated on Friday amid a protest by members of the Kashmiri Pandit community here.

Rahul Bhat was gunned down by terrorists inside the Tehsil office in Chadoora town on Thursday. He had got the job of a clerk under the special employment package for migrants in 2010-11.

As the mortal remains of Rahul Bhat reached his home in Durga Nagar area of Jammu on Friday morning, his relatives wept inconsolably.

Rahul Bhat’s wife and daughter, who were putting up with him at Sheikhpora migrant colony in Budgam, accompanied the body as it arrived here from Kashmir.

His brother Sunny lit the pyre at the Buntalab cremation ground as chants of "long live Rahul Bhat" rented the air.

Meanwhile, hundreds of Kashmiri Pandits gathered at Bhat's house in Jammu for the last rites.

The community members, including Rahul Bhat's family, accused the BJP-led government at the Centre of making young Kashmiri Hindus "cannon fodder" in the name of rehabilitation of the community.

They also said the incident has shattered their dream of resettling permanently in the valley.

“You (BJP) have formulated a plan to get young Kashmiri Pandits killed in the name of giving them jobs and rehabilitating them," Soon Nath Bhat, a relative of Rahul Bhat said.

Such people are “sitting ducks” for terrorists who are using them for “target practice”, he added.

Jammu and Kashmir BJP president Ravinder Raina and other party leaders, who attended the funeral, had to face the ire of the community members as they raised slogans against Prime Minister Narendra Modi, Jammu and Kashmir Lieutenant Governor Manoj Sinha, and the saffron party.

The protesters also blocked a stretch of road.

On Thursday, Rahul Bhat’s father Bita Bhat had demanded a probe into the incident.

“An inquiry should be ordered into the incident to identify all those who are involved in his cold-blooded murder,” Mr. Bita Bhat said at his Durga Nagar residence.

"I was at a hospital accompanying my ailing brother when a family friend called from Kashmir and informed me about the incident. I tried to contact the deputy commissioner of Budgam and the concerned police officers, but my calls went unanswered,” the father told the media persons, trying to put up a brave face and hold up his emotions.

He said it was the responsibility of the deputy commissioner to at least inform the family as his employee was killed inside his office chamber in broad daylight.

“If a person is shot inside his office, nobody is safe in the valley…when such a thing has happened it is a glaring example of the government’s failure. Those serving (among the Kashmiri Pandits) there are doing it at their own risk as the government has failed to provide security to them,” he said.

Tears rolling down her cheeks, Rahul Bhat's mother Babli asks the government to "return" her son.

A relative of Rahul Bhat broke down before the media.

“They have taken our children for dying there and not for jobs.” Rahul Bhat’s neighbours said he was a thorough gentleman, and the news of his killing came as a shock for them.

Rahul BhatKashmir (Geopolitical Entity)JammuBJPChadoora
Sign up to read this article

After 12 years, 75 Pandit families hit the streets expressing deep sense of fear and despair about an uncertain future.