Sky advance to WNBA Finals after beating Sun in Game 4 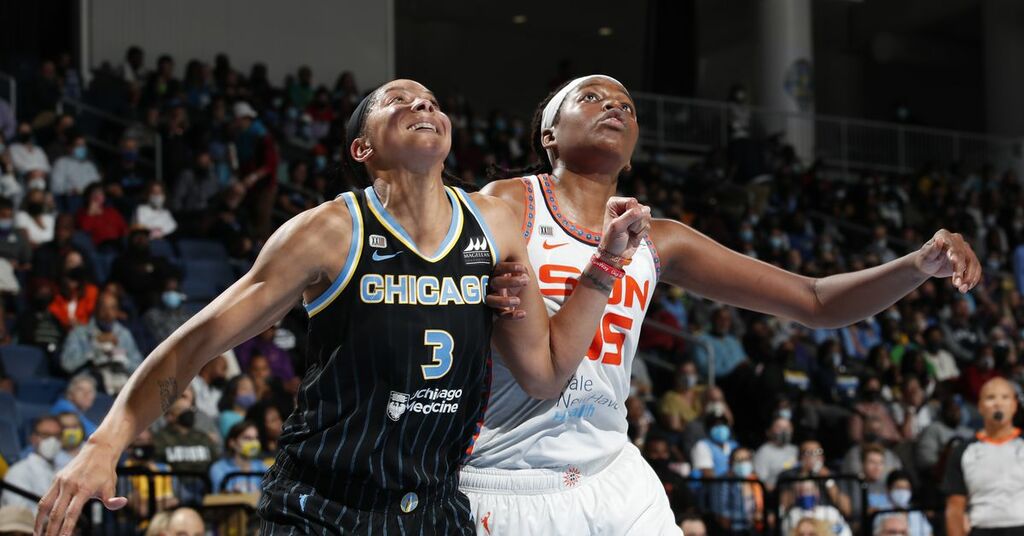 An astonishing thing happened Wednesday night in this WNBA town without a title.

The Sun set in the Chicago Sky.

And it was spectacular.

The Sky made history becoming the first No. 6 seed to punch their ticket to the Finals with a 79-69 victory against the No. 1 Sun. The Sky will face the winner of the Aces-Mercury series, which is headed to a Game 5 on Friday.

“We felt [we could make it to the WNBA Finals] from the beginning of the playoffs,” Sky coach/general manager James Wade said. “If I said it out loud people probably would have looked at me strangely, but here we are.”

Kahleah Copper said before Game 4 that the team had no intention of making the trip back to Connecticut for a Game 5 and it played like it from the jump.

Courtney Vandersloot led the team with 19 points and four assists. Candace Parker added 17 to go along with her nine rebounds and seven assists. Copper finished with 18 points, six rebounds and two assists.

This is the Sky’s first trip to the Finals since they were swept by the Mercury in 2014.

The Wintrust Arena crowd of 8,311 included members of the Red Stars and the Bulls, along with Scottie Pippen and Tamera Young, who spent over seven years playing for the Sky. Chance The Rapper sat courtside and Mayor Lori Lightfoot was in her seat by halftime.

Briann January was out for Game 4 after aggravating a previous lower-leg injury in Game 3 on a late breakaway layup attempt. Her stifling defensive presence was an absence felt by the Sun, and the Sky capitalized on it.

Vandersloot was aggressive from the moment the ball was tipped, taking a three from the wing to get things started. The shot was one Vandersloot has taken and made countless times before, but taking it that early in the game is unusual. She tends to get her teammates looks before taking her own.

As she looked up into the stands after the Sky secured their trip to the finals, she got emotional thinking about everything it has taken to get to this moment.

“When we finally got that core group, Kahleah and Diamond [DeShields], and began building around players that wanted to be here, we had something very special,” Vandersloot said. “I knew it because of the previous seasons. So, it was an easy sell to Candace.”

Parker’s presence has undoubtedly been the difference between the Sky settling for a playoff appearance and playing for the franchise’s first WNBA title. Through every stage of the playoffs, her greatness has been felt. She’s kept the team together in moments of breakdown and helped players tap into other levels of their game.

She has been the other piece to the veteran puzzle that Vandersloot and Allie Quigley have needed in previous years. It’s time to throw the 16-16 regular-season record in the trash.

This is the championship-contending Sky team everyone predicted they would be when Parker signed with the Sky in February.

“This is a special group,” Parker said. “The way you face adversity has built our character and revealed it. All of us believed going into the playoffs that we would be sitting here.”