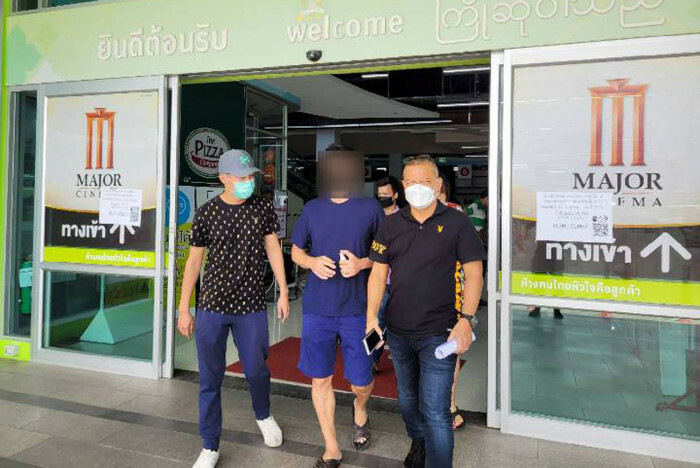 A boat captain accused of abusing six Cambodian workers and cheating them out of their wages has been arrested in Samut Sakhon after almost five years on the run.

Police officers from the Anti-Trafficking in Persons Division arrested Somwang (last name not disclosed), 59, at a department store in Muang district.

He was wanted on an arrest warrant issued by the Nakhon Si Thammarat provincial court on Sept 26, 2016 for colluding in human trafficking by forcing labour. He was also wanted for breaching migrant labour and customs laws on four other warrants issued by other provincial courts, said Pol Maj Gen Siam Boonsom, the division commander.

A Cambodian man identified as Tor told investigators that Mr Somwang and a man identified as Charnchai, the owner of an offshore oil vessel, offered to pay him and five compatriots 9,000 baht a month each to work on the ship.

The six men agreed, but after working at sea for one month, no wages were paid. Mr Charnchai reportedly told them they would have to work for a year and would be paid then.

While working on the vessel off the coast of southern Thailand, the men could not contact their families or relatives, and they were never allowed ashore.

After completing their year of work, they came ashore but were still not paid. They petitioned the relevant agencies and also filed a complaint with Khanom district police in Nakhon Si Thammarat. Investigators subsequently sought approval from the Nakhon Si Thammarat court to issue warrants for the arrest of the two suspects.

Mr Somwang had fled to other provinces before he was caught in Samut Sakhon, said Pol Maj Gen Siam. Mr Charnchai was arrested earlier and sentenced to jail but further details were not available.

The suspect denied all charges before he was handed over to Khanom police for further legal action.